Analysis: French scrum will benefit with Eddy Ben Arous involved but there is room for Rory Best to prosper

In a game as scrappy as France's win against Scotland last Saturday, there was a surprising lack of scrum action, with the sides packing down just seven times in the 80 minutes.

Luckily for Ireland however, five of those scrums came in the second half, and involved replacement loose-head Eddy Ben Arous, but on the downside, he was a damn sight better than the man he replaced at half-time, Alexandre Menini.

Despite the small amount of scrums (there was double the amount in Ireland's win against Italy), we saw enough of the French front row in action to see that they'll be a much greater force at the set piece than the Italians were last Saturday. 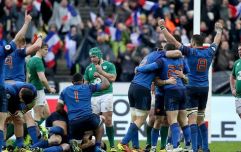 END_OF_DOCUMENT_TOKEN_TO_BE_REPLACED

The Scots got the better of the opening two scrums, winning a penalty on the second drive of the day, while they could have been awarded two different penalties on the very first scrum.

This scrum was ultimately reset, but Menini was incredibly lucky not to concede a penalty.

In the photo below we can see how everything is as it should be before the ball is fed. Both front rows are square, while the great aerial shot shows the different binds the French pops are using. Menini is bound across his hooker, Guirado, while Slimani is bound low on the back.

This helps each prop remain bound, as crossing arms over each other can make the bind uncomfortable, and ultimately easier to break. 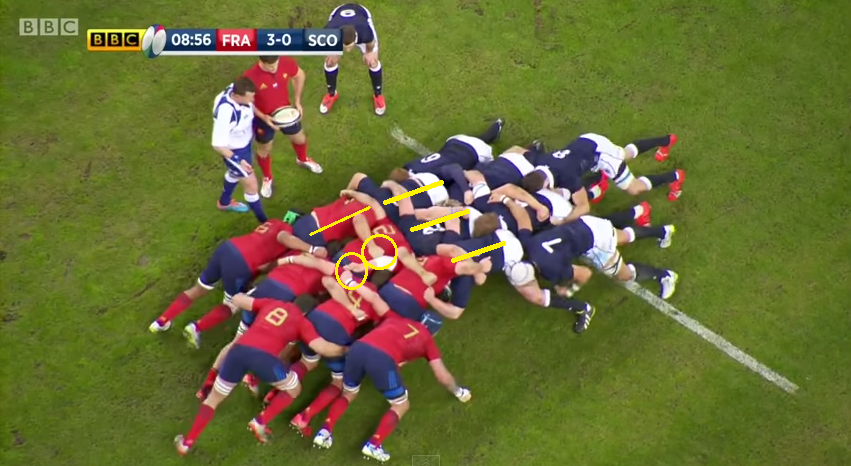 However, once the ball is fed by Rory Kockott, we can see below that Menini immediately begins to turn his shoulders inwards, illegally driving up through Euan Murray's chest, and forcing the Scottish tighthead to pop out of the scrum (his head is circled).

Nigel Owens decided to reset, rather than penalise Menini, and it's a big let off for France. 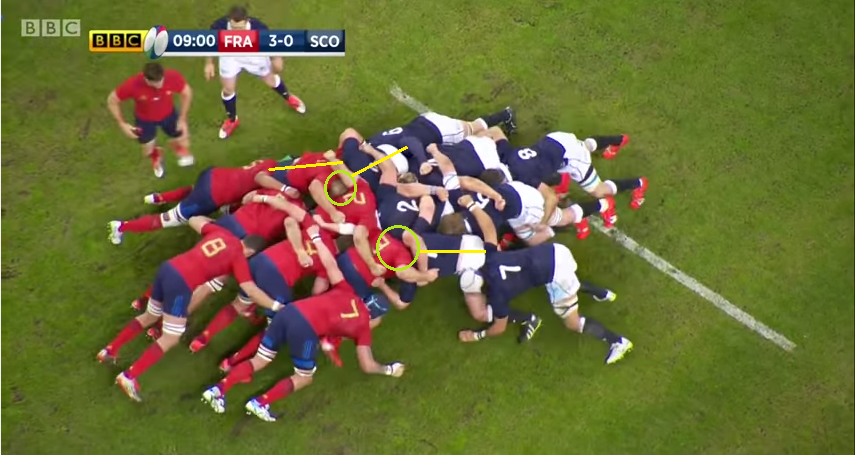 Again, they get a let off on the reset, although this time Slimani looks to be the culprit at tight-head.

Below you can see how Slimani is bound illegally on Alasdair Dickinson's arm. 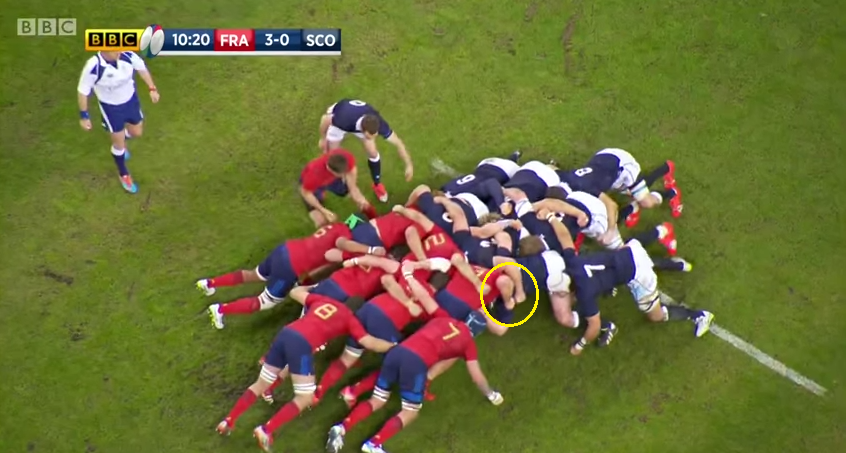 Here's a much clearer photo, the X marking where Slimani should be bound. 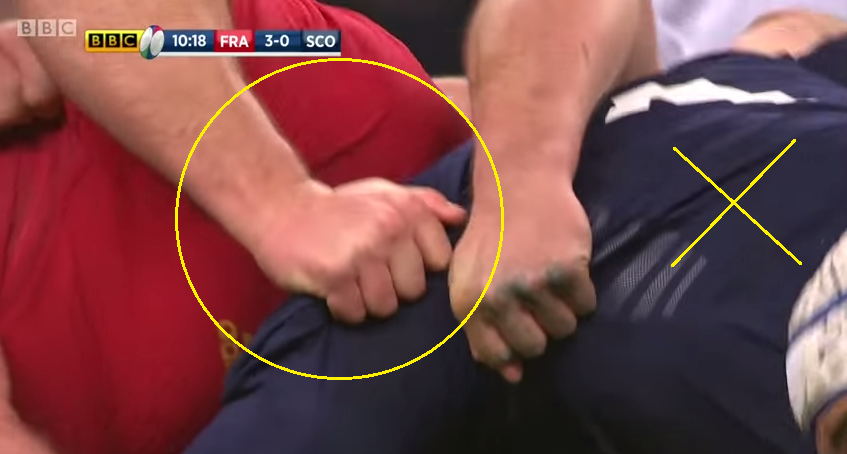 As we show below, this scrum ultimately collapses because Slimani's bind drags Dickinson to the floor, but Owens seems to miss it, as France retain possession. 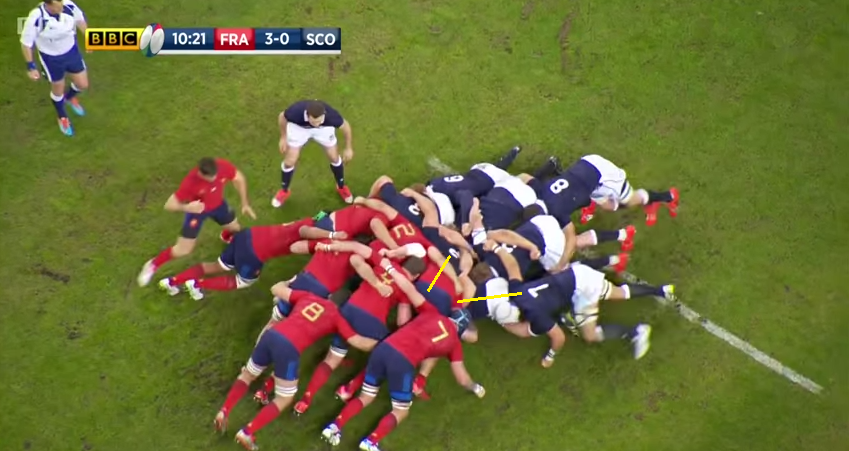 Owens does penalise France on the day's second scrum, however, as Menini is pinged for "hinging", as Alexandre Menini drives up, and then downwards, resulting in the scrum collapsing.

In the first photo below, we can see how Menini drives upwards... 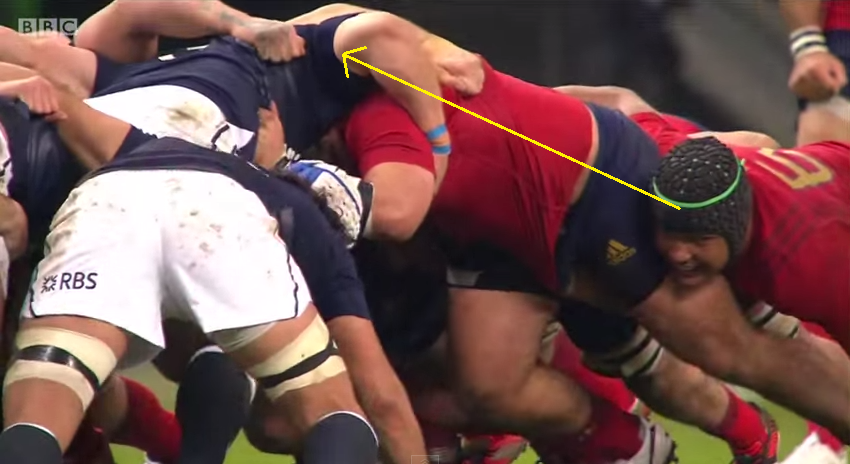 Before he sends it back down again. Murray's bind is probably a little short, but it seems to be under the armpit, which a lot of referees find acceptable. 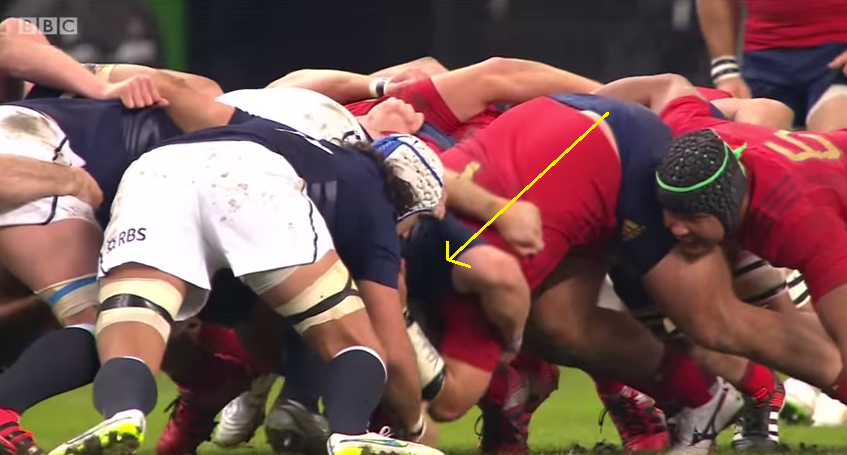 Here is is in one GIF, and note how the shift in height is all coming from Menini's waist, and not from bending his legs. This is a clear sign of a prop hinging.

The balance of power in the scrum certainly shifted with the second half introduction of Eddy Ben Arous at loose-head for the second half, and while he was penalised in this instance for dropping his bind, he can count himself very unlucky.

Before we get to the dropped bind though, we're going to look at an area of Rabah Slimani's game that hooker Rory Best can look to exploit this Saturday.

In this aerial shot, before the scrum, we can see just how big a gap there is between Slimani and his hooker. This type of gap is asking to be exploited, and it's something Rory Best should be waiting to attack, which would then isolate Slimani from the rest of his front row.

Note the comparison in the gap between Slimani and Guirado, and then the much tighter space to Ben Arous. 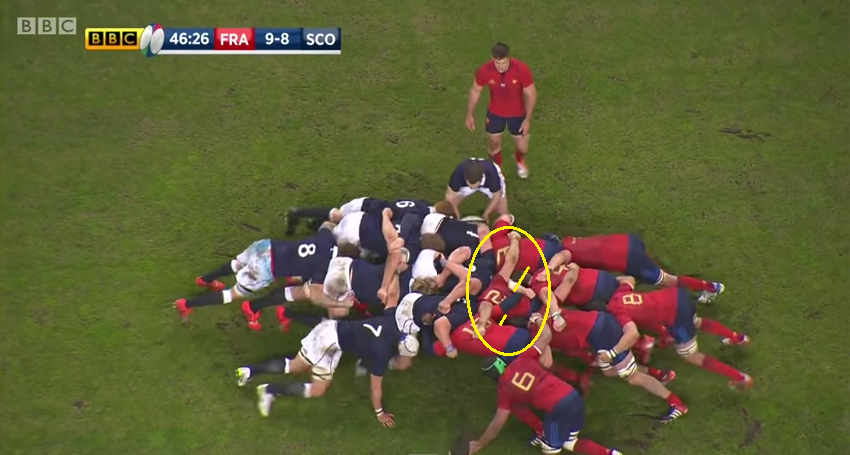 Ben Arous gets penalised for losing his bind at this scrum, Euan Murray can count himself extremely lucky.

To begin with, Euan Murray is bound illegally to Ben Arous's arm. Note how Murray's arm is pointing to the ground. This is often an easy way to spot an arm bind, as a legal bind would usually leave his forearm parallel to the ground.

As the scrum develops, Murray begins to pull his opponent by the arm, causing his body to turn inwards, and towards the ground. The X in this instance indicates where Murray really should be binding. 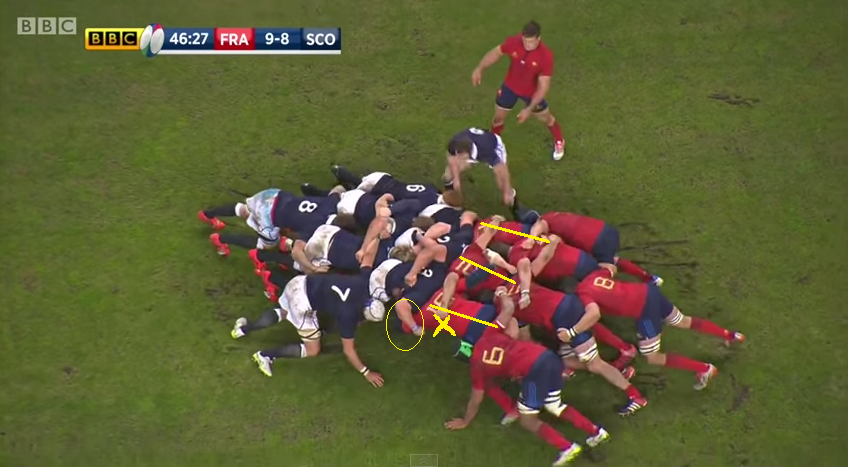 Not only does this cause the scrum to collapse, but Murray is also guilty of dropping to his knees, as seen below.

Owens decides to penalise Ben Arous rather harshly, although the early signs are clear that the replacement is proving to be a far more stable scrummager than the man he replaced. 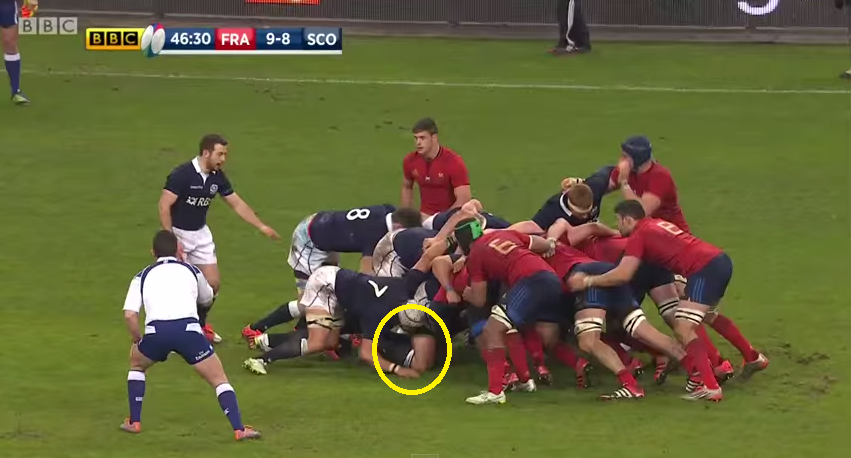 The French scrum, and in particular Eddy Ben Arous do get their reward soon after though, as Murray finally pinged is pinged for his poor bind.

In this initial still-frame, we can see the Frenchman has his body angles perfect, while Murray's bind looks dodgy, with his arm pointing downwards. 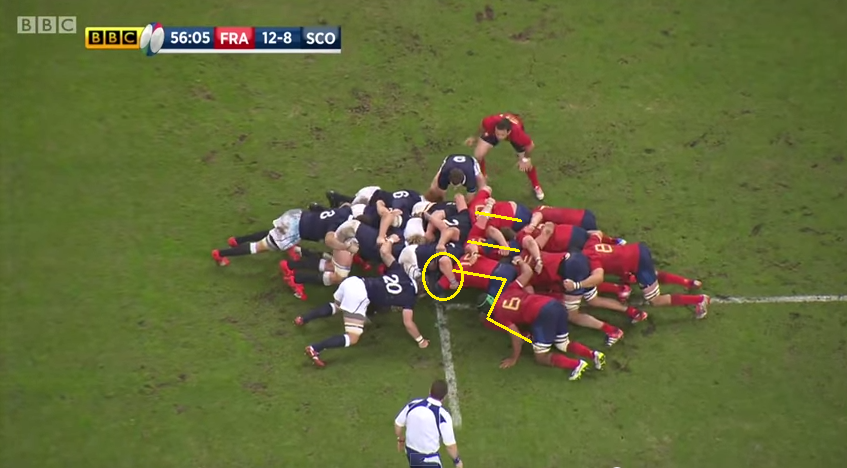 And as the scrum collapses, he leaves Nigel Owens with a pretty easy decision. Penalty France, and another three points for Camille Lopez. 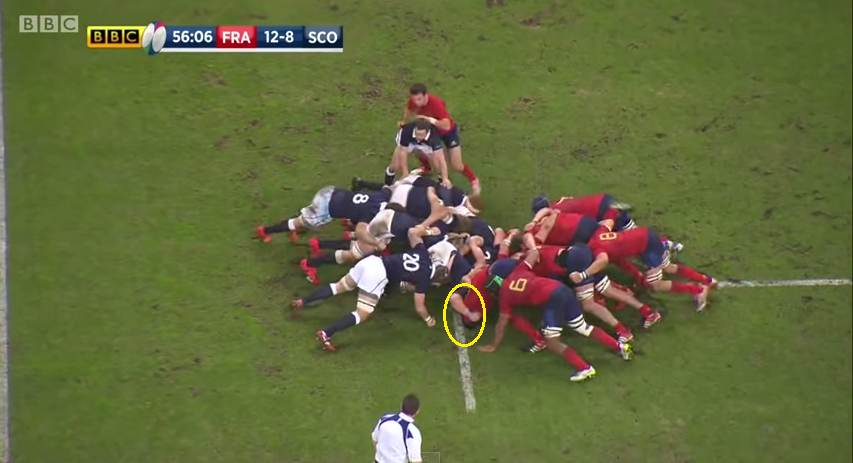 With 10 min left in the game, France's best scrum of the day puts the Scottish front pack in all sorts of bother, and would have resulted in a turnover had the ball left the scrum a fraction of a second sooner.

It's something that the Irish pack will have to be really wary of, and it's an example of a perfect, legal wheel that comes ever so close to a turnover.

To start with, we'll look at how the scrum is set before the ball is fed. Note a couple of things. Firstly, the front rows are straight and square. Secondly, note the yellow line running from top of the screen to the bottom. This is the axis on which we can judge the we can judge the wheel.

And thirdly, note the bind from Scotland's Geoff Cross (circled). This is a much longer, and much more legal bind, and it allows Ben Arous to go on the attack, without fear of the scrum being dropped. 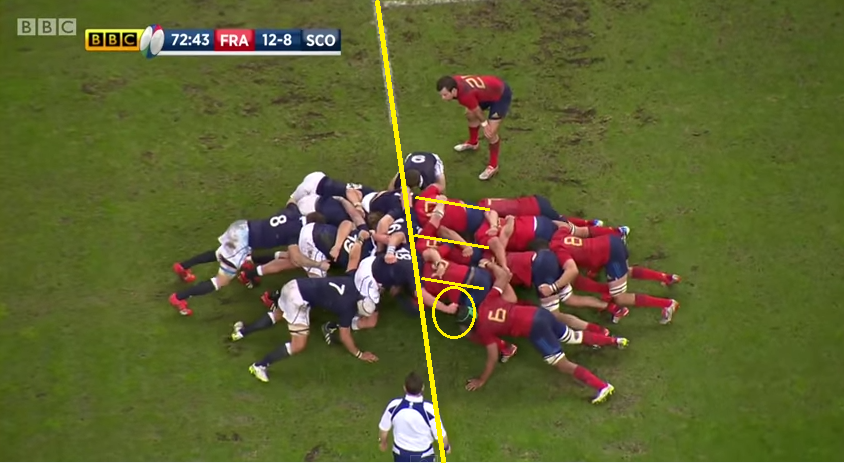 Once the ball is fed, Ben Arous begins to attack. He drives straight and cleanly on Cross, and begins to shift the scrum on his side. Meanwhile, the mammoth Uini Atonio acts as the anchor, holding or driving minimally, allowing the scrum to wheel around. 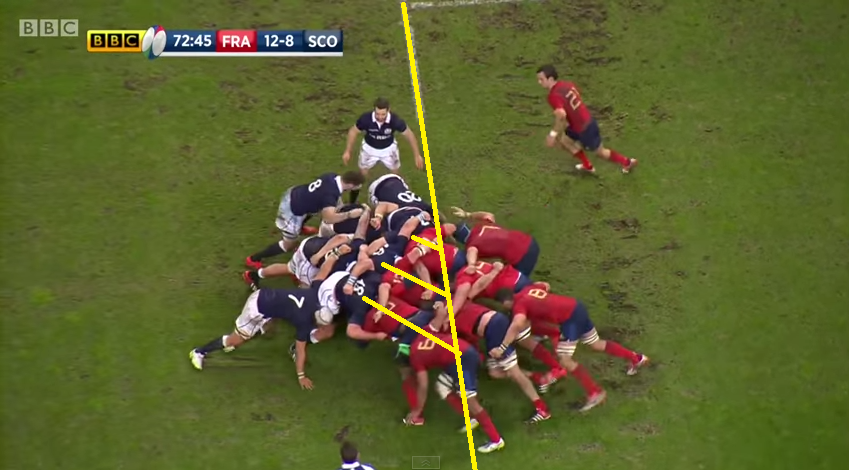 From here, the Scottish scrum is under more and more pressure.

The French step up the drive, and eventually it has shifted 90 degrees, enough for Nigel Owens to reset the scrum and award France a turnover.

However, Owens seems to be feeling generous and lets it slide, possibly due to Scotland's Johnnie Beattie getting the ball out of the scrum just as the wheel reaches 90 degrees. An understandable decision. 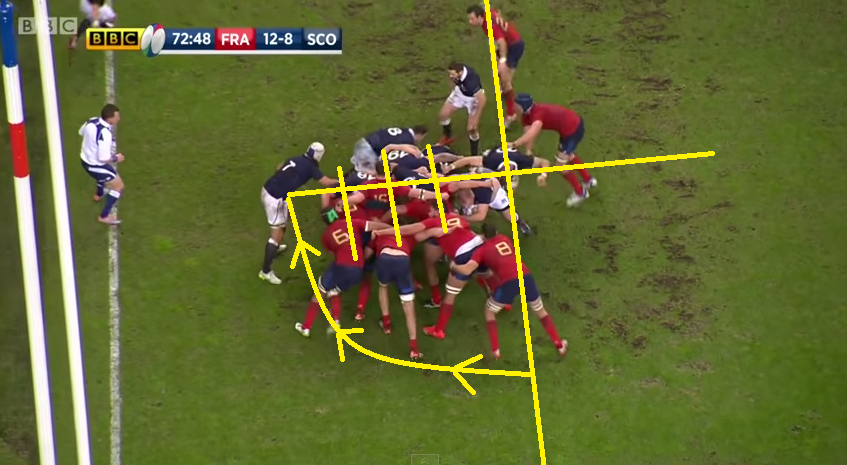 France didn't get their turnover, but it did show that the have a pack, and a loose-head in Ben Arous, that is capable of causing a lot of problems (and legally so, praise God), at scrum time.

Ben Arous's introduction was the start of a real change of fortunes for the French scrum, and with him starting this weekend, Mike Ross will have to raise his game even further, after his impressive performance against Italy.

The key for Ross will be patience. In his last two games, he's benefited from attacking less, and letting his natural strength anchor the scrum.

Playing the referee will also be crucial. Wayne Barnes has a habit of making his mind up about the scrum early on, and any early infringements will hang over Ross for the rest of the game.


popular
GAA club transfers that shocked the county: Jason Sherlock
Jordan Larmour enjoys satisfying bit of revenge on Mack Hansen
Fermanagh footballer opens up about losing her mum to suicide and urges people to seek counselling
Here's all the GAA games on the tube this weekend as the provincial championship heats up
Ruesha Littlejohn gate-crashes Katie McCabe's interview after another player-of-the-match display
Roy Keane's three leadership tips he gave to Owen Farrell can't be argued with
Kieran Donaghy vs Tommy Walsh - The 'Twin Towers' reunite this weekend
You may also like
5 years ago
France v Ireland: Player ratings for men in green that could not hold the blue tide
5 years ago
PIC: Paul O'Connell having the craic at Stade de France has instantly raised our spirits
5 years ago
Relive the breathless British press reaction to Brian O'Driscoll's Paris hat-trick
5 years ago
Guy Noves sums up French mentality for Ireland game better than we ever could
5 years ago
Welcome fitness boost for Ireland after Stade de France captain's run
5 years ago
Joe Schmidt's startling admission on how little Ireland have trained this week
Next Page