From 'Ireland by 10' to 'England by 74', the expert predictions on Sunday's Triple Crown decider have gone from one extreme to the next.

Sean O'Brien could not believe his ears when he heard Mike Tindall's hot-take.

This Sunday at Twickenham sees Ireland visit to Twickenham to see if they can beat England and claim a Triple Crown in the process.

In advance of that massive match, House of Rugby's Irish and UK shows got predictions from some true legends of the game, past and present.

SEAN O'BRIEN: Ireland by 7. We'll hopefully see a little more of what they are trying to build, and they showed glimpses of it the last time. They'll also be very unhappy about the last time the two sides met [when England won 57-15 in a World Cup warm-up] and emotions will be charged.

JAMES HASKELL: England by 5. I think they will have improved after the win over Scotland and after the loss to France, when they didn't pull the trigger on anything... it's at home and I think England will play some good rugby and, hopefully, get the upper hand.

Tindall was off on a ski holiday but made sure to get his predictions into the show's WhatsApp group. Knowing, at this stage, of his panto villain status in Ireland, Tindall has predicted a 74-point England win. Upon learning that, Sean O'Brien remarked: 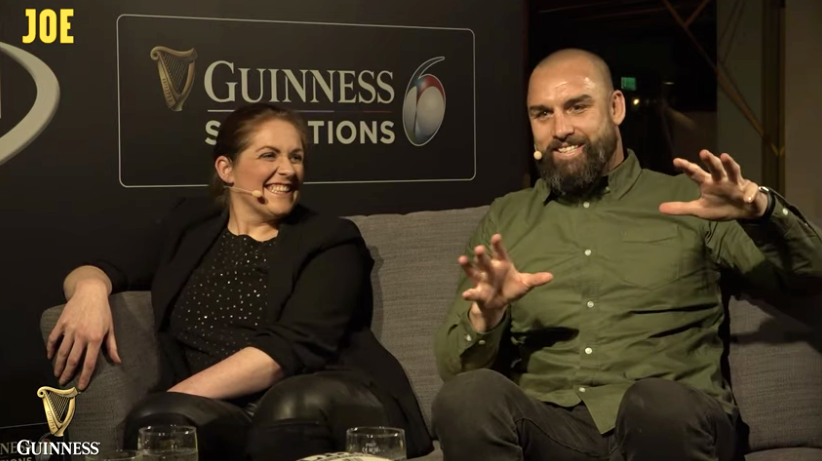 Murphy, Trimble and Flannery are all in the House of Rugby (Ireland) league and taking part in the Guinness Pint Predictor on the Matchpint app. After two rounds of the Guinness Six Nations, Trimble has had to carry out two forfeits so he went with his head, rather than his heart, with his big Ireland vs. England prediction.

JERRY FLANNERY: I don't think it's going to be of that scope. I think Ireland by 4.

"He's going for the homeland!"

Later in the show, with Coghland and Fardy both on the couch and looking ahead to the big game on Sunday, Barry Murphy got their expert takes.

FIONA COGHLAN: I'm going to go Ireland by 3. As I said, I think squad selection is right. I think Caelan Doris will get a good run-out, as well, but I think squad selection is right. Not just that they've won the previous two games but because of the manner in which they're performing and the manner in which they're going. I think the players are confident and in a good place as well.

BARRY MURPHY: The 23 are important, and off the bench.

FIONA COGHLAN: Oh yeah, look, I know they're not just subs or replacements anymore; they're finishers. It's really important, the strength of your bench is so important, particularly you see when props know they're only going to get 50, 55 minutes and then there are going to be changes. So, yeah, the power of the bench is going to be important. So Ireland by 3.

SCOTT FARDY: Yeah, I think Ireland by 10... without the Vunipola brothers, I think England are a different side. Obviously Billy taking the amount of tackles that he does, every time he carries, you see on the back of that the other players don't get the go-forward that they get on the back of Billy.

So, tallying up the predictions from the two House of Rugby shows, that leaves up at ENGLAND 3, IRELAND 5.

It will be fascinating to see how it all plays out on Sunday afternoon at Twickenham.