England's scrum - and Joe Marler - will be a weapon, but not if Craig Joubert polices it correctly

Whether he starts up against Mike Ross or Marty Moore this Sunday, referee Craig Joubert will need to keep a close eye on the loose-head, whose angled drives have become a key weapon for both Harlequins and England. 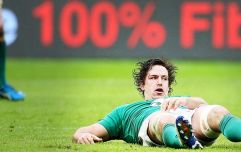 END_OF_DOCUMENT_TOKEN_TO_BE_REPLACED

The problem with that weapon though, is that it's both illegal and dangerous.

While Marler doesn't bend the rules on every scrum, he can pull the wool over the eyes of most referees, and it's a feature of it's scrummaging that will likely rear its head at the Aviva.

It was something he's tried on Mike Ross, in particular, plenty of times in the last 12 months.

In this fixture last year, Marler resorted to the illegal tactic after Ireland had dominated the opening scrum of the game.

When the sides packed down for the following set-piece, the initial set-up seemed normal - Ross and Marler were locked square and straight. 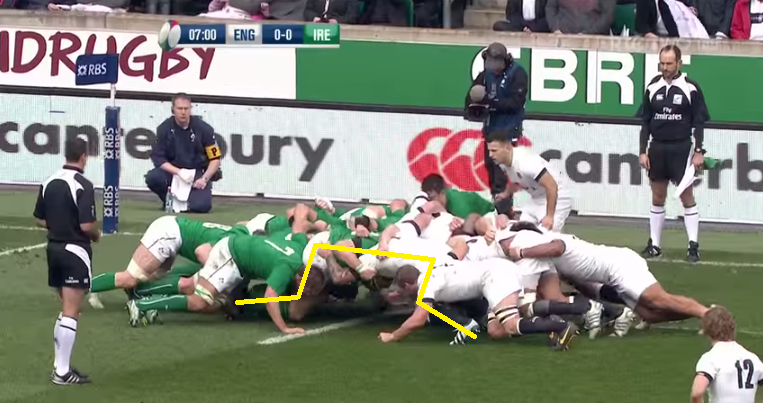 But once the ball is fed, Marler begins to drive upwards, and across Mike Ross' chest, although it's ignored by referee Craig Joubert, who just so happens to be the man in the middle again this weekend. 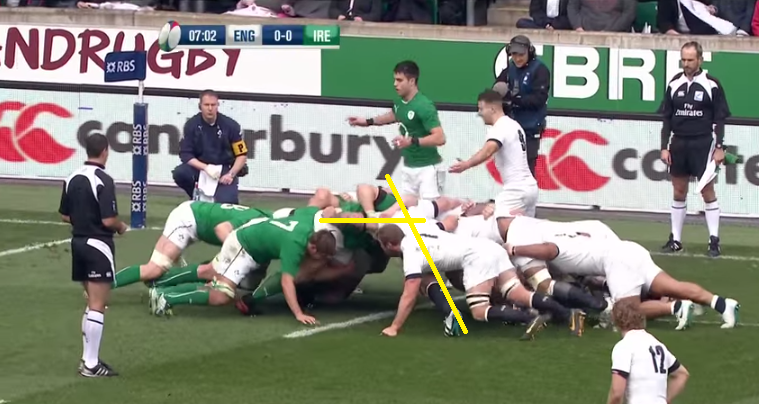 And he tried it again later in the half, causing Ross to pop up completely out of the scrum. Again though, Joubert misses it. 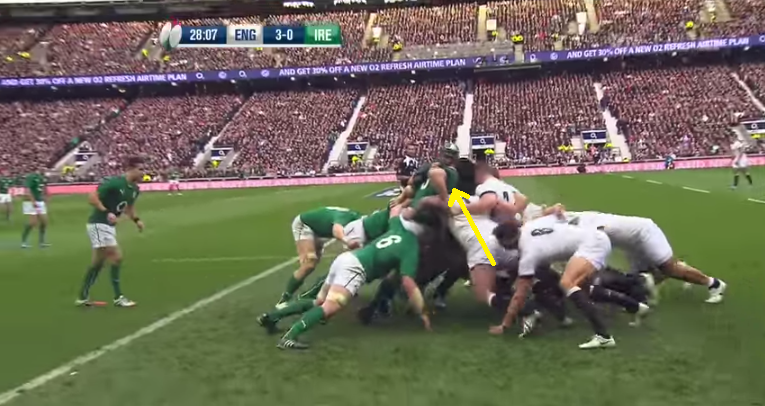 While Joubert didn't penalise Marler for this type of driving 12 months ago, French referee Jérôme Garcès actually rewarded him for it when Marler and Ross crossed paths again in December's Champions Cup meeting between Leinster and Quins at the Stoop.

Marler continuously drove hard and upwards across the chest of Ross on the day, winning penalty after penalty, with the BT commentator Matt Dawson heaping praise on him for his illegal scrummaging.

"All loose-heads drive up. That's just a shoeing.

"We can get too technical about it if we want. Mike Ross has dealt with plenty of loose-heads that work a worse angle than that," he said at the time.

But it's not just against Mike Ross that Marler has been bending the scrummaging rules. It's been a feature of his game so far in the Six Nations.

In the opening scrum of the championship against Wales, Marler gave Samson Lee a real "welcome" when he bored in on the prop, although karma got the better of him, as Toby Faletau set up Rhys Webb to touch down off the first phase.

When the packs set down, everything was straight and square... 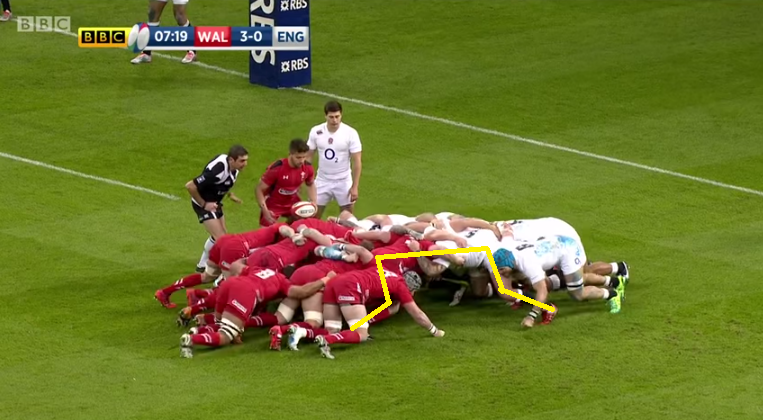 But once the ball was fed, Marler turned inwards, driving up and under Lee's chest. 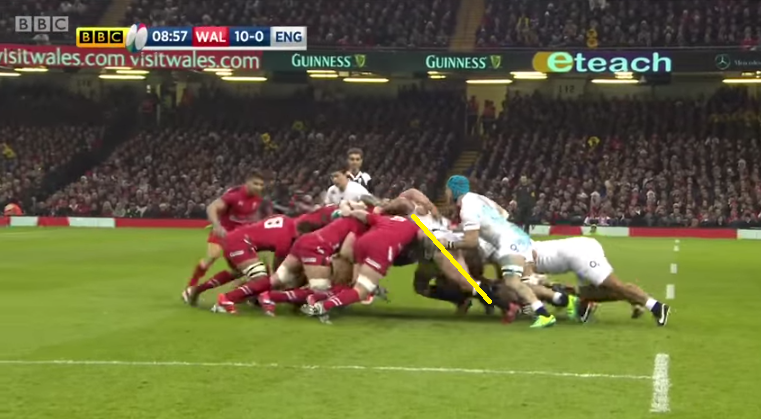 Watch how he drives across in the gif below, and ultimately how the move backfires on England.

He used the illegal technique regularly during their big win over Italy in round two, and it was something completely ignored by referee John Lacey.

On the opening scrum of the day, Marler went on the attack again.

This aerial shot directly above the scrum shows how Marler alters his angle just as the ball is about to be fed. Note the difference between the lines Cole and Hartley are taking, and that of Marler. 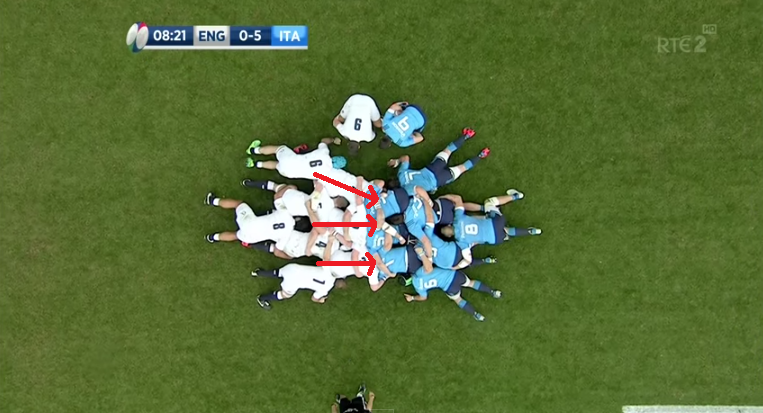 This angle of driving means that Martin Castrogiovanni is driven upwards, bending his neck to such a dangerous point that he can no longer breathe, leaving him with no choice but to stand upright and risk giving away a penalty. 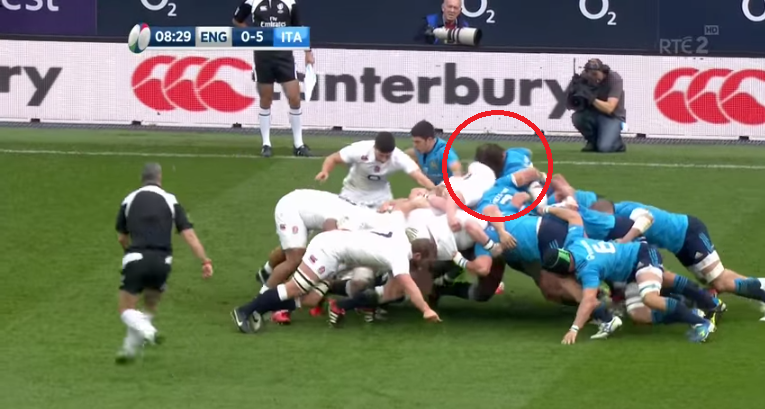 And this view from behind is even more damning. 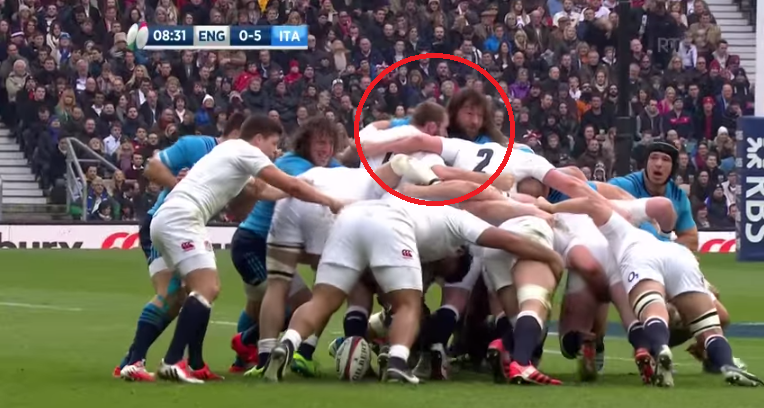 It was ignored by John Lacey, giving Marler licence to do it again.

On the second scrum of the day, it becomes even more obvious.

Before the ball is even fed to the scrum, Marler begins to drive sideways, causing Castrogiovanni to pop up once again, and but for Italy getting the ball out the back of the scrum as quick as they did, it was certain to collapse.

Marler now knew he had Lacey in his pocket, and continued to push the boundaries of the law.

On the third scrum of the day, for once, things looked straight and stable... 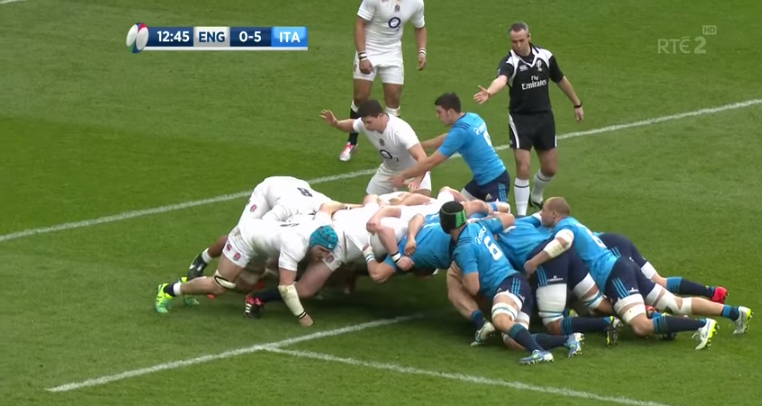 But then Marler began to drive up, to such an extent that his hooker Dylan Hartley couldn't even bind to him anymore.

The camerawork made things awkward on this set-piece, but in the top corner of the screen you can again see Castrogiovanni's head popping up, while Hartley and Marler are also standing with their bind broken. 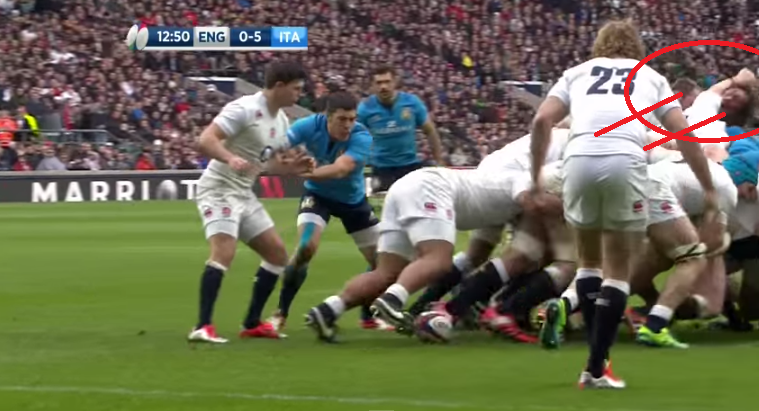 The problem with this technique isn't just that it's breaking the laws of the game, it's that it's dangerous.

The neck comes under a huge amount of strain as it is during the scrum, and when a loose-head drives up and in, he can cause his opponent's neck to bend, burying his head into his chest to such an extent that he can no longer breathe.

And what's so frustrating about seeing Marler do it is that at 6ft and coming up on 18 stone, he's more than capable of destroying a player within the laws of the game.

One such instance was in the second half of that Italy game, when he drove perfectly straight and square through Castrogiovanni, winning a penalty advantage for his efforts.

Compare the angle of his drive in the photo below with some of the illegal efforts above. 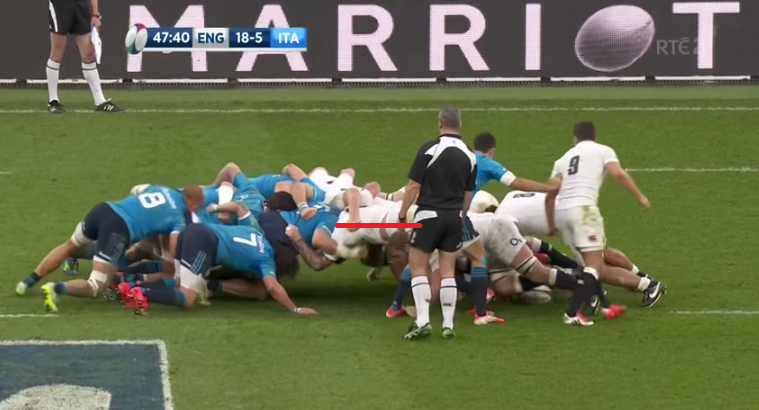 Marler picks up momentum with the drive, and eventually Castrogiovanni pulls him down by the arm, as circled, picking up a penalty advantage from Lacey. 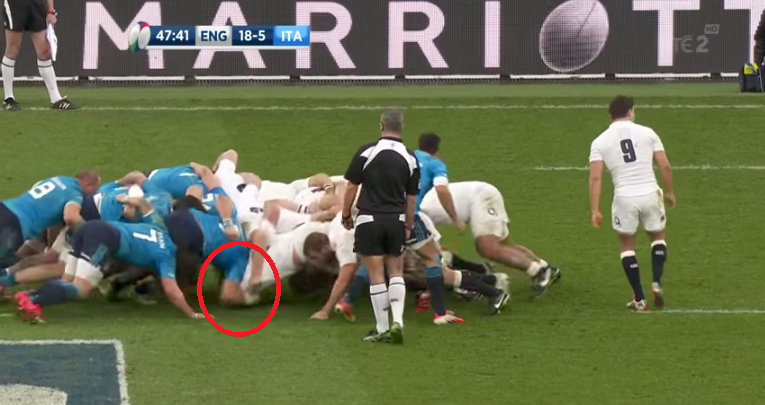 Whether it's Mike Ross or Marty Moore wearing the No 3 jersey for Ireland on Sunday, expect plenty of angled drives from Marler come scrumtime.

And when he does, we may need to rely on Craig Joubert's whistle.

I'm not holding my breath.


popular
Here's all the GAA games on the tube this weekend as the provincial championship heats up
GAA club transfers that shocked the county: Jason Sherlock
Red cards, slips, heroes, villains and last second equalisers - Derrygonnelly's extra time win over Dromore had it all
Fermanagh footballer opens up about losing her mum to suicide and urges people to seek counselling
Jordan Larmour enjoys satisfying bit of revenge on Mack Hansen
Ronnie O'Sullivan on why he staged sit-down protest during UK Championship defeat
Ruesha Littlejohn gate-crashes Katie McCabe's interview after another player-of-the-match display
You may also like
6 years ago
How the British media rated Ireland's performance in drab draw against England
6 years ago
Video: Whatever Michael D Higgins said to Raheem Sterling really pissed him off
6 years ago
VIDEO: Paul Scholes sums up what everybody watching Ireland vs. England was thinking
6 years ago
Opinion: Little gained from sterile phony war
6 years ago
PICS: Irish fan brings son to Aviva Stadium dressed as Incredible Hulk, internet approves
6 years ago
WATCH: Amazing scenes at Aviva Stadium as Jack Charlton is given standing ovation
Next Page