The Munster and Ireland centre is softly spoken but his words hold a lot of weight.

I first met Chris Farrell in 2014 on a trip to France to watch Grenoble prepare for a meeting with Racing 92.

He had opted to join Bernard Jackman's side in the Top 14 after two injury-ravaged seasons with Ulster stalled his progress. Having played in the same Ireland U20 team as Iain Henderson, Paddy Jackson and JJ Hanrahan, he felt a fresh break from the Irish system would do him wonders for a couple of seasons.

END_OF_DOCUMENT_TOKEN_TO_BE_REPLACED

"I'm definitely not happy with what I achieved in Ireland, especially considering where I was when I was 18 and 19," he conceded.

That weekend, at Stade des Alpes, Farrell put in a midfield masterclass and exposed Welsh centre Jamie Roberts' tendency to rush out of the line to score a fine try.

When it came time for Farrell to move on from Grenoble, he had several tempting offers. Ulster, Connacht, Leinster and Munster were all interested, so too were Bordeaux and Saracens. The Fivemiletown native opted for Munster and Ronan O'Gara, on The Hard Yards, told everyone to watch out.

"At six-foot-five and with his variety of skills, he has something to offer at national level that we haven't seen. The guy is the same size as Joe Rokocoko or Donnacha Ryan and he's playing in the centre."

END_OF_DOCUMENT_TOKEN_TO_BE_REPLACED

Farrell has done well at Munster and is three caps into his Test career. He was good against Fiji, better against Argentina a week later and had a stormer against Wales in Ireland's 37-27 victory.

Following the game, Farrell gave us an insight into Ireland's mentality at half-time and praised the men closest to him in the backline - Johnny Sexton and Conor Murray.

He said he was not surprised in any way to get the chance to step in as outside centre when a shoulder injury ended Robbie Henshaw's championship.

"I expected to fit in like that. If I’m in a Six Nations squad, and if Joe is going to select me, I expect to fit in in the same way as anyone else would.

"That’s the expectation that Joe has whether you are second, third or fourth choice, whatever it might be. If you get a chance to be called up you need to fit in the same way anyone else has." 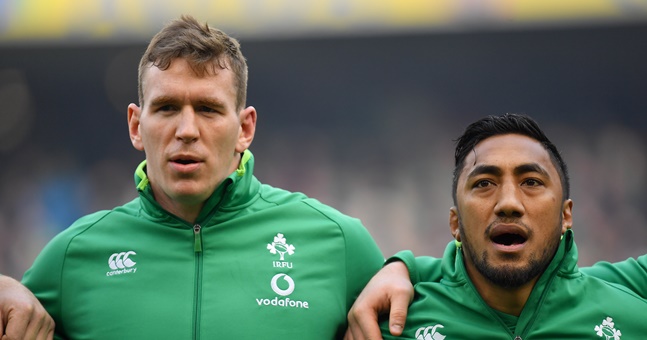 END_OF_DOCUMENT_TOKEN_TO_BE_REPLACED

Farrell is quietly spoken and considered in his words. Asked about the challenge of being an attacking weapon and a defensive organiser, he pondered the question before delivering some lovely comments about what wearing Ireland's 13 jersey means to him.

"I don’t think it needs to be said what is expected when you wear a 13 jersey with Ireland, because of who has been there before and what they’ve done.

"Between Garry [Ringrose], Robbie and Brian O’Driscoll before me, they’ve all been unbelievable and so there’s a certain expectation. And I know it, because I’ve watched them for the last 10 years or whatever it’s been, and they have all done amazing things there.

"So there is a pressure, without a doubt, but, for me, it was almost like going back to the Fiji game I played in November, and just trying to fit in. Then whatever else goes with that is a bonus again."

Fit in he certainly did.

Scotland are up next and, all going well, Farrell will be there in that 13 jersey again.