Ireland are 3 from 3 after a nerve-jangler in Dublin.

The entire nation fretted, in the first half, as Johnny Sexton missed three kicks at goal and Gareth Davies got over after a rare Welsh foray forward. It was looking bleak - a Jacob Stockdale try aside - until Bundee Aki bashed over for his second Test try and Sexton converted to leave it 15-13 at the break.

The second half started much better for Ireland as they scored early through Dan Leavy, following good work from Rob Kearney and Keith Earls on the right wing. Ireland had the try-scoring bonus point secured after 53 minutes, when Cian Healy got over but Wales hit back through Aaron Shingler tee up a grandstand finish.

Ireland looked home and hosed when Conor Murray landed a late penalty but Steff Evans shredded some nerves by scoring soon after the restart. And then Jacob Stockdale pounced to seal it with his eighth try in seven Tests. Some game!

END_OF_DOCUMENT_TOKEN_TO_BE_REPLACED

Lost out to Biggar on one aerial challenge and gave up a penalty for kicking the ball away [got done by the big screen replay there]. First half was not his finest 40 minutes but, pro that he is, he started the second half well and made a line break that eventually led to Leavy's score. Made a great counter with 10 minutes left on the clock. Just about clung onto George North's jersey soon after. Just about.

One sensational break in the first half that cut Wales to ribbons. Great support for Kearney after his break, ahead of that Leavy try. Relished the aerial battles and followed up with a great tackle on Steff Evans after one joust. Close with a chip, hack and chase that had Wales in a tizzy.

Will have enjoyed that early kick-chase and hit on Leigh Halfpenny. Made metres and got his team on the front-foot all afternoon with some big carries. Was constantly used for carries to punch holes and gain his team momentum and did not disappoint. Great hands too. The only time he lost the ball, Wales conceded a penalty for not releasing. Made a crucial Scott Williams tackle, late on.

Gave away an early penalty for offside after an Earls knock-on. School-boy stuff. Then conceded another for deliberately blocking and laying out Gareth Davies. Came back with a bang with a brutal, bashing carry for his try.

END_OF_DOCUMENT_TOKEN_TO_BE_REPLACED

Benefited from a gem of a Sexton pass to get over in the corner. Was out-foxed by Gareth Davies for his try but Ireland were left facing a four-on-two overlap for that. Made great metres up the left flank after a hospital pass from Leavy. Superb high take just before half-time. Sealed it with his second try.

Missed an early, easy penalty in front of the posts. Made up for it with a beauty of a flat, zippy pass for Stockdale's try.

Missed his next two kicks at goal but had some beautiful passes and kicks after that. Will have been thankful that he got two simple kicks in front of the posts as the first half ended. Came to the fore in the second half - in attack and defence - and set a fierce tempo for his team. Big tackles on Gareth Davies and Ross Moriarty.

END_OF_DOCUMENT_TOKEN_TO_BE_REPLACED

Teamed up well with O'Mahony to win his side a handy penalty. Superb juggling kept attack alive in the lead-up to Leavy's try. Landed a late penalty to get his team breathing space. The beating heart of this team.

Won his team an excellent penalty, early on, but Sexton missed a simple one. Powered over from close range for the bonus point try.

Alun Wyn Jones picked off a long Best lineout throw. As ever, good chats with the referee all match.

Solid enough game. Did well enough in the scrum, lifted well, made six tackles, missed none and nine carries that got minimal gains.

Levelled Ross Moriarty with a big tackle, early on. Did well to take two men away from the breakdown before Healy's try. 12 big carries.

Lineout beacon again and busy at the breakdown. Not used much for carries but tackled with gusto.

Won his side an early penalty with some strong lineout work. Did well to stay on his feet, and peel around tw Welsh men in their 22 just before one of Ireland's penalties.

Picked a fine time to open his try-scoring account for Ireland. Won his side a big penalty when they were 10-5 down and under pressure. Made one big carry that got his team flooding forward.

Ran over Ken Owens on one bullish charge with ball-in-hand. Carried and cleared out rucks like a man possessed. 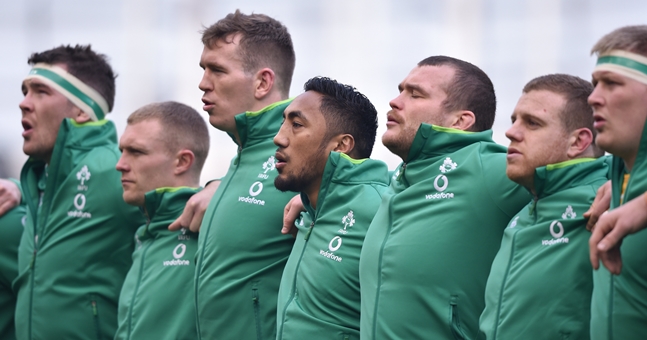 Knocked on badly with 10 minutes to go.


popular
The 14 Irish players Down Under as TG4 come up with the goods once again
Roy Keane's first impression of Cristiano Ronaldo proved to be very accurate
The SportsJOE 12 o'clock quiz | Day 290
Jurgen Klopp chases Sean Dyche down Anfield tunnel after half-time fracas
Joe Rogan reveals he could be parting ways with the UFC
"I kind of decided on Hill 16, 'you're either going to do this or you're not going to do this.'"
Fernando Torres has got absolutely jacked since retiring from football
You may also like
2 days ago
QUIZ: You'll need to be a massive Ireland fan to get all these one-cap wonders
1 week ago
"He's ruptured his hamstring off the bone and he’s trying to get up into the defensive line"
2 weeks ago
"I got the scan and it was literally broken in half" - Ciara Griffin on her first Ireland training session
1 month ago
"I don’t know what his problem is with me" - James Lowe on Liam Williams clash
1 month ago
James Lowe joins House of Rugby to talk Test debuts, Liam Williams and Chris Ashton
1 month ago
Brian O'Driscoll turns tables on South Africa after Ireland's World Cup draw
Next Page