Four changes Ireland must make for the second Test against Australia

Bundee Aki looked every bit like a player who had not seen competitive action in six weeks and many of his teammates were gassed by the final quarter.

Close and humid from the start, Ireland captain Peter O'Mahony was already wiping off beads of sweat as he left the dressing room and led his team to the pitch.

END_OF_DOCUMENT_TOKEN_TO_BE_REPLACED

Each player was escorted out to the crowd by a young mascot and John Ryan chatted amiably with his charge while most of his teammates looked steeled for combat. Ireland had obviously decided to Test Israel Folau with high balls but it was like pitching under-arm to Cardinals slugger Mark McGwire during the steroid years.

Time and again, and again, Folau made mince-meat of anyone that dared challenge him in the air. Rob Kearney tried gamely but it was Folau's over-head catch, at full tilt, in the final 15 minutes that stood out. Joe Schmidt remarked, post-match, that Jacob Stockdale would have needed as step-ladder to get close.

O'Mahony claimed, on Friday, that Australia had 'one of the best, if not the best, back row in the world'. With Caleb Timu making his Test debut, that call seemed a stretch but O'Mahony was probably referring to David Pocock and Michael Hooper alone.

Hooper and Pocock were star attractions at the 2015 World Cup, along with back row partner Scott Fardy, but we were denied their combined ferocity for 18 months after Pocock opted for a Test rugby sabbatical and a stint in Japan.

The Australian captain was excellent in the 18-9 win over Ireland but Pocock was on a whole other plane. The 30-year-old was a menace at the breakdown and played a spade-like hand in four of the 21 turnovers Ireland conceded. He was also part of a pack that improved as the game went on and ended up on top. To cap it all off, he powered over for the match-clinching try.

The flanker has been at this craic now for a decade and no-one has truly figured him out yet.

Looking ahead to the Second Test, here are some changes that Schmidt must be considering already. We'll start with some Pocock-proofing...

END_OF_DOCUMENT_TOKEN_TO_BE_REPLACED

Schmidt was surely going to change things up, win, lose or draw but he will be tempted to brush Plan A aside and go for his strongest possible side in Melbourne. James Ryan was immense again so it would be great to see another game wrung from his 21-year-old reserves and for him to be teamed up with either Devin Toner or, my choice, Tadhg Beirne.

And Dan Leavy can take the No.7 jersey back off Jordi Murphy. A star for Leinster and Ireland at the tail-end of the season, the flanker is a monster to equal Pocock at the breakdown.

Schmidt may also consider a back row of Beirne, Leavy and either CJ Stander or Jack Conan. Win the breakdown, you stand a great chance of winning the match. Ireland were second best in Brissy.

END_OF_DOCUMENT_TOKEN_TO_BE_REPLACED

Taste of the rarefied, Test air for Rob Herring and John Ryan [6 starts between them] but they will drop out next weekend.

Cian Healy, Sean Cronin and Tadhg Furlong will all start but, worryingly, they were all on-deck when Australia won that late scrum penalty to put them 11-9 ahead. Andrew Porter is another option for tighthead but Schmidt will turn to the Leinster lads as he simply has to.

Garry Ringrose back at 13

Bundee Aki last played a match on April 28 and it looked it against a revved up Wallabies side. The Connacht man was supposed to get a run-out for the Barbarians game against England but was pulled from the squad.

His match stats suggest he had a decent game - 19 carries for 42 metres gained and all seven tackles stuck - but he was an easy read for the Aussies. Normally used to bulling through opponents, he lost a few contacts and was hoovered up, and tread upon, and one ruck. Poor distribution and pass selection when Ireland stretched the Wallabies on a few occasions.

Robbie Henshaw looked equally rusty but should be shifted back to No.12 to accommodate the return of Garry Ringrose, who finished the season excellently for province and country. 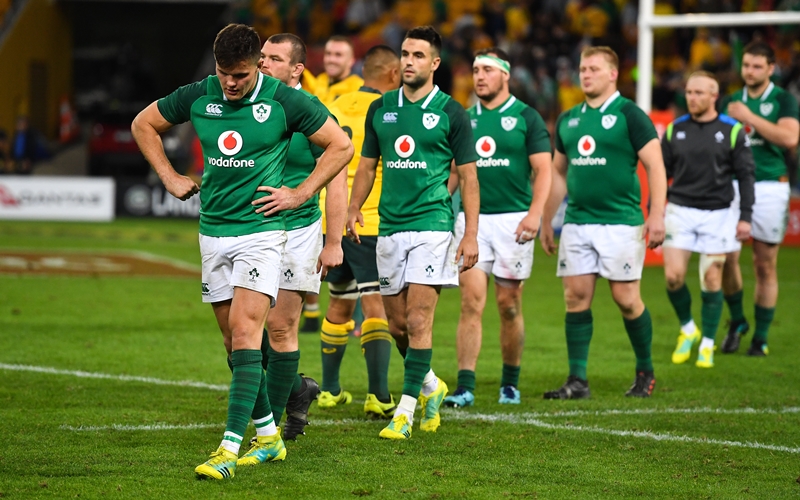 Joey Carbery showed promise in his first major start at No.10 but as long as Sexton is around, there will be a nagging sense of 'What if?' Of looking at the scoreboard and trying to gauge how it would look with Sexton at the helm.

Conor Murray took a lot of the responsibility away from Carbery but it would have been nice to see him make a big play, or call, every now and then. The moment Sexton came on, Ireland looked more dangerous in attack. He draws bodies to him like moths to an 80-watt bulb.

Wretched penalty aside - he should have found touch! - Sexton will be back at 10 and don't be surprised to find Murray beside him. John Cooney may have to wait.

In short, get the Leinster lads back in from the get-go!


popular
Spicy Donegal semi-final the highlight of a rip-roaring weekend of GAA on the tv
Shane Walsh: 'That's not how I was coached to play football. No one was coached to play football that way'
"Ah, come on!" - Richie Sadlier and Didi Hamann couldn't even agree to disagree on Griezmann's red
Seven exciting Ireland prospects pushing for November squad inclusion
"Where Johnny Sexton is so important to us now is being able to pass the baton"
Derry club win county final factfile games with extravagant set of jobs
Luiz Felipe in tears after bizarre red card after full-time whistle
You may also like
1 day ago
"I'd love to finish on home soil but I can't see it. I won't be playing in the next Six Nations"
1 day ago
Ireland star Will Connors on his rude awakening playing GAA in KIldare
2 days ago
Andy Farrell's Ireland squad for November internationals to feature some exciting talents
3 days ago
Picking Ireland's best back row as multiple candidates hit early form
4 days ago
Caoimhín Kelleher could carve out a career at Liverpool
1 week ago
Will Connors on what it's like to play under Johnny Sexton's fiery leadership
Next Page