Ireland have not won a Test match in Australia since 1979 and, after a brilliant Wallabies performance in Brisbane, the wait goes on.

Australia were deserved winners as Ireland gassed out in the final quarter and it was man-of-the-match Dabid Pocock to sink the dagger with a late try.

END_OF_DOCUMENT_TOKEN_TO_BE_REPLACED

The hosts hit the front after three minutes when Bernard Foley chipped over a close-range penalty. Joey Carbery levelled matters on 14 minutes and put Ireland 6-3 in front soon after.

The Wallabies were up for this one and Jacob Stockdale was needed to make a try-saving tackle, just before the half-hour mark. Home pressure told, though, and a missed Robbie Henshaw tackle proved crucial as Foley got over in the left-hand corner to make it 8-6. 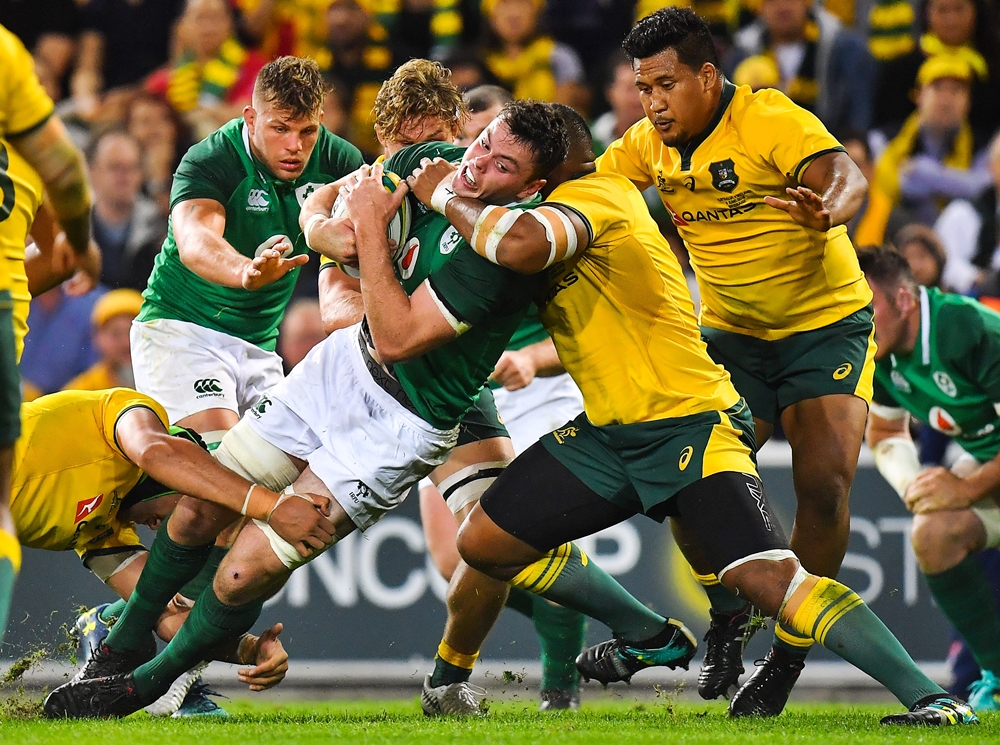 CJ Stander was so close to giving Ireland the perfect second half start but he was held up over the tryline and Carbery missed a eminently kickable penalty soon after. Ireland were coming hard but the Wallabies were committed in attack.

Carbery made amends in his final act of the game to put Ireland 9-8 in front. Joe Schmidt brought on the big guns - Cronin, Healy, Furlong, Sexton - but it was Australia that were denied as try when Israel Folau's score was chalked off for foul play by Adam Coleman.

But Australia were not to be denied as the heaved forward. A scrum penalty on an Irish put-in made it 11-9 and the stunning Pocock sealed victory with a try on the 72nd minute.

END_OF_DOCUMENT_TOKEN_TO_BE_REPLACED

Folau won that battle, hands down. Gave away an early penalty after a tackle on Israel Folau in the air. Made some nice incisions through the green and gold lines and unveiled a lovely banana kick in the first half. Made a couple of sloppy mistakes at the end of the first half. Reece Hodge ran through him like a revolving door in the final quarter.

Did really well to bring down Haylett-Petty after bouncing off Beale seconds earlier. Was nearly away but chipped into the midriff of the covering Wallabies defender. Went off with concussion after shipping a big hit.

END_OF_DOCUMENT_TOKEN_TO_BE_REPLACED

Superb turnover after he got into a firm jackal at the breakdown, early doors. Shot out of the defensive line twice in the first half and missed both tackles, the second of which led to Foley's try. Was stripped at the breakdown by Pocock, just after half-time. Made a big tackle on Beale as the hosts threatened to score in the final quarter. Showed up well in attack in those futile closing stages.

Pinged for an early offside penalty after Folau and Kearney contested a high ball. Willing runner who put his body on the line but was handled well, and neutralised, by the Wallabies.

Another that was roughed up by the Wallabies. Made a nice aerial claim before Coleman smashed him over the line. Denied a great try-scoring chance by a cruel bounce. Made a vital, try-saving tackle on Beale after 19 minutes. Not the only one outshone in the air by Folau but was harshly pinged for a late penalty. 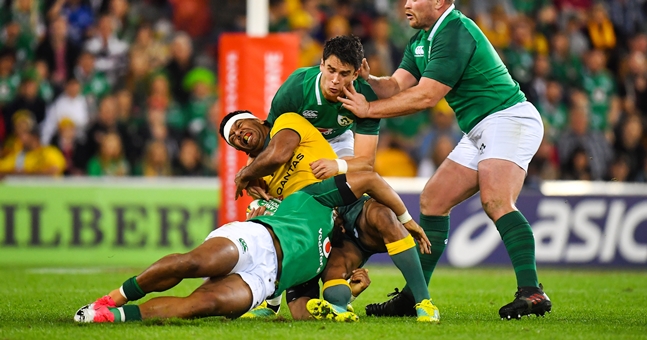 Got the treatment from the Aussies and was smashed to the deck by Michael Hooper. Kicked three penalties from four but it was left to Conor Murray to make most of the calls, and plays.

Came in for some hard hits from Marika Koroibete and Kurtley Beale in the opening 10 minutes. Made a great line break, on 57 minutes, but his kick through to the corner had too much on it. Lucky not to get into serious trouble for cursing at the referee, late on.

Scrum parity and showed up for some hard carries but did not have too large an impact and came off after 48 minutes.

Lineout was solid and made some decent carries but was guilty of tossing away a couple of offloads rather than hitting the deck and presenting well.

Solid if unspectacular. Made eight carries and stuck every tackle. Neither scrum was on top during his shift.

Forced a turnover with a sharp tackle on Genia off a Wallabies lineout. Coleman's off-the-ball tackle on him saved Ireland when Folau thought he had scored. Knocked on just before he was subbed off.

Smashed hooker Paenga-Amosa in the tackle then got the turnover and set off up-field. Made some highly effective carries. Another line break and Rambo roll to gain some extra metres, on the hour mark. Ireland's best player.

Excellent in the first half but faded after the break. Doing what he does best and, 90 seconds in, stole a lineout. Smart grubber behind the Aussie lines, a crucial turnover and made a line break in the opening 20.

Earned his team a turnover on his 22 after getting a strong position over the ball. Was outgunned by Pocock and Hooper at the breakdown, but not the only one.

Ireland's top carrier in terms of metres gained. Excellent line break just after half-time looked to be a certain score but he was held up over the line.

Did well after coming on early. Almost had a break-away after he read a pass out on his wing but he knocked on in the tackle. Good tackle on Foley, late on, but Pocock scored soon after.

Irish scrum conceded a costly penalty that saw Ireland fall 11-9 behind. Lovely carry and offload for Aki late on.

Some fine clearing out at the breakdown but part of that scrum that conceded that crucial penalty.

Failed to find touch after Coleman's tackle on Henderson saw a Wallabies try chalked off.

TMO had a close look at a neck roll and lift on Hooper that saw a costly penalty conceded.

Denied a late try after a knock-on a phase beforehand.


popular
Shane Walsh: 'That's not how I was coached to play football. No one was coached to play football that way'
Spicy Donegal semi-final the highlight of a rip-roaring weekend of GAA on the tv
Seven exciting Ireland prospects pushing for November squad inclusion
Allan Saint-Maximin pays tremendous, heartfelt tribute to Steve Bruce after sacking
"Ah, come on!" - Richie Sadlier and Didi Hamann couldn't even agree to disagree on Griezmann's red
Jordan Larmour primed for a season to remind everyone how good he is
Derry club win county final factfile games with extravagant set of jobs
You may also like
1 day ago
"I'd love to finish on home soil but I can't see it. I won't be playing in the next Six Nations"
2 days ago
Ireland star Will Connors on his rude awakening playing GAA in KIldare
2 days ago
Andy Farrell's Ireland squad for November internationals to feature some exciting talents
3 days ago
Picking Ireland's best back row as multiple candidates hit early form
4 days ago
Caoimhín Kelleher could carve out a career at Liverpool
1 week ago
Will Connors on what it's like to play under Johnny Sexton's fiery leadership
Next Page