Ian Madigan probably didn't expect he would be playing English Championship rugby in September 2017 when, in Spring 2016, he decided he would leave Leinster.

Earlier this year, Madigan made the switch from Bordeaux-Beglés to Bristol after a tough, injury-hampered season in France's Top 14. Moving from Leinster's ultra professional set-up to a, for want of a better word, laissez-faire environment in Bordeaux was hard but his enthusiasm for the game has not dampened.

END_OF_DOCUMENT_TOKEN_TO_BE_REPLACED

Handily for the 28-year-old, that enthusiasm will be matched by his new head coach at Bristol. Pat Lam was the driving force behind Connacht's transformation from whipping boys to PRO12 champions and his departure to England was a sore point.

Madigan was hoping he would be joining an Aviva Premiership club but Worcester Warriors' pipped them to safety and 2017/18 will be all about getting back to the big league. Having Lam at the helm has already boosted confidence in the club and the Dubliner told The Hard Yards just how focused the Auckland native is.

The steady stream of motivational messages, ideas, shared stories and declarations on Madigan's Bristol Rugby WhatsApp group are a clear sign of that. Many players, amateur or professional, will empathise with Madigan on this. He says:

"I don't know how much these guys sleep but Pat seems to be up at 5 or 6 o'clock every morning yet he's sending out WhatsApps at 11 o'clock at night. It just reminded me of Joe Schmidt's incredible work ethic.

"He's very consistent. Let's say someone drops a pass - Joe would say 'Oh, good players take those'. Setting early in defence is another one. After three or four months of training, if that slipped some coaches might let it go. But with Pat and Joe, they will say it every single time, regardless of who the player is. That instils a good culture and good habits in a team." 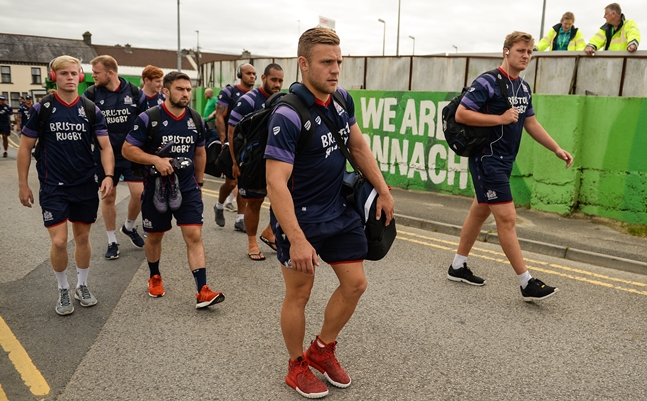 Having been a keen student of Schmidt, for Leinster and Ireland, Madigan recognises a similar drive and tactical awareness in Lam. He says:

"Pat's attention to detail is incredible. We use the [airborne] drone in training. Pat must watch the training footage at least 30 times because it seems as if he is man-marking everyone and [seeing] which guys are working hard and which guys aren't. Who's out of position. Who's getting off the ground quickly.

"I remember when Joe came in, the video analysis guys were worked off their feet because Joe wanted to measure so many different things for every player. Pat is no different."

END_OF_DOCUMENT_TOKEN_TO_BE_REPLACED

Madigan will be desperate to help Bristol return to the top flight but he is not writing off his chances of featuring for Schmidt's Ireland this season. Far from it.

"I'll just focus on myself and making sure I play as well as I can play so I can be an option for Joe over here," he said. "I'm not going to be worrying about what other lads are doing. It's just going to be about myself getting in the best shape and finding form as best I can."


popular
The FootballJOE Pub Quiz: Week 11
O'Hora and Keegan hammer into each other, both of them only revelling in it
Man United's tactical issues summed up in six shocking screenshots
Liverpool's half-time words in Old Trafford dressing room will please fans greatly
Jesse Lingard seeks to clear up what United fan shouted when he was warming up
Manchester United players 'lose faith' in Solskjaer after Liverpool pasting
Paul Scholes rips into Pogba after disgraceful performance vs Liverpool
You may also like
3 weeks ago
If you're looking for affordable health cover and 24/7 access to medical pros, this could be just the thing...
3 months ago
Forget counting your steps, this is the key metric you should be tracking instead
4 months ago
Football fans are going to love these brand new Cadbury chocolate bars
4 months ago
4 simple ways you can vastly improve the quality of your sleep
4 months ago
Calling all sports fans! This week's Powerball Super Jackpot is €369 million*, here's how to place your bet
5 months ago
The next generation of fitness trackers is here and it's an absolute game-changer for your health
Next Page