"I remember pushing the doctor away and thinking, ''Why is he dragging me to the touchline? Is he not on our team?!'" - Andrew Trimble

Andrew Trimble laughs when I refer to it as 'The Jared Payne red card game'.

We are talking about the 2014 Champions Cup quarter final between Ulster and Saracens but it is a game that was defined by Payne's red card in the fourth minute. "Jared hates that," says Trimble, "but it's how everyone remembers that game."

Payne was given a straight red when he collided with an airborne Alex Goode in the opening exchanges of the game at Kingspan Stadium. There was no malicious intent from Payne and it was a trial by one slow-motion replay after the other. Goode got to a Paddy Jackson high ball a split second before Payne who, arms outstretched, checked his momentum.

The Sarries fullback landed on his neck and each replay looked worse than the next. Ulster had won all six pool games to enter the quarters as top seeds but lost 17-15 and would go on to win the Champions Cup.

END_OF_DOCUMENT_TOKEN_TO_BE_REPLACED

Payne gone after four minutes, Rory Best limping off after 11 and Ruan Pienaar coming ashore with a shoulder injury after 50. It was a night when most teams would have let the game get away from themselves and curse at the injustice of it all. Ulster fought and scrapped and clung on with their fingernails.

Andrew Trimble last 64 minutes but it was a minute too long for most of our liking. Trimble, speaking at Sport Northern Ireland's concussion awareness launch during the week, offered a stark recollection of what he went through that night.

END_OF_DOCUMENT_TOKEN_TO_BE_REPLACED

The recently retired Ulster and Ireland winger read The Irish Times feature with Dominic Ryan. The former Leinster and Ireland flanker was forced to retire at 28 after suffering a spate of "terrifying" concussions.

What stood out to Trimble, from Ryan's interview with John O'Sullivan, was the forward sitting in the dressing room at half-time, with his head ringing, asking himself how in hell he is going to get through another 40 minutes of rugby.

"It was pretty frightening to read," says Trimble.

"There is so much pressure on players to get contracts. In the heat of the moment, it could often mean playing on through something bad even though you know you shouldn't be."

The 33-year-old, to his mind, was concussed three times in his professional career. "The first two were in the first season of my career (2005/06). I was split open twice. They were not talked about much. It was more a case of taking a bang in the head. Bad, but you didn't dwell on it."

END_OF_DOCUMENT_TOKEN_TO_BE_REPLACED

Concussion number three came nine years later against Saracens and occurred when Trimble tried to halt a rampaging Schalk Brits. 63 minutes were on the clock and Ulster were trailing 10-9 buy buoyed by another penalty miss from Owen Farrell.

"I got my head in the wrong area and Brits tore right into me," says Trimble. "It was a scary one."

The camera above reads 64:17 as it is a replay of the original collision that occurred with the clock at 63:18.

Scary for Trimble and scary for anyone else looking at the footage. He tries to rise but his body refuses. His eyes remain closed.

Play rages on and drifts over to the right wing. Ulster hold firm and Sarries spray the ball towards the left wing, back where Trimble is getting assessed by the medics.

Trimble is barely with it but he sees play coming his way - to his wing - and wants to get back in the line. He says:

"In the heat of the moment, you don't think rationally. I was pushing the doc.

"I remember cursing the doctor and pushing him away. I was thinking, 'Why is he doing this? Why is he dragging me to the touchline? Is he not on our team?!"

63:58 and Trimble wrestles free of the medics, who are trying to pull him away (see below), to get back and help his team. 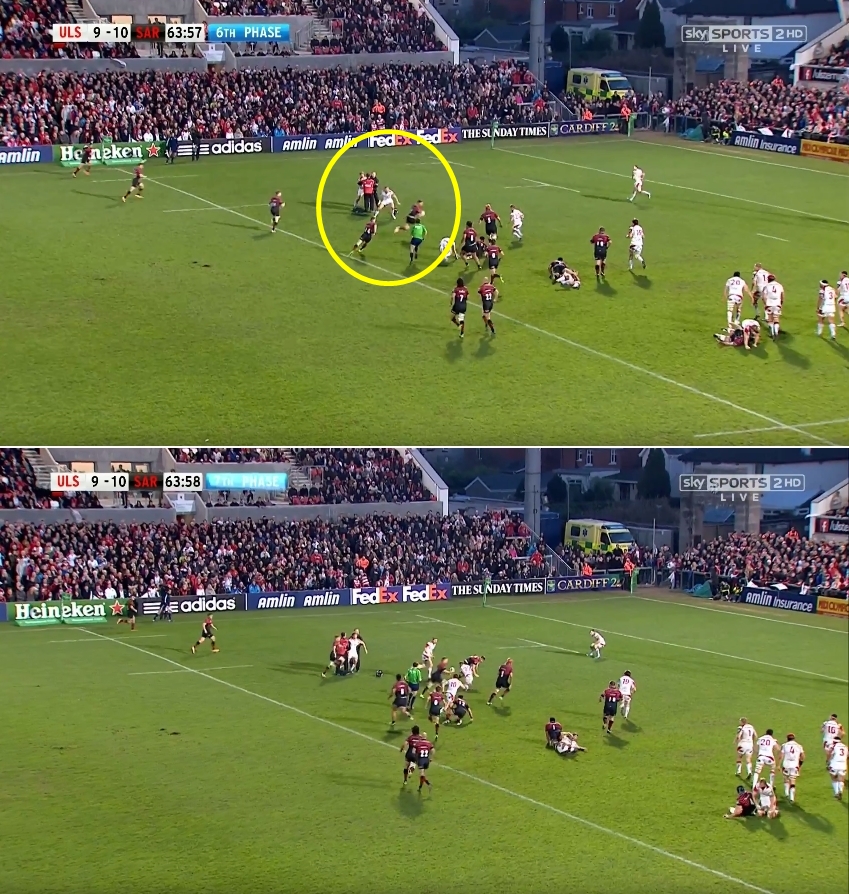 Tommy Bowe, Darren Cave and Iain Henderson are all needed to keep Chris Ashton from scoring his second try of the game. Saracens recycle and get the ball to Billy Vunipola, who passes to Brad Barritt on the charge.

It looks to be a certain score but, at 64:08, Trimble is back on the Ulster tryline and, with Cave over to help, they hold him up. Cave goes one further by turning the ball over and Ulster survive. 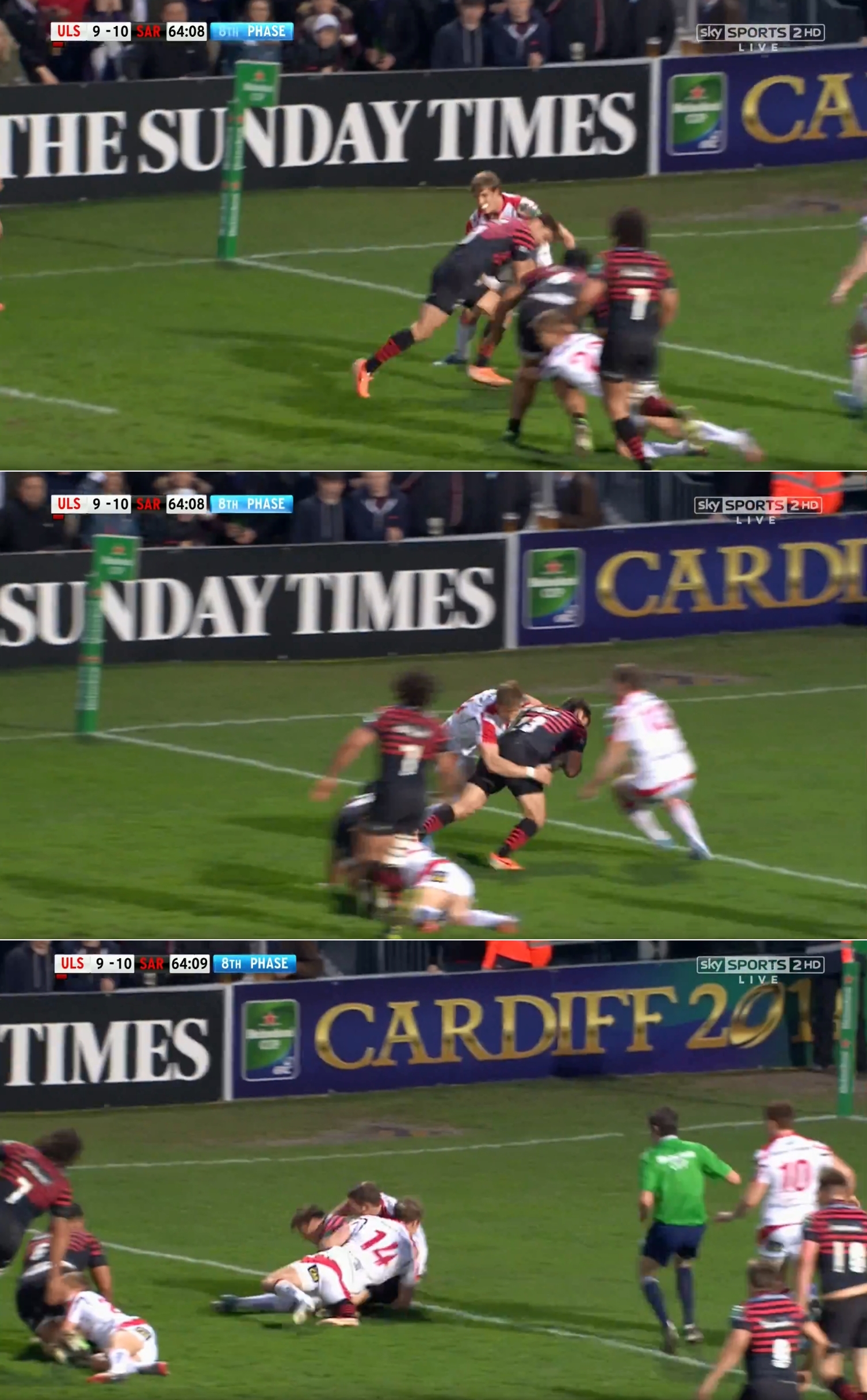 The Ulster faithful let out a roar and 13 men in white jerseys try to gulp air into their lungs ahead of the five-metre scrum. 16 minutes left but they are alive and can still win this.

Trimble is hauled off with more force and, this time, does not fight his helpers off. On Sky Sports, commentator Mark Robson declares:

"Well Ulster, they are selling their souls for the cause tonight."

It was heroic, it was magnificent and it still ended in defeat.

"Looking back," says Trimble, "the doctor did me a massive favour. That's what you need. You need people there who are willing to make the tough calls and to protect the player first.

"It shows how far we have come, though, from the start of my career. What was just considered a bad bang was, in the final years of my career, getting monitored properly and there were procedures and protocols in place. In the professional environment, I could always call on the doc if I had any questions or issues."

Trimble retired in May after 13 seasons with Ulster and, since hanging up his boots, has got involved in punditry with Premier Sports and in a tech solutions company garnered towards team sports. Asked to come along to the concussion awareness launch, he was happy to oblige.

A new online concussion resource has been launched, aimed at guiding users through the recognition and management of concussion, through to the gradual and safe return to work, study and sport.

"Sport NI is launching an app that is a useful tool to get information on concussion. That is to accompany their concussion info on the Sport NI website.

"What you want is for ourselves and our children to fully enjoy our sports without worrying about the knock-on effects. My sport has brought me so much fun, friendship and that feeling of being part of a team. You want to enjoy all the benefits and mitigate some of the risks."

For more on Sport NI's Concussion awareness drive, check out the website here.