'I hope my Dad is proud of me for what I did at the weekend' - Fergus McFadden on two very, very big hits

Fergus McFadden admits his memory of his two second-half minutes against Bath is spotty, at best.

The Leinster winger was having a quiet, solid afternoon's work, against Bath on Saturday last, at the Aviva Stadium. Then, within the space of 20 minutes - four minutes of on-field action and a half-time break - two huge collisions made it a day he cannot fully recall.

McFadden crumpled Bath fullback Anthony Watson with a well-timed tackle to the midriff that had the home fans out of their seats, cheering.

'It did get the crowd going and, I suppose, in a way we had a lot of momentum after that play,' he says. 'In a roundabout way, half-time came at a bad time as the lads had fed off that. We had a few good hits after that and we got them into touch.'

Two minutes after the break and McFadden's match was done. He cut inside, from the right wing, and was met, flush on the mouth, by Kyle Eastmond's shoulder. He lost consciousness as he collapsed to the ground.

He told us, 'Thankfully, I got up and was able to walk off the field and I came too in the next 15 minutes... I remember everything now, but directly after, the incident [was] something I was hazy on. I remember everything that happened now [and am] going through all the protocols and the guys are keeping care of me and making sure I tick all the boxes.'

McFadden continued, 'I was out cold on the pitch, so it was the worst one I have had. It's scary. I looked back at the footage when I got back to my house that night and said "Jeez, I didn't remember all of that."

'It is scary but you've got a lot of research in place now, medically and guys, because it is such a hot topic at the moment, concussion, it is watched very closely.

'I was texting Johnny after his game against Saracens, just saying hard luck and he wished me all the best on my return to play and he said if I had any issue to give him a call. Obviously he went through that stuff for three months and saw how careful they were with him, so you just can't be careful enough with the brain and the head.'

END_OF_DOCUMENT_TOKEN_TO_BE_REPLACED

Evidence - anecdotal and empirical - of the impact concussions has come to light in recent years through the accounts of rugby people such as Bernard Jackman, Dr Barry O'Driscoll, Shontayne Hape and Dr Michael Webb. To that end, big hits in rugby [see: Courtney Lawes on Jules Plisson] are not being lauded as much as in previous years.

McFadden was asked if he would ever let his son play rugby if such thundering collisions, from increasingly built-up players, continue to dominate the landscape. He commented:

'I think I would [like to see my children play rugby],' he declared. 'I love it and really enjoy it. Taking in that isolated tackle, it was great for the spectators and for the players. In fairness to Anthony Watson, he jumped up straight afterwards. He wasn't injured. It was just a good, honest tackle.

'Whereas, in the second-half, it was a bit innocuous; my head getting caught flush on his jaw. His shoulder, my jaw, going at that speed. Those things happen... you saw what happened to George North a few weeks ago and the knee on the head [when he was knocked out].'

McFadden added, 'It is scary at times, but all contact sports are. You go to a championship game at Croke Park and there are some massive collisions there, in football games. It would not stop me, if I did have kids, from having them playing the sport.' 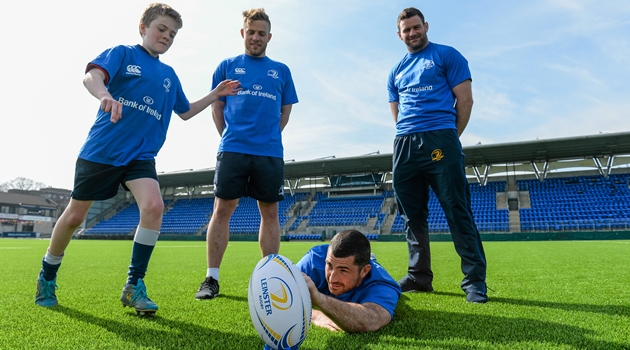 *McFadden helped launch the Bank of Ireland Leinster Rugby Summer Camps in Old Wesley R.F.C. The camps will take place in 22 locations all across the province this summer.  For more information log on to www.leinsterrugby.ie/camps.

popular
McGregor admits shout from Dustin Poirier's corner got inside his head
Dustin Poirier annihilates Conor McGregor to earn stunning UFC 257 victory
McGregor's first words to Poirier after defeat show where the damage was done
Dustin Poirier's reaction to win over Conor McGregor has fans labelling him 'perfect role model'
Khabib Nurmagomedov reacts to Conor McGregor's shock UFC 257 loss
Jolie Poirier certainly let her voice be heard after her husband's win over McGregor
Alex Ferguson takes Paul Pogba's agent to the cleaners with this rattling one-liner
You may also like
2 weeks ago
Leinster remind Ulster who's boss with impressive second half swagger
2 weeks ago
Story of teenage Ryan Baird in Leinster gym tells us an awful lot about his athleticism
3 weeks ago
Leinster without several senior stars for Connacht after positive Covid-19 tests confirmed
2 months ago
'He has that fiery edge' - James Lowe and his truce with Ireland's Munster crew
2 months ago
39 months later, one of the best rugby stories of the year happened in Glasgow
2 months ago
"There is no doubting Baird is a future Irish second row, long-term" - Paul O'Connell
Next Page