Rugby player suffers worst finger injury ever, bone pops out, he wants to play on

James Horwill is some tough mother.

The Australian second row is enjoying a northern hemisphere stint with Harlequins but he was in the absolute wars today.

The former Wallabies captain was attempting to get his team out of a 19-point hole, against Leicester Tigers, when he broke his index finger and broke it quite badly. 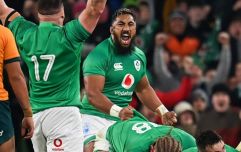 Bundee Aki reminded us all of his best qualities, on a night Ireland couldn't do without him

END_OF_DOCUMENT_TOKEN_TO_BE_REPLACED

The top of his finger was skewed at a horrendous right angle and there was a clear exposure of bone.

Typical of stubborn rugby forwards, Horwill asked the Harlequins physios if they could tape it up so he could play on.

The images of the break are right below so brace yourself.

Are you sick or something?

The Quins management saw sense and the lock was taken off with 10 minutes on the clock and replaced by hooker Matthew Shields.


popular
Gary Neville sticks up for Ronaldo as contextless pictures and videos taken as gospel
World Cup 2022 Day 18: All the major action and talking points
Rory McIlroy explains 'falling out' with Shane Lowry that lasted a few years
Brazil star responds after Roy Keane slates dancing celebrations
Cristiano Ronaldo's sister blasts Portugal boss' decision to start forward on the bench
Eniola Aluko responds to criticism after on-air mistake on ITV
Ballyhale's Colin Fennelly felt Ballygunner's victory speech was disrespectful
You may also like
2 weeks ago
World Cup 2022: All the major action and talking points from Day Three
2 weeks ago
Andy Farrell names final Ireland team of the year, with Wallabies bringing big guns
3 weeks ago
"It was a joy to watch" - Jamie Heaslip on his stand-out Ireland vs. Australia moments
3 weeks ago
The no-messing-about Ireland team Andy Farrell should start against Australia
1 month ago
All Blacks and Australia set to field combined XV against Lions in 2025
1 month ago
Australia become first World Cup team to criticise Qatar's human rights record
Next Page