The IRFU this afternoon confirmed the two glamour Tests for next November's Guinness Series, with Joe Schmidt's men taking on the World Cup finalists on consecutive Saturdays.

First it is the back-to-back World champions New Zealand rocking up at the Aviva. The All Blacks will be looking to extend their record of 28 Tests against Ireland without defeat when they take on their hosts on 19th November. 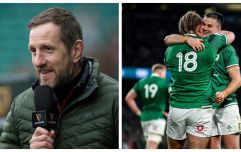 END_OF_DOCUMENT_TOKEN_TO_BE_REPLACED

Seven days later Michael Cheika's Wallabies will look to avenge their defeat at the same venue in 2014.

Ireland will play an as yet unnamed Tier Two nation on November 12th to limber up for the visit of our Antipodean overlords.

Peter Browne of the IRFU may be the only Irish man alive who describes the gut-wrenching last-gasp defeat to the All Blacks in 2013 as "incredible". Most of us have either blocked it from our memories or save our fruitiest expletives to describe it.

"We again have a very attractive Guinness Series to look forward to in 2016," said the chief executive.

"New Zealand return to Ireland for the first time since that incredible game in 2013 and Australia have shown that they are one of the most exciting and effective teams in world rugby after winning the Rugby Championship and finishing runner-up at this year's Rugby World Cup."

Maybe 2016 will be our time to take down the mighty All Blacks, but considering they won all but eight of the 80 matches they have played in this decade let's not hold our breath.