Guy Noves needs his team of novices and nearly-men to beat Ireland and do it in style. Welcome to life as coach of the French national team.

It was not always the way. France were imperious all the way up to 2010. Since then, drought has set in.

Les Bleus scraped to a 23-21 win over Italy last weekend and need to put Ireland away before they go on the road. Anything other than a win would puncture their fanciful title hopes.

END_OF_DOCUMENT_TOKEN_TO_BE_REPLACED

Looking to keep things fresh, Noves has drafted in six new players for the lot that often flattered to deceive against Italy.

However, the former Toulouse coach insists none of his players were dropped. He does not believe in the concept. In fact, he summed up Saturday's Test better than we ever could. Noves said:

"In my mind, there are no starting players or substitutes. In modern rugby, the term substitute is out of place.

"As a former track and field athlete, I compare this to a relay - The one who crosses the finish line is in all the pictures, but you can't forget the one who ran before him.

"No-one has been dropped. We are creating an atmosphere where everyone needs to be on their toes, and we want to see all the players that are part of this squad. If they don't get a chance, we'll never know what they are worth." 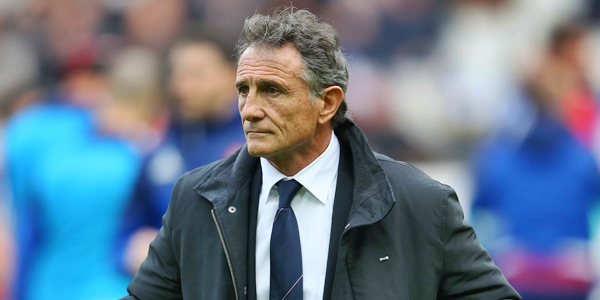 Noves was not revealing, either, who will be taking penalties and conversions [if any] tomorrow.

Jules Plisson was the unlikely hero against Italy but is down the pecking order for his club. Noves commented:

"They will go to Stade de France [later today] for a practice session, which they were not able to do last week.

"As usual, I will let the boys decide. If Jules is feeling good and want to keep kicking, he will. If Sébastien Bézy wants to take over, he will. We will accept their decision."


popular
Six GAA games shown on TV this weekend that you do not want to miss
Andy Moran reveals which former Mayo teammate was the ultimate team player
Paul Galvin is not one bit impressed with the new Kerry jersey
"It’s hard not to respect Johnny, even if you don’t like him!" - Dan Biggar
QUIZ: Which is the correct GAA crest?
Craig Dias on club All-Ireland run, winning Leinster, and making his second debut for Dublin a decade after his first
Ireland Under-17 defender Cathal Heffernan 'in talks' with AC Milan
You may also like
2 days ago
Ireland fitness update offers even more reason for Six Nations optimism
3 days ago
"I have to come into this camp and do what I can to get the No.2 jersey" - Rob Herring
3 days ago
"It's not a stepping stone any more" - Connacht pride in Test-ready stars
4 days ago
"I had a point to prove" - Conor Oliver on choosing Connacht over Leicester Tigers
1 week ago
"I saw a skinny boy from Ireland, standing in a big goal" - Jurgen Klopp praises Caoimhín Kelleher's development as a goalkeeper
1 week ago
Predicting Ireland's starting XV for Wales after Andy Farrell squad announcement
Next Page