This is the first time in the professional rugby era, Munster have started a league campaign with two defeats.

There is no sugarcoating it - and Graham Rowntree was not even trying, on Sunday - Munster were dreadful against Dragons.

Were it not for a two-try burst in the space of five minutes, Munster could have finished with a grim final scoreline. The two pre-season defeats to London Irish and Gloucester only matter now that Rowntree is now heading into his fifth game as head coach without experiencing that winning feeling.

END_OF_DOCUMENT_TOKEN_TO_BE_REPLACED

Have a look at the early United Rugby Championship table, this week, and you will see it book-ended by the Irish provinces. Ulster and Leinster, last season's two semi-finalists, are first and second, with respective points differences of +42 and +36. Down in the cellar, we find Munster (-13 points difference) and Connacht (-49).

It is early days, sure, but Munster have looked distinctly second best against Cardiff and Dragons - sides that finished 14th and 15th last season - and, after Zebre visit Cork this weekend, they have tough run of fixtures.

It does not get much tougher than that. Rowntree and his newly assembled coaching staff will fancy their chances at home, against all comers, but some big performances are needed. Looking and that unrelenting fixtures slate, one feels Munster needed a lot more than two points from their first two games. 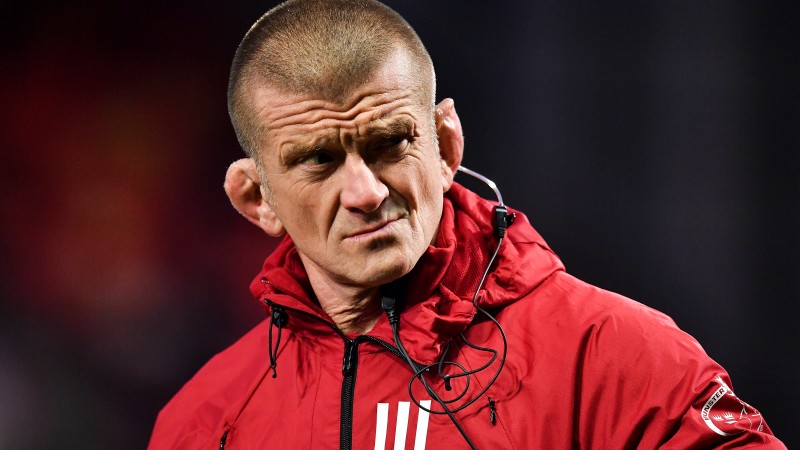 "I can't have this" - Graham Rowntree

Following the 23-17 loss to a Dragons side that seem to lurch from crisis to crisis, each season, Graham Rowntree pin-pointed a toothless attack as one of the most disconcerting parts of another tough afternoon. Post-match, Graham Rowntree told Steffan Thomas:

"I'm not happy. I told the lads I’m not happy with our discipline, inaccuracy, the way we were forcing things and our error count. I can’t have this. I was surprised about our inaccuracy particularly going into their 22, and our ability to keep the ball in that key area.

"I expected better in terms of the stuff we can do better," the Munster head coach added. "It was just so poor. We had eight turnovers in the first half and were ill-disciplined. We lost lineouts, knocked on and we never got a foothold in the game.

"We had to address that and be patient... in the second half we fell away in all those areas of the game, especially going into their 22. We were just sloppy."

END_OF_DOCUMENT_TOKEN_TO_BE_REPLACED

Those inaccuracies, poor ball-handling and decision-making were highlighted by former Munster lock Donncha O'Callaghan during his punditry shift, for the game, on RTE.

"Too many errors," he lamented. "we're all looking at the coaching ticket, but you can't get into that if the players put in that type of performance. Over 13 handling errors, breakdown again there was a problem, the set-piece was a mess.

"There comes a point as a player, you have to take responsibility for your job and your role. If you're carrying the ball into contact you look after it."

Up next are a Zebre side that picked up losing bonus points and try-scoring bonus points in two close, high-scoring defeats to Leinster and Sharks. Rowntree will have to do without the following players, too:

Captain Peter O'Mahony rolled his ankle but played on, albeit under duress, against Dragons while Jean Kleyn left the field for a Head Injury Assessment, in the first half, and did not return.

The southern province still have the likes of Joey Carbery, Craig Casey, Simon Zebo, Mike Haley, Tadhg Beirne and Malakai Fekitoa to call on, but they will need a lot of fringe and academy players to get them through the next two games.

We are not in must-win territory yet but Munster NEED a win in the next fortnight before that fixture list gets really cruel.


popular
Talksport presenter puts Martin O'Neill to the pin of his collar over Declan Rice and Jack Grealish
Roy Keane scores winning goal past Micah Richards in ITV v BBC pundits match
World Cup Power Rankings: The top eight pundits of the tournament so far
World Cup Power Rankings: The top 10 players at the tournament ahead of the quarter-finals
Gary Neville sticks up for Ronaldo as contextless pictures and videos taken as gospel
"There's no soccer, hurling, or rugby" - Kilcoo's secret to success
Ballyhale's Colin Fennelly felt Ballygunner's victory speech was disrespectful
You may also like
2 weeks ago
Alternative World Rugby Dream Team selected, with two extra Ireland stars
2 weeks ago
"Two Irish players are best in the world" - Rugby reacts to big Josh van der Flier and Terry Kennedy awards
2 weeks ago
Two baffling omissions as four Ireland stars make World Rugby 'Dream Team' of the Year
2 weeks ago
Josh van der Flier claims World Rugby Player of the Year at Monaco ceremony
2 weeks ago
"Highlight of my Ireland career" - Behind the scenes as Jack Crowley and Ross Byrne covered for a legend
2 weeks ago
Bundee Aki reminded us all of his best qualities, on a night Ireland couldn't do without him
Next Page