Gareth Davies had very high hopes for the Ireland game.

When the Ireland fixture was bearing down, Gareth Davies saw an opportunity.

The scrumhalf envisaged his Dragons running riot in the Lion's Den. Ideally, it would be annihilation, but his hope was for a big win.

Wales had torn Scotland asunder in their Six Nations opener but a 12-6 away defeat to England saw them lose ground on the leaders. To Davies' mind, his team could get back on title-winning track by pulling ut all the stops.

Ahead of the game, Wales coach Warren Gatland had rebuffed comments that Ireland were the championship's best side.

Davies went one further. We often hear players criticised for giving bland statements to the press but the Scarlets No.9 did no such thing.

"We are targeting a bonus-point win this weekend against Ireland so hopefully we can score some tries and come away with a good win. With players we have got I think we are more than capable of doing that." 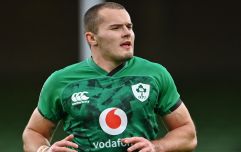 Jacob Stockdale back as Ireland squad for Scotland game announced

END_OF_DOCUMENT_TOKEN_TO_BE_REPLACED

After 30 minutes of action at Lansdowne Road, Davies and Wales were backing up the talk. They led a misfiring Ireland 13-5 and Davies had run in a try under the posts.

With Johnny Sexton finally landing a penalty, after 35 minutes, to make it 13-8, Davies was the first to approach him and have a chirp in his ear. Welsh confidence was high but Ireland upped the stakes with three tries in the space of 17 minutes, either side of half-time.

In the end, it was Ireland securing the try-scoring bonus point after only 53 minutes and running in a fifth try, for good measure, at the death.

As for Davies and Wales, they left with '0' points and with Gatland admitting a mid-table finish was the best they could hope for.

Credit to Davies for his pre-match honesty but one has to own such comments when the wheels come off.

popular
Roy Keane cheers all Celtic fans with response to Rangers title win
Micah Richards walks right into Roy Keane's trap as he attempts to defend Sergio Reguilón
The SportsJOE 12 o'clock quiz | Day 313
Jacob Stockdale back as Ireland squad for Scotland game announced
Longford leaving cert schools Europe's finest with measured masterclass
Conor McGregor bought out of Proper 12 whiskey company
The SportsJOE 12 o'clock quiz | Day 312
You may also like
5 days ago
Scrapping with teammates on Test week and how to put issues aside
6 days ago
"There would be a boot in the sink, a dish there, a toothbrush under the bed!"
6 days ago
Ugo Monye's Lions XV features two Ireland players and Welsh captain
6 days ago
Strong Ireland team Andy Farrell should pick to turn over Scotland
1 week ago
Welsh star backs Ringrose and Henshaw for Lions backline
1 week ago
Full text of Craig Casey's interview after lively Ireland debut, and initiation song
Next Page