Ireland fly-half and 2018 World Rugby Player of the Year Johnny Sexton has been excluded from the SportsJOE world team of the year.

New Zealand counterpart Beauden Barrett was ultimately preferred to the Leinster out-half with over 175,000 votes cast on the RugbyJOE Instagram page.

Cian Healy, Tadhg Furlong, Peter O'Mahony and Conor Murray were the only Irish players to make the side with Ireland trailing New Zealand (6) for the most selections. 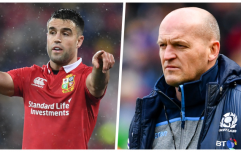 END_OF_DOCUMENT_TOKEN_TO_BE_REPLACED

Despite his omission above, Sexton has still enjoyed a phenomenal year winning Six Nations and Grand Slam titles with Ireland, as well as PRO14 and Heineken Champions Cup honours with Leinster, but he admits that Ireland will now have to grow accustomed to being tagged as favourites in the future.

“It’s been an incredible year for Irish rugby, to win everything we could, really,” Sexton said at the World Rugby awards ceremony in Monte-Carlo last month.

“It’s been very special, and a few of us have ended up here tonight. There are areas we’ve definitely highlighted to improve, which will be important in a World Cup year.

“Teams try to peak for World Cup years. People ask have we peaked too soon? Well we haven’t peaked, so we’re just getting better and hopefully we can continue to do that.

“You have to improve ahead of the general curve. We know everyone else is going to get better.

“We’ll be going into a lot of games now as favourites after what’s happened this year, so that will be a challenge for us. We’ve got to deal with being favourites and I’m sure we can do that.”


popular
Rory O'Connor gets Wexford out of jail as Shanagher throws it back
Alisson gives moving post-match interview after scoring late winner for Liverpool
Conor McGregor sends message to new UFC lightweight champion
QUIZ: Can you name these La Liga cult heroes?
'Stop, stop, STOP!' - Texas crowd left stunned as UFC legend has arm snapped
Burnley report Leeds' Ezgjan Alioski over gesture made towards Dwight McNeil
The SportsJOE 12 o'clock quiz | Day 352
You may also like
2 weeks ago
Major backing for Conor Murray-Finn Russell Lions partnership
1 month ago
'One man who has booked his Lions place is Conor Murray'
2 months ago
Conor Murray's injury scare and how it could have altered Irish rugby history
3 months ago
"There was no need to apologise. It was pure bad luck" - Conor Murray
5 months ago
England stars defend Conor Murray's Team of the Decade selection
5 months ago
"That was a different regime" - An inside line on big changes within the Ireland camp
Next Page