CJ Stander has been a revelation since he broke into the Munster first team in 2013 and he's made the step-up to international level look easy.

The 26-year-old won the man-of-the-match (as per usual) in the demolition of Italy in the Six Nations on Saturday after scoring three tries and getting through a mountain of work. 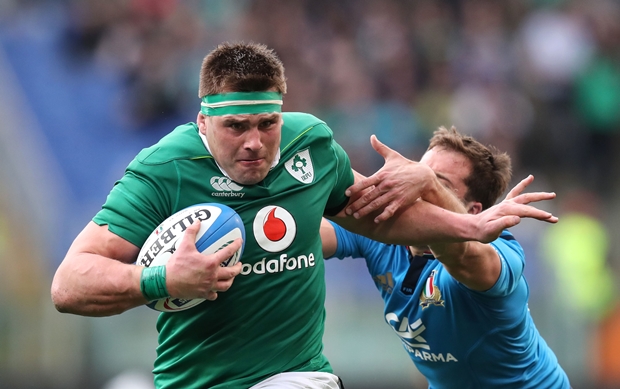 Speaking on SportsJOE's new rugby podcast, The Hard Yards, ex-Munster and Ireland player Donncha O'Callaghan explained how Anthony Foley - who passed away last year - impacted Stander's rise after his arrival in Ireland back in 2012.

"If I was to be completely honest, I think Munster was really good for CJ. I think Axel did an incredible job making him earn his stripes. If you look at his first season, he had to work very hard to get any game time and that kept him on a really short leash. I think that made him really hungry to push on so every time he got a chance, he knew he has to be brilliant.

"That's what he does now and he never takes the foot off the pedal because he's a guy that never wants to be complacent. He wants to improve and get better all the time. I do think that if he had come straight into the team and didn't have to fight, he mightn't have the sticking power that he has now within the national setup."

What is earned is valued.


popular
Rio Ferdinand recalls Roy Keane sparking out United youngster in training
Sean Cavanagh speaks nothing but sense about what GAA players should do in the gym
The SportsJOE 12 o'clock quiz | Day 309
Robbie Henshaw one of three Irish players deserving of Lions Test XV
Jamie Redknapp's face after going toe-to-toe with Roy Keane as Matt Doherty caught in the crossfire
"I feel it is important to provide people with some context surrounding this photo."
Referee Mathieu Raynal puts Sexton in his place after TMO mess
You may also like
2 years ago
Springboks legend Jean De Villiers on two jersey swaps he treasures most
2 years ago
Jean De Villiers on how Paul O'Connell put his foot in it during Springbok dressing room visit
2 years ago
Former Munster star Paul Warwick on the message from Galway that changed his life
2 years ago
John Cooney's summer work-out admission shows Irish rugby players have no real off-season
2 years ago
Credit due to John Cooney for honest words on playing 4 minutes during Australia tour
2 years ago
Australian match report mistake about Keith Earls is actually a huge compliment
Next Page