In-form Marmion out until February with ankle injury

He will be out of action until February.

Kieran Marmion's ankle has been nagging him for a while now and after playing through the pain barrier since October, he's finally set to have ankle surgery to try and heal the injury this week.

The surgery will keep him out for three months until February and in that period he's expected to miss a number of big games for Connacht, including the two over the next fortnight down in South Africa.

More annoying than that though for the scrum half is that he will also be sidelined for Connacht's next Challenge Cup game against Perpignan as well as the Christmas inter-provincial clashes between the Irish provinces. 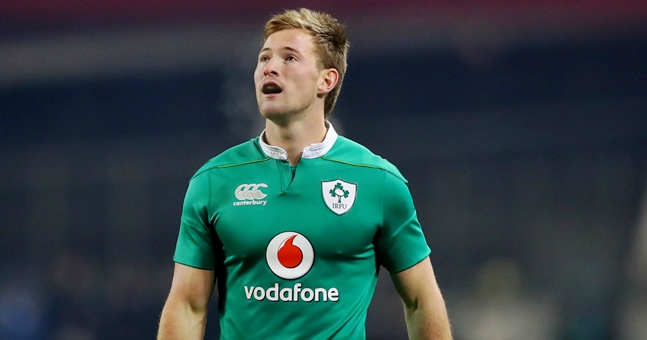 Marmion first went over on the ankle during Connacht's first win in Ulster in 58 years back in October and then it went on him again a fortnight ago during Ireland's win over Argentina in the Aviva Stadium.

He showed admirable toughness to put the pain of the injury to one side for the All Blacks game at the weekend and he turned in a stellar performance in green in his 58 minutes on the pitch in that historic win.

He was sharp to the rucks and his passing was pinpoint throughout and he left Ireland in a good position leaving when the scores were 16-6 coming up to the hour mark.

104 PASSES! @IrishRugby's Kieran Marmion led the way at the weekend for most complete passes as he was central to their win over New Zealand!

Find out who else is on the leader board: https://t.co/A1oFEyKD1Y pic.twitter.com/OcTpz86D01

He'll be a massive loss for Connacht for the foreseeable, though Caolin Blade has been in good form recently and he will fill the gap left.

The plan is for him to return in time for the Six Nations in February so hopefully that's the case.


popular
"If there's a stadium show happening in Europe, it's happening in Ireland"
Club footballer of the year steps up to win it for Corofin in the clutch
In defeat, Jerry Kelly dies with his boots on in coming of age final display
Shane Walsh provides one of the all-time great captain speeches as Tullaroan take a thriller
Conor McGregor makes surprise call-out after Cerrone destruction
Dana White livid with late stoppage on UFC 246 undercard
"I've never seen anything like it; he caught me way off guard" - Donald Cerrone on McGregor
You may also like
3 months ago
"He went missing for 80 minutes, we went into our shells" - Ferris cuts the shit
3 months ago
"I'd obviously let them down. It was definitely one of the worst times of my life"
3 months ago
Samoans plead for Aki's red to be cleared ahead of quarter final
3 months ago
"It's a terrible performance, let's call it what it is" - Eddie gets real
3 months ago
"Maybe you should keep it in-field and chase it" - Ireland go down with nothing left to give
3 months ago
Garry Ringrose's stats against Japan are downright frightening
Next Page