If Owen Farrell did what Faf de Klerk did, there would be all-out war

"You have to accept that decision,"

There was a pure, entertaining Faf de Klerk moment in the second half of South Africa A's win over the British & Irish Lions in Cape Town.

The host's No.9 had been sin-binned by referee Jaco Peyper for dangerous play, a few minutes before the first half ended. He started the second half in the bin but just as another flare-up occurred between both sets of forwards, there was de Klerk back in the mix - pushing, shoving and giving earfuls.

END_OF_DOCUMENT_TOKEN_TO_BE_REPLACED

Lions prop Kyle Sinckler took a moment to get his head around the scene himself as he beheld de Klerk and asked, "What are you doing here?"

That is the de Klerk that Sale and Springboks supporters love so much. He may only be a generous 5-foot-7, but de Klerk puts himself about. Over the course of this evening's game, he had run-ins with Tom Curry, Owen Farrell, Tadhg Beirne, and whoever else wanted it.

END_OF_DOCUMENT_TOKEN_TO_BE_REPLACED

That is all well and good - he is a player one can't but admire - but his reckless hit on Josh Navidi was practically begging for a red.

The only thing that saved de Klerk from being red carded was that he got his angles all wrong and copped the top of Navidi's head to the side of his own.

There were two staggering elements to this. The first was how Peyper and his Television Match Official both agreed that it was not a direct head shot. Peyper declared:

END_OF_DOCUMENT_TOKEN_TO_BE_REPLACED

Replays suggested otherwise but Peyper and the TMO talked themselves into de Klerk connecting with the shoulder of Wyn Jones and then the arm of Navidi. You can see from the replays that there is a glance with Jones' elbow but right at the same time as a head-on-head collision with Navidi.

The image below shows how de Klerk's shoulder makes contact with Jones' elbow then, a split second later, the heads collide. That contact with Jones is what saved de Klerk from a red, but there was a definite head clash. 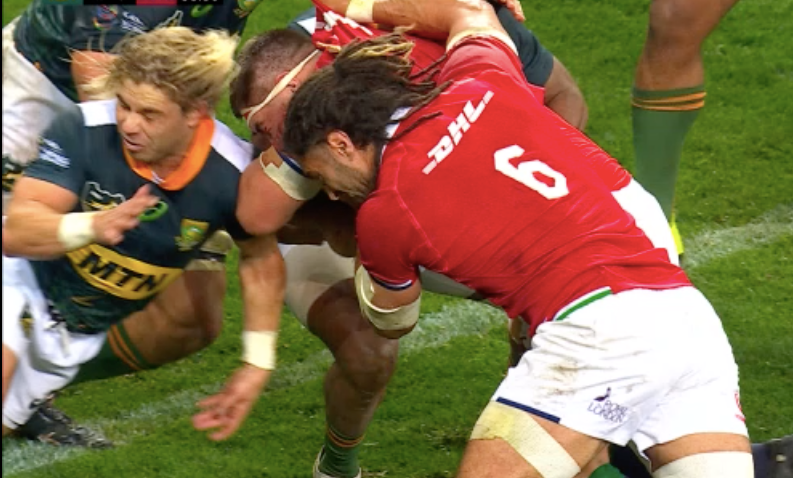 Absolutely zero attempt to wrap. Reckless on his own person and dangerous for Jones and Navidi. Post-match, Lions head coach Warren Gatland said:

"I definitely thought there was contact with the head with the Faf de Klerk one. The officials saw it differently and you’ve got to roll with that.

"They ended up with 13 men and gave away a huge number of penalties. I thought there was head contact but you have to accept that decision."

One could only imagine the uproar and international incident that would have been created had Owen Farrell tried a similar move to stop a Jasper Wiese or a Pieter Steph du Toit.

The second confounding part of that whole phase was that de Klerk did not leave the pitch for a Head Injury Assessment. Once Peyper and his TMO had agreed there had been no contact with the head(s), it may have been hard to then amble off for a H.I.A.

De Klerk is a tough as they come and he played 71 minutes for the 'A' side as they ran down the clock on a 17-13 win that will give the Springboks a real measure of confidence heading into the Test Series.

"We got from the Lions what we expected," said Springboks director of rugby Rassie Erasmus. "Their physical approach and slick handling were expected, and they did not disappoint.

"That is exactly what we needed with a week to go before the first Test. We wanted to win this match and I am sure they wanted to as well. Maybe those two tries not given would have counted for them, but it worked in our favour tonight."

Next up for the South Africans is a final hit-out against the Bulls, this weekend, before we get to the real stuff. It will be interesting to see if de Klerk will be cited for that dangerous play.

It would be a shame to lose him from any of the Tests but he got away with the sort of 'tackle' that World Rugby claim they want eradicated from the game.


popular
World Cup 2022 Day 12: All the major action and talking points
From Ireland to Argentina: Alexis Mac Allister's Irish roots explained
France demand FIFA change result of World Cup defeat over 'rule break'
The World Cup 2022 team of the tournament so far
Cristiano Ronaldo 'agrees £173m-a-year deal' with Saudi club
The FootballJOE Qatar World Cup 2022 Geography Quiz
World Cup 2022 Day 11: All the major action and talking points
You may also like
1 week ago
"Two Irish players are best in the world" - Rugby reacts to big Josh van der Flier and Terry Kennedy awards
1 week ago
Two baffling omissions as four Ireland stars make World Rugby 'Dream Team' of the Year
1 week ago
Josh van der Flier claims World Rugby Player of the Year at Monaco ceremony
1 week ago
"Highlight of my Ireland career" - Behind the scenes as Jack Crowley and Ross Byrne covered for a legend
1 week ago
Bundee Aki reminded us all of his best qualities, on a night Ireland couldn't do without him
1 week ago
Peter O'Mahony delivered some fitting Jack Crowley comments after surprise Test start
Next Page