It truly is a new era for England, with the focus very much on 2023 and the World Cup.

Eddie Jones has named four uncapped players in his 34-man England squad for the autumn internationals, but much of the focus will be on the players NOT included.

Nic Dolly and Tommy Freeman are called up for the first time while Jones has got Mark Atkinson and Raffi Quirke in for another look. That duo were both called into a short training camp, last month. 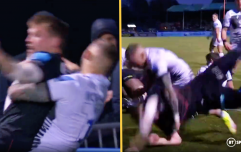 END_OF_DOCUMENT_TOKEN_TO_BE_REPLACED

Owen Farrell will captain England for the trio of November matches against Tonga, Australia and South Africa. The squad will head to Jersey on Monday, October 25 for a five-day training camp ahead of the Test matches.

Of the big England stars that have not made the cut, Billy Vunipola, Mako Vunipola, George Ford, Dan Robson, Jamie George and Danny Care will feature in many headlines and social media reactions.

Mako Vunipola and Jamie George were both in last summer's British & Irish Lions squad. Care and Ford have both been in great club form, respectively, with Harlequins and Leicester but Jones seems to have left them in his rear-view mirror.

"This is a young but very good, talented squad who have all earned their places. It is one of the most competitive squads I have ever picked,” said Jones.

"There are a number of disappointed players who haven’t been selected, but they know what they need to do and no door is closed to any player.

"We’re looking forward to three tough Test matches. Tonga always play a strong, physical game and Australia and South Africa have had extended periods together and will be a good challenge for us. Our aim each week will be to get better and better as we work towards the Rugby World Cup in 2023."