"People I had never met before are now really good friends."

Back in the summer of 2019, the DCU campus, in Whitehall, played host to The Union Cup. Oran Sweeney and the Emerald Warriors helped set the scene for Europe’s biggest LGBT+ inclusive rugby tournament.

The Derry native was a special guest on House of Rugby and he explained how he got involved with Emerald Warriors. He commented:

END_OF_DOCUMENT_TOKEN_TO_BE_REPLACED

"I wanted something to meet some friends, and some gay people, in a new city. Something to keep me fit while travelling home to play Gaelic for my home team. It has transformed from there."

Graham Flaherty was at that Union Cup, in 2019, and it was there the idea of getting involved in Emerald Warriors took hold. "I saw them, and the other teams, playing and thought I'd like to get back into rugby.

"I missed the open evening, soon after, but went along to one of their training sessions. Once I got talking to their players and coaches, they made my getting involved so easy and I was soon into the swing of it.

"All skill levels are catered for. There is a massive mix at the club - people that played rugby when they were younger, ones that have continued on through schools and other clubs and folks in their 20s and 30s with no rugby experience at all. We have two clubs in the Dublin Metro League and a tag rugby side, too.

"Some prefer playing tag and are happy there. Others get a taste for it then want to give contact rugby a go. And then you have the older players that have had enough of the contact but still want to play, so they try out tag." 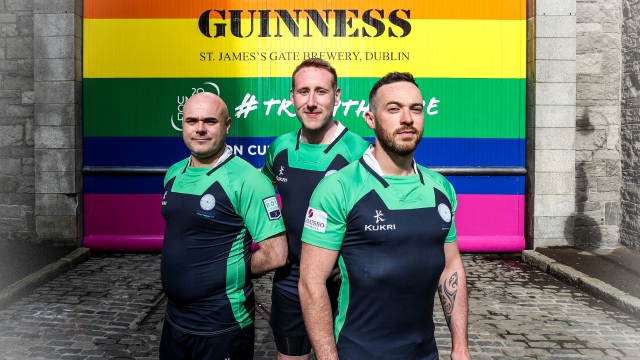 19 years, and counting, of Emerald Warriors

END_OF_DOCUMENT_TOKEN_TO_BE_REPLACED

The club was formed in 2003 so next year will see the Emerald Warriors turn 20. It will be a big anniversary year for the club with lots planned, including a trip to Birmingham to play The Union Cup.

Going on tour, now that the worst of the Covid pandemic is behind us, is back on the slate for Emerald Warriors. Earlier this year, they travelled to Ottawa, Canada for The Bingham Cup. The Warriors finished fifth and won the Bingham Plate, the club's best finish in the international, non-professional, gay rugby union tournament.

Flaherty says the club has a membership of more than 200 contact and non-contact members, along with pavilion members that do not play but help the club tick over and help out in any way they can.

"We are open to everyone on the LGBT+ community and we also have a lot of straight players that are big allies of us, and what we are doing. Anyone with a genuine interest in playing rugby, we want them to know they are more than welcome to come along and give it a go.

"One of the best aspects I've had from my experience with the club has been the fun and the friendships made. People I had never met before are now really good friends and it has expanded my social network considerably.

"There's a couple that met each other when they started playing together at the club, and who are now engaged."

The Emerald Warriors open evening will take place at their current grounds at The High School in Rathgar, from 7pm on Monday, October 3.

🟢 𝗢𝗽𝗲𝗻 𝗘𝘃𝗲𝗻𝗶𝗻𝗴 🟢
Join us on Monday 3rd October for our Autumn open evening. Open to anyone interested in joining the club as a contact rugby, tag rugby or pavilion / social member. Come down and meet some of our current players, members and coaches and find pic.twitter.com/mJmLLXKYJL

For more information on the evening, and the club, visit their site HERE.


popular
Talksport presenter puts Martin O'Neill to the pin of his collar over Declan Rice and Jack Grealish
Roy Keane scores winning goal past Micah Richards in ITV v BBC pundits match
Gary Neville sticks up for Ronaldo as contextless pictures and videos taken as gospel
World Cup Power Rankings: The top 10 players at the tournament ahead of the quarter-finals
World Cup Power Rankings: The top eight pundits of the tournament so far
Rory McIlroy explains 'falling out' with Shane Lowry that lasted a few years
"There's no soccer, hurling, or rugby" - Kilcoo's secret to success
You may also like
2 weeks ago
Alternative World Rugby Dream Team selected, with two extra Ireland stars
2 weeks ago
"Two Irish players are best in the world" - Rugby reacts to big Josh van der Flier and Terry Kennedy awards
2 weeks ago
Two baffling omissions as four Ireland stars make World Rugby 'Dream Team' of the Year
2 weeks ago
Josh van der Flier claims World Rugby Player of the Year at Monaco ceremony
2 weeks ago
"Highlight of my Ireland career" - Behind the scenes as Jack Crowley and Ross Byrne covered for a legend
2 weeks ago
Bundee Aki reminded us all of his best qualities, on a night Ireland couldn't do without him
Next Page