'It's not all rainbows and unicorns. We want to win!'

How exactly did a GAA-crazy lad from Derry end up captaining an Irish rugby team on the first ever occasion the country hosted an LGBT + inclusive tournament?

It is a sunny Sunday in Dublin and that is where Oran Sweeney steps in.

The Derry native was back home for a family wedding, on Saturday, but has shot down to Dublin to chat to Barry Murphy on Baz & Andrew's House of Rugby about the upcoming 'Union Cup Dublin' tournament.

Fittingly, given the event he is here to promote, the wedding Sweeney was at the day before was between his uncle and his partner. "My first gay wedding," he says.

The Union Cup first took place in 2005, in Montpellier, and featured seven LGBT (lesbian, gay, bisexual, transgender) and inclusive teams. It has grown each time, in scope and popularity, and will this year have 45 teams, and 1,500 players, competing for two cups at the DCU Campus on June 8 and 9.

Sweeney was only a teenager, playing Gaelic football for Steelstown (Brian Ógs), when the Union Cup was first contested. Now, 14 years on, he is leading the host nation's Emerald Warriors and hoping to keep the trophy on Irish soil.

The fullback spoke with Barry Murphy (from 43:30 below) about his involvement in Emerald Warriors and in raising as much noise as possible about the tournament. 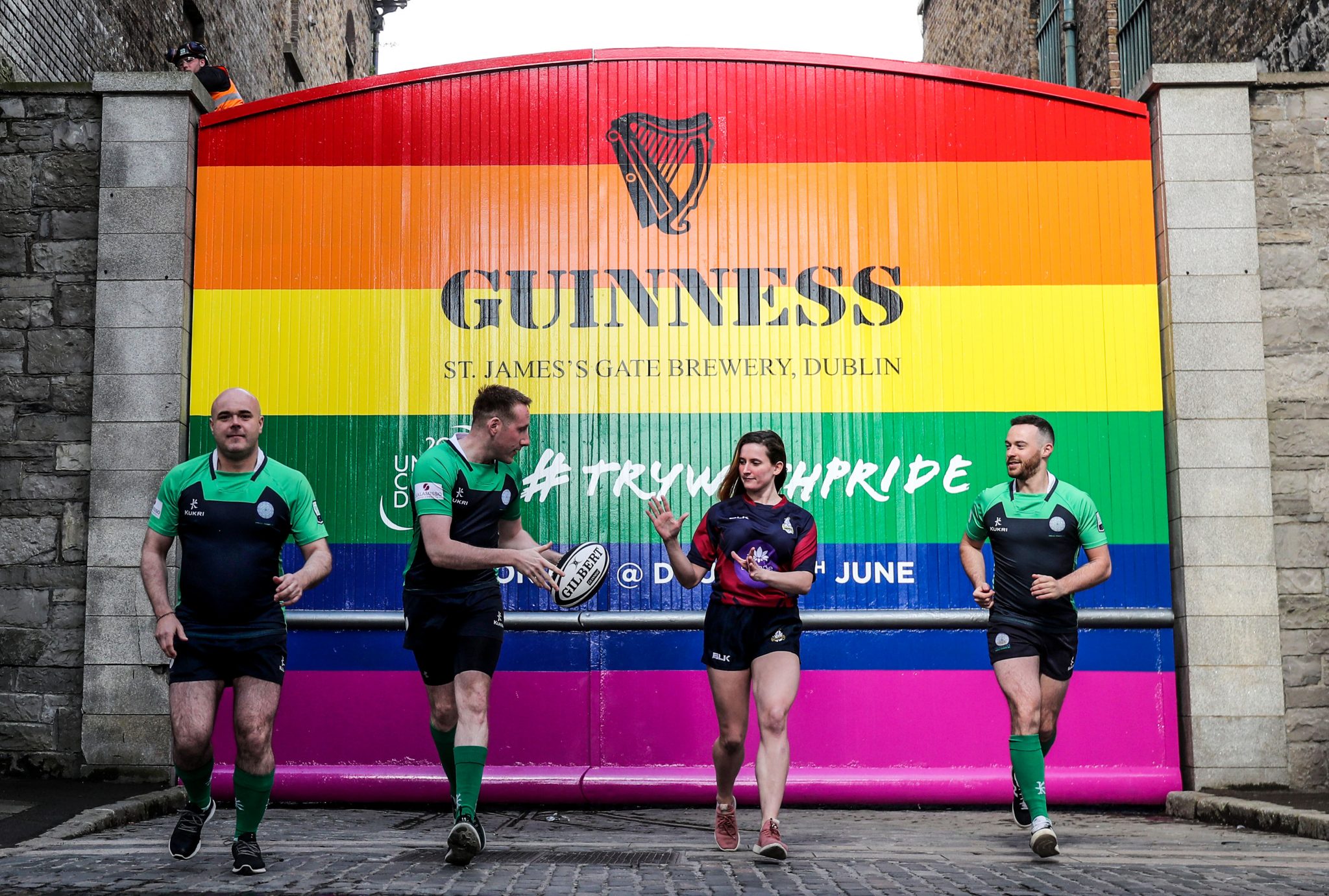 The Guinness Gates at Rainsford Street have been completely transformed for the first time in their history to promote the Union Cup - Europe’s biggest LGBT+ inclusive rugby tournament - which takes place on 8-9 June at DCU Campus (Credit: INPHO)

Sweeney played GAA from an early age and, even when he moved down to Dublin, he would often make 480km round-trips, on weekends, to get back home and line out for Steelstown.

"So," he says, "I wanted something to meet some friends, and some gay people, in a new city. Something to keep me fit while travelling home to play Gaelic for my home team. It has transformed from there."

He found a home with Emerald Warriors, who play in the Leinster Metro League, and a positional home at fullback (high ball fielding and kicking out of hand two skills that come in handy).

Four years on from Ireland passing the same-sex marriage referendum, Murphy noted that staging the Union Cup in Dublin was another way for the country to fly the flag and show its support for LGBT rights.

BARRY: Tickets are only 10 euro (for adults) and all the proceeds go to BeLonG To Youth Services. Nothing but positivity!

ORAN: It'll be a great event. It's not just a rugby event and it's not just for the rugby community. It's for everyone to come along. Our team is represented by around, from 25, 26 counties all over Ireland. So, all their family and all their friends will be coming along to join in and we're inviting yourselves, we're inviting everyone to come along and witness what inclusive rugby is about.

BARRY: It's positivity and stuff, but do you still want to go out and kill the opposition?!

ORAN: Of course, of course. I want to win.

BARRY: It's not all rainbows.

ORAN: It's not all rainbows and unicorns. We want to win! Yeah, we want to win the rugby.

Oran Sweeney and his Emerald Warriors teammates will extend the warmest of welcomes on June 7, at the opening ceremony, but will get to the serious business of winning the competition on the Saturday and Sunday.

As part of their drive to encourage people to attend the Union Cup matches, at the DCU campus on June 8 and 9, Guinness completely transformed their famous gates 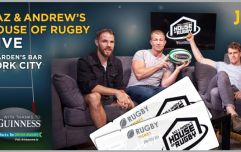 House of Rugby is coming to Cork, and you can come join us

END_OF_DOCUMENT_TOKEN_TO_BE_REPLACED

The Guinness Union Cup gates, unveiled to the world on Tuesday, took nine days to complete and were revealed by representatives of the Emerald Warriors, including, Sweeney, John Noone, Megan Fogarty and club president Richie Fagan.

This is the first time the Guinness Gates have been any colour other than black or blue (with gold lettering). In the early 20th century, the gates would have been painted bright blue but, in 1988, this changed to black with gold lettering. Richie Fagan commented:

"We are honoured to have a global brand such as Guinness stand in support of inclusive rugby, and to see the iconic gates painted in celebration of 'Union Cup Dublin’ is epic. It is so important for us that our partners like Guinness make this tournament possible, and we’re incredibly proud to showcase how Ireland does it to our 45 visiting teams."

"We invite Irish people," he added, "not just rugby fans, to do the same and come out to support and enjoy the Union Cup at DCU over the weekend.”

CHECK OUT THE FULL ORAN SWEENEY INTERVIEW FROM 45:20


popular
Conor McGregor demands apology from ESPN pundit over Cerrone comments
Kerry vs. Dublin ends in meleé, and a draw
Two giants rise above the fray
Wexford trailblazers go down but father and son show why club GAA is best
David Clifford leaves Dublin for dead to score sublime goal
Ante-post Cheltenham chances to get stuck into before it's too late
Charlton want Troy Parrott on loan until end of the season
You may also like
5 days ago
Saracens players reportedly lined up for Irish loan moves
6 days ago
Baz & Andrew's House of Rugby - Saracens shockwaves
1 week ago
The only man who can stop Liverpool is back to haunt them
1 week ago
Baz & Andrew's House of Rugby - Munster on the ropes
1 week ago
Not a single Munster player is guaranteed of starting for Ireland
2 weeks ago
"I've got fans saying we don't care and I'm like, 'What the **** are you on about?'"
Next Page