Having come into professional rugby by the lesser tread path - growing up in a working class family in Bristol's Knowle West estate - Ellis Genge takes nothing for granted. Not his big 2016 switch from Bristol to Leicester Tigers, not his (to date) 12 England caps and not the interest he has recently garnered for his open and honest interviews.

The 24-year-old loosehead made his Bristol debut six years ago and had only made one Leicester start when, in May 2016, he won his England debut against Wales. A young man, in many ways and considerations, Genge has already wracked up over 100 games in professional rugby.

With England appearances comes added attention and Genge has not blanched at the prospect. In a sport where so many interviews can be safe and anodyne, the prop has made a name for himself - much like James Haskell and Joe Marler before him - with his forthright views and with an engaging personality.

Genge admits that he was "short-sighted" growing up and would be drawn towards confrontation too easily. "In the moment, I'd lose my shit," he confessed on the latest episode of House of Rugby UK. "It happens now and again, to this day, but not as bad. I used to throw my toys out of the coat, a lot. I went through a lot of wardrobes, just ripping shit apart... I didn't have a wardrobe for a long time; all my clothes were on the floor. All my furniture was taken out of my room for a while."

Trying to distill down why he had such anger issues, when he was growing up, is not simple. He suffers from dyspraxia - a condition that, in young people, can lead to difficulties in school - and this was not helped by an unsettled home life. Several of his relatives, on his mother's side of the family, have 'been in prison, for a long time' and it was a path he was heading down - getting arrested a couple of times during a three-month period in his late teens - before he opted to get away from Bristol and embrace a new lifestyle at Leicester. 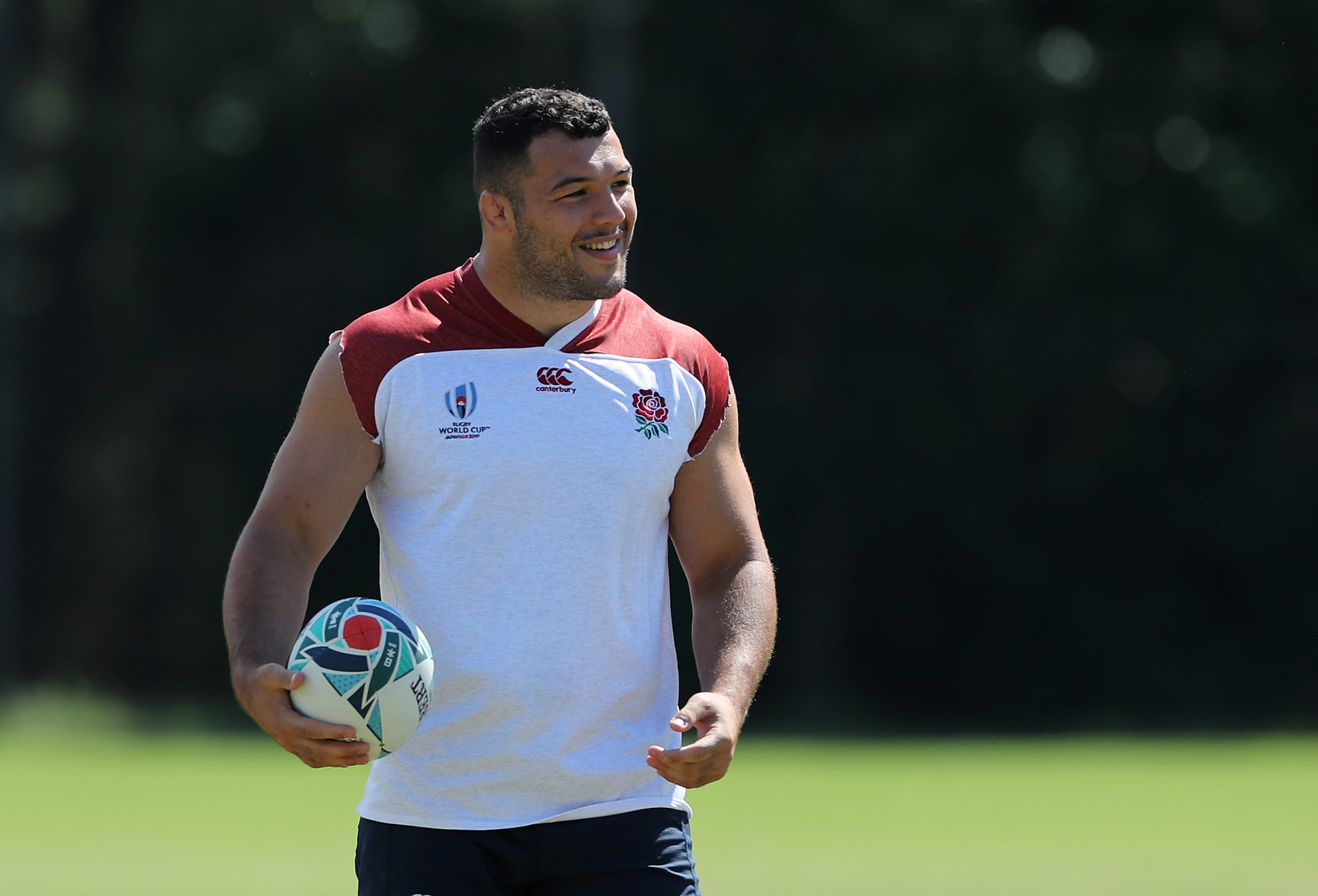 Genge is proud that his rugby career has afforded him the opportunity to lend financial support to his family. They are fully behind him, he says, but it is his friends that have had a profound impact on him. He has been sent to therapy and tried if off his own bat, too, but he credits his close friends from pulling him through his worst slumps.

"Although I help some of my friends out every now and then, they're very happy for me... like, when I was trying to come back to Bristol as hard as I could, they were like, 'Nah mate, there's nothing here. Nothing's changed, you know what I mean? It's still Knowle. You're not missing anything'... It's a testament to them that they keep reminding me that I ain't missing out on anything."

He speaks about Jed, a good friend of his, who is a road-worker back home. Jed is 'diligent, hard-working' and good at his job but Genge still looks at his friend and thinks, 'This could have been me'. "It ain't a bad job," he says, "and Jed earns a good whack, but I'm doing something that I'm very privileged to do and I've met brilliant people, had good experiences, I've gone abroad a lot more than I would have."

END_OF_DOCUMENT_TOKEN_TO_BE_REPLACED

Genge's first England tour was over to Australia in 2016 and his first two Test starts were on the tour to Argentina the following summer. He made Eddie Jones' 31-man World Cup squad but the return of Marler, who deputised for Mako Vunipola, limited his tournament appearances to run-outs in group stage wins over Tonga and the USA.

He returned to England and rejoined a Leicester Tigers team, under Geordan Murphy, that would have been rock bottom in the Premiership were it not for Saracens' salary cap points deduction. At present, Tigers (second bottom) are on 11 points and 18 clear of Saracens, who are still on minus points despite winning six from eight games. 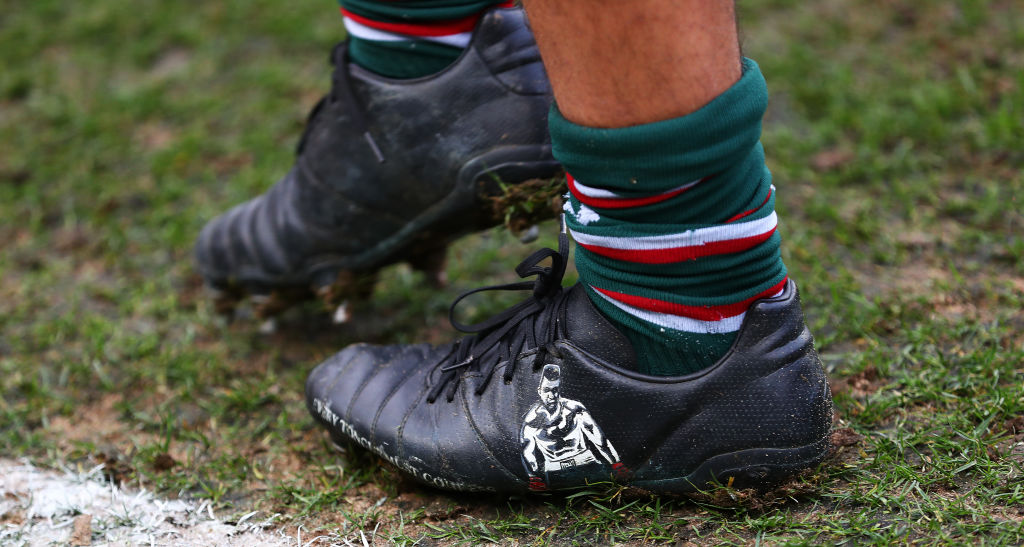 A close up of Ellis Genge's boots with a 'Muhammad Ali' logo pictured on them during the Gallagher Premiership Rugby match between Leicester Tigers and Bristol Bears in January, 2020. (Photo by Matthew Lewis/Getty Images)

Tigers had a much-needed Premiership victory over Bristol Bears, his old club, over the festive period and it lifted a pall over the storied club. Genge is hoping that Leicester can kick on from there and climb the table, but the criticism he and his teammates have received from some fans over the past 12 to 18 months has clearly stung.

"You give an arm and a leg for rugby... and that's what I say to people when I get fans peppering me at Leicester... I've literally got fans saying that we don't care and I'm like, 'What the f*** are you on about?'

"I got up here [to Leicester] at seven o'clock for seven months to go in and do rehab then wait three hours to do weights - so that all the boys that were playing could go in and use them. You're sat there, you're twiddling your thumbs; you're losing your mind. Everything that you give psychologically and all the body parts that go missing... everyone seems to forget that as soon as you've finished playing.

"People say, 'Ahh, he jumped ship when times got tough'. You've got to look after yourself and that's an instinct."

"It's bollocks to think that just because you've been somewhere for ten years, that you're going to get looked after."@EllisGenge and @jameshaskell discuss the issues with loyalty in rugby, from both clubs and players. pic.twitter.com/Fxx6hHYO7Z

END_OF_DOCUMENT_TOKEN_TO_BE_REPLACED

As much as he talks about looking out for number one, and recognising that rugby is a cut-throat business, Genge and Leicester teammate George Ford have both shown their faith in the club - and their ability to ride the current storm - by signing new deals.

Ellis Genge is also giving back to what he hopes will be the next generation of rugby players coming through. He works closely with HITZ, the Premiership education and employability programme that annually works with promising teenagers across England.

Rugby will never compete with football for its' universal appeal, but Genge is also encouraged by the RFU trying to reach out to more working class communities, like the one he grew up in, and find the game's next talents away from that well-beaten public school track.

The full Ellis Genge interview is below and is well worth a listen. It has a level of frankness that Irish rugby supporters may not be too accustomed to. Ronan O'Gara in full flow or Keith Earls at his most honest are the only two Irish players that come close to laying it all on the line like the England star does here.

WATCH THE FULL HOUSE OF RUGBY INTERVIEW WITH ELLIS GENGE:

On the latest episode of House of Rugby, Alex Payne and James Haskell are joined by England and Leicester Tigers prop Ellis Genge.