"Are you joking?! They would not come out and pass with me if their lives depended on it!"

Dorothy Wall may come from a big rugby family, down in Tipperary, but she was often hard pressed to find someone to kick about with once she started to give the sport a serious go.

Wall's three brothers all play rugby but operate in the backline, whereas she is a combative back-row that "specialises in the toe-poke".

The Munster and Ireland star is one of the bright new hopes for her province and country, but she almost passed on playing the game she now excels in.

"My three brothers would have played down in Fethard, and my dad would have coached them," she says. "We'd be a very rugby-oriented family. My mum and I would have rode horses as well.

"During Transition Year, though, Polly Murphy down at the club was like, 'Will you give the rugby a go?'

On the latest House of Rugby Ireland episode [LISTEN from 51:00 below], Dorothy Wall shared the story of her rapid rise with host - and Ireland teammate - Eimear Considine, and fellow young gun Beibhinn Parsons. 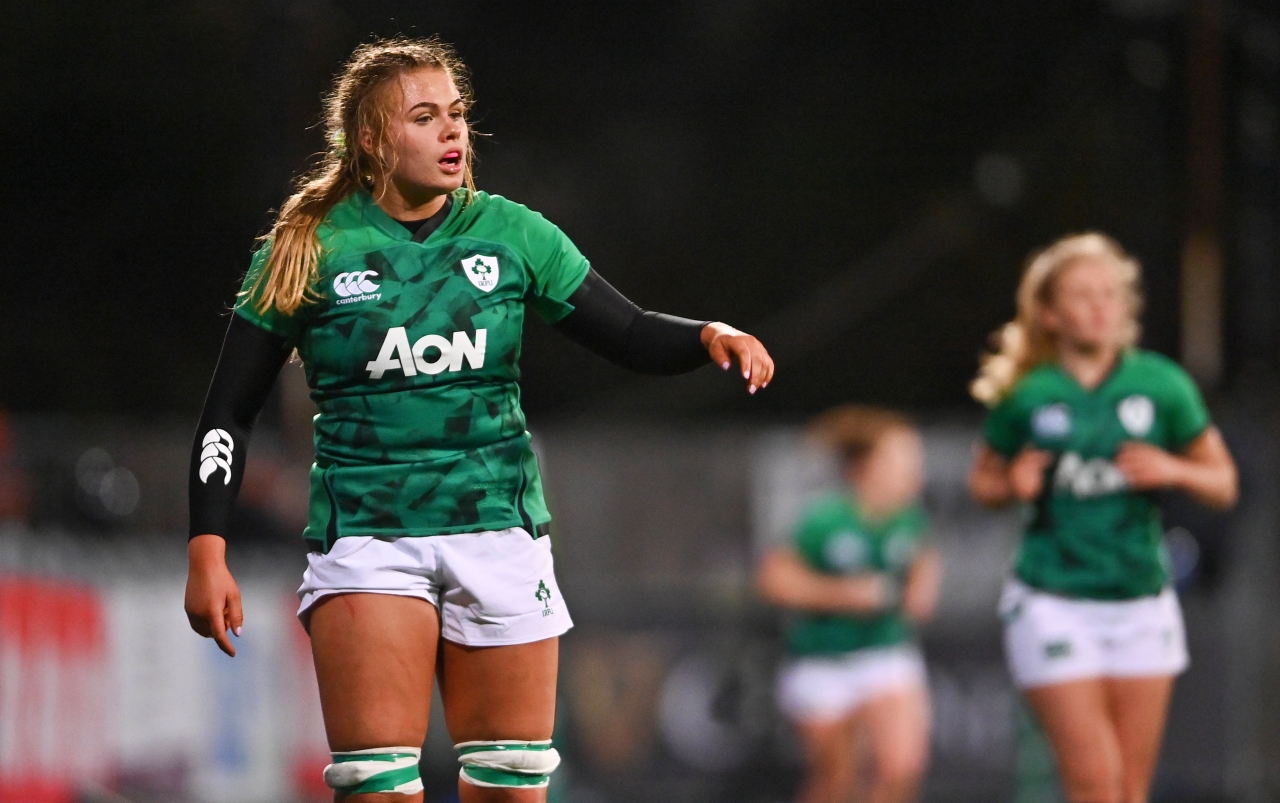 "I was down at Rosegreen and Fethard two nights a week," says Dorothy Wall of her early days training and playing with her school and club.

"My mum has done serious mileage getting me to different training sessions. And then, from club there was Munster underage, and we'd be down in Cork or Limerick twice a week. I loved that.

"And, from that, myself, Enya (Breen) and Emily (Lane) were actually the backline for the inter-pros, and we won that in my last year. Emily at 10, me on the wing and Enya at centre. That was a good year!"

END_OF_DOCUMENT_TOKEN_TO_BE_REPLACED

From there, Wall was called into the Ireland Sevens underage squad and then the senior set-up just after she had completed her Leaving Cert. She was capped in Sevens, at senior level, in 2019 and the senior XVs call-up arrived soon after. She now has four Test caps for Ireland - with a fifth upcoming against Wales - and she is still four weeks shy of her 21st birthday.

While Beibhinn Parsons tops her for an embarrassing Ireland debut story, Wall is not far off.

She made her debut in the 2019 Six Nations and ended up texting her cousin, in America, rather than the team doctor when she had a dicky stomach on the day of the game.

"I said, 'Oh, Matt, my stomach feels funny. Is there anything I can take?' It was match-day and I didn't want to be feeling sick for the game.

"Matt [my cousin] gets back and goes, 'I can recommend these alkaline things or have you tried ice water, or going for fresh air?' I got back and said, 'That's really helpful, but can you actually give me the medication, because I need it'.

"He kept recommending stuff until I went, 'Can I get that off you?' He replied, 'I'm actually in the States right now. Are you in America as well?'

"I was like, 'Wait, I've made a big mistake here!' Turns out it was my 25-year-old American cousin that I WhatsApped about my stomach issues on the day of my Ireland debut!"

Wall says she was mortified by the mistake.

Still, it kept her mind off the matter of making her debut against Scotland, later that day. She ended up flying it, unsurprisingly, and helped Ireland to a hard-fought 18-14 win over the Scots.

Ireland take on Wales in their Six Nations opener on Saturday evening. Kick-off at Cardiff Arms Park is at 5pm, with the game live on RTÉ2 and RTÉ Player.


popular
Names beginning to emerge from Lions stand-by list for South Africa
The SportsJOE 12 o'clock quiz | Day 351
"I'd play it in the back garden if I could. We've been training for this since last September"
Player ratings as Man United and Liverpool play out goalless draw
Finally, Gaelic football is returning to our TV screens - what's on and where?
"Some people just have different passions" - Geezer sees where Clarke is coming from
"I’d love to do my Colin Corkery impression and play Junior B football. It depends on the body"
You may also like
1 day ago
Ronan O'Gara will never forget his first encounter with Jonah Lomu 'in his pomp'
3 days ago
Ireland confirm summer Tests, in Dublin, against USA and Japan
1 week ago
Performances against England saw Bundee Aki and Jack Conan become Lions
1 week ago
James Ryan and Iain Henderson may be fighting for one Lions spot
2 weeks ago
Tadhg Furlong declared 'single most important player for Lions touring party'
2 weeks ago
"It's going to be the biggest thing in this person's life, ever" - Rory Best reveals his Lions captain pick
Next Page