There aren't many other referees in world rugby who get under Irish rugby fans' skin.

Generally, when Wayne Barnes officiates a game involving Ireland there tends to be some level of controversy or feeling of wrongdoing with regards to a particular decision.

Many feel that Barnes is extra stringent on Irish players for whatever reason and that Ireland, more often than not, are on the losing side when he is in charge. 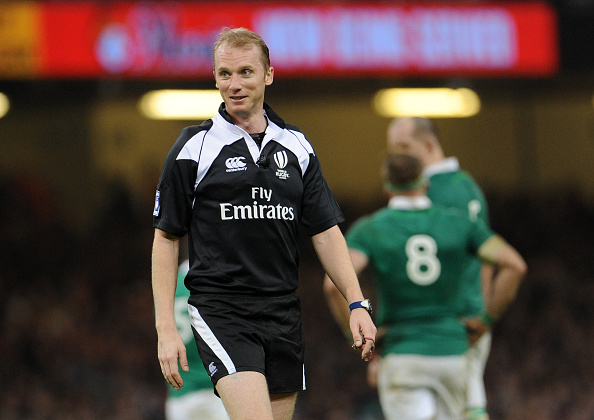 In fact, before the loss to Wales at the weekend, Ireland had lost nine of the 14 games in which Barnes had officiated.

Unfortunately for Joe Schmidt's side, that record increased again on Friday night.

One of the main issues that fans have with Barnes is that he is terrible for nitpicking.

Many felt that Robbie Henshaw's involvement in Rory Best's disallowed try would have been let slide by most other referees and this is something which former Leinster and Ireland star, Kevin McLaughlin, refers to on the latest episode of The Hard Yards.

END_OF_DOCUMENT_TOKEN_TO_BE_REPLACED

"Does marginal decisions, he just tends to go against Ireland," McLaughlin said. "Everytime I watch him referee Ireland, I know it's going to be tricky."

McLaughlin also took annoyance with the fact that Barnes did not refer to the TMO for the forward pass in the build up to Wales' first try.

"The fact that he didn't go back and have a look at forward pass for Wales' first try, what do you have to lose by going back to have a look? Look, we can't blame him and Ireland can't blame him, the fact is, Robbie doesn't go in there and we score the try."

Donncha O'Callaghan, also appearing on The Hard Yards, sums it up perfectly when it comes to the English referee.

"Unfortunately, Wayne Barnes...and its always the frustrating thing with Wayne Barnes, he's always right! It's to the letter of the law."

You can listen to the lads discuss Barnes' performance at 28:45 below.

popular
In defeat, Jerry Kelly dies with his boots on in coming of age final display
The SportsJOE 12 o'clock quiz | Day 286
QUIZ: You have 30 seconds to answer this one tricky football question
SportsJOE 2000s Football Quiz | Round 11
You'll have to be a diehard fan to get 20/20 in this Liverpool players of the 90s quiz
"Djokovic is a tool" - Tennis world turned upside down in day of days
"I knew I didn't have the pace or strength, it was just get it and try kick it left or right"
You may also like
6 days ago
Darren Cave tells House of Rugby about one part of rugby he definitely doesn't miss
1 week ago
"He's ruptured his hamstring off the bone and he’s trying to get up into the defensive line"
2 weeks ago
"I got the scan and it was literally broken in half" - Ciara Griffin on her first Ireland training session
1 month ago
"I don’t know what his problem is with me" - James Lowe on Liam Williams clash
1 month ago
James Lowe joins House of Rugby to talk Test debuts, Liam Williams and Chris Ashton
1 month ago
Brian O'Driscoll turns tables on South Africa after Ireland's World Cup draw
Next Page