Big things were predicted of him from an early age.

Conor Murray's rise to an international Test quality scrum-half was certainly a quick one.

The St. Munchin's alumnus made his European debut for Munster against Brive in April 2011.

Six months later he was starting for Ireland in the quarter-final of the World Cup against Wales in Wellington.

Since then, Murray has evolved into a world-class scrum-half. He has become an irreplaceable member of both Munster and Ireland teams. He is that far ahead of everyone else in this position that his absence diminishes the performance of both sides.

That much is clear.

His meteoric rise didn't come as a surprise to some of his former teammates and coaches, even from an early age they could see that this young man from Patrickswell would go on to achieve huge things. 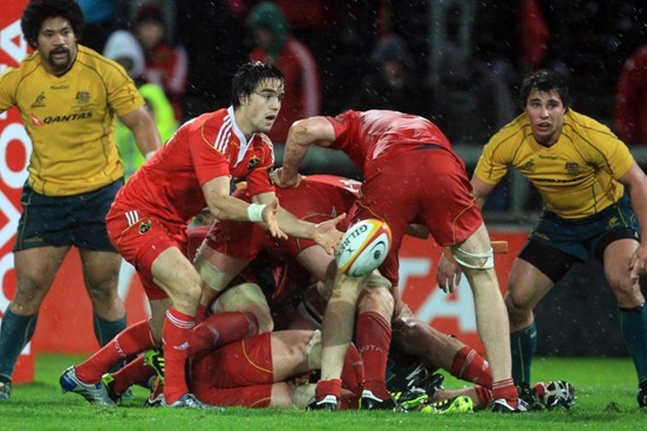 Donncha O'Callaghan, who would have been around Murray during the early stages of his career, recalled on The Hard Yards that he was shocked by Tony McGahan's (then head-coach of Munster) opinion of Murray.

"Tony McGahan who was the coach at the time and who's really tough on guys, was always looking for the chink in the armour or their weakness and I remember how well he spoke of Conor and it would nearly shock you because to be fair, I don't really remember him speaking well of anyone!

"At a young age he was saying that Conor is the real deal and was willing to give him his head and push him on."

END_OF_DOCUMENT_TOKEN_TO_BE_REPLACED

With this amount of quality, comes risk, however.

Murray's importance to Munster and Ireland is unequivocal and there is no doubt the player is up there in the 'world-class' bracket. His summer exploits with the Lions only added to his aura, and standing in the game.

You can listen to Donncha O'Callaghan's, Johnny O'Connor's and Mike McCarthy's praise of Murray in The Hard Yards [below].


popular
McGregor admits shout from Dustin Poirier's corner got inside his head
Roy Keane story shows the power he had at Manchester United
McGregor's first words to Poirier after defeat show where the damage was done
Dustin Poirier annihilates Conor McGregor to earn stunning UFC 257 victory
Khabib Nurmagomedov reacts to Conor McGregor's shock UFC 257 loss
Jolie Poirier certainly let her voice be heard after her husband's win over McGregor
He'll be remembered as a footballer but Keith Higgins has always been a hurler
You may also like
23 hours ago
Two uncapped Munster players backed for Ireland's 2021 Guinness Six Nations squad
5 days ago
"That was the one game that I cried after" - Mike McCarthy
5 days ago
QUIZ: You'll need to be a massive Ireland fan to get all these one-cap wonders
1 week ago
Ireland's best uncapped prospects for the Guinness Six Nations
1 week ago
Darren Cave tells House of Rugby about one part of rugby he definitely doesn't miss
1 week ago
"He's ruptured his hamstring off the bone and he’s trying to get up into the defensive line"
Next Page