Ian Madigan may not have envisaged playing in the second tier of English club rugby when he returned from Ireland's tour of South Africa last summer.

All Blacks as teammates. €500,000 a year salary. Playing under Pat Lam. Guaranteed starting run as outhalf.

They are four reasons that Ian Madigan will fall back on as he follows the progress of Bristol in the Aviva Premiership over the coming months.

END_OF_DOCUMENT_TOKEN_TO_BE_REPLACED

The Ireland outhalf looks to have secured the early release he sought from his Bordeaux-Beglés contract after less than a season with the Top 14 club.

Madigan was hopeful of a return to Ireland and told us, in February, that he would happily play for any of the Irish provinces. 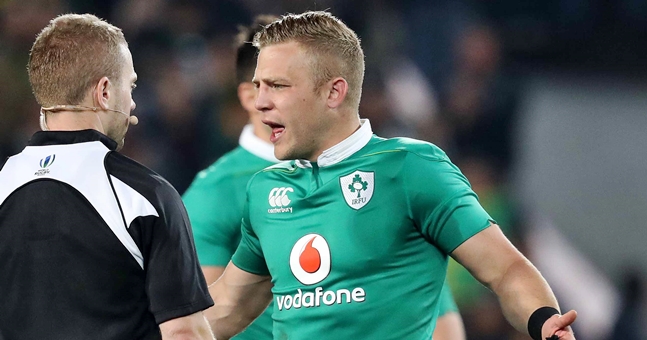 Leinster, his former club, were top of his wishlist but, with Johnny Sexton, Joey Carbery and Ross Byrne on their books, they appear to have moved on. Madigan took a considerable pay hike upon his move to France and he would have been unlikely to secure a similar deal from the IRFU.

When asked about a possible return to these shores, last month, Ireland head coach Joe Schmidt commented, "He has sold his rugby skills to Bordeaux and I expect him to honour that deal."

The 27-year-old looks to have gotten his wish to be released a season early from that deal. The42.ie is reporting that Madigan is set to link up with Lam at Bristol next season.

This comes after clubs such as Northampton Saints, Sale and Worcester all expressed an interest in securing his services for next season.

END_OF_DOCUMENT_TOKEN_TO_BE_REPLACED

The major catch in this move would be the extreme likelihood of Bristol starting 2017/18 in the English Championship. Mark Tainton's men were heavily beaten by fellow Premiership strugglers Worcester Warriors this afternoon to further sink into relegation trouble.

Worcester, who had Ireland's Donncha O'Callaghan in their second row, blitzed Bristol in the first half and eventually won 41-24 to move seven points clear of them. O'Callaghan played 68 minutes of the match, made a couple of strong carries and landed four big tackles.

In the space of less than two years, Madigan could go from being Ireland's starting 10 in a World Cup quarter final to helping a new-look Bristol side plot their way back from the second tier of English club rugby.


popular
The FootballJOE Pub Quiz: Week 11
Man United's tactical issues summed up in six shocking screenshots
Manchester United players 'lose faith' in Solskjaer after Liverpool pasting
O'Hora and Keegan hammer into each other, both of them only revelling in it
McBrearty has dramatic equaliser ruled out as Naomh Conaill win Donegal grudge game
Jesse Lingard seeks to clear up what United fan shouted when he was warming up
Liverpool's half-time words in Old Trafford dressing room will please fans greatly
You may also like
6 days ago
Seven exciting Ireland prospects pushing for November squad inclusion
6 days ago
"Where Johnny Sexton is so important to us now is being able to pass the baton"
6 days ago
"I'd love to finish on home soil but I can't see it. I won't be playing in the next Six Nations"
1 week ago
Ireland star Will Connors on his rude awakening playing GAA in KIldare
1 week ago
Andy Farrell's Ireland squad for November internationals to feature some exciting talents
1 week ago
Picking Ireland's best back row as multiple candidates hit early form
Next Page