We knew there would be a big difference but we didn't expect it to be quite so massive.

Ruby Walsh doesn't do breakfast and he hasn't done for years. It's one of the many sacrifices he makes to be one of the finest jump jockeys of his generation.

John Muldoon is usually about 1,000 calories deep before 9am.

Both men were guests on SportsJOE Live in Galway and compared their daily diets and routines. It made for a fascinating listen.

"At the end of the day," Muldoon said, "we eat pretty much the same as everyone else - a normal dinner, eggs and everything in the breakfast - but lots of it and try to keep the weight on. 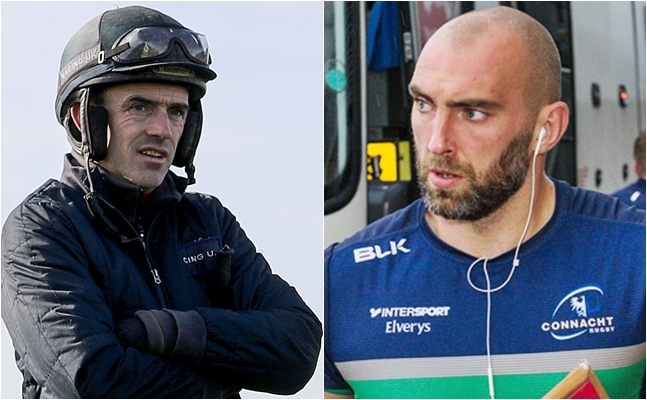 END_OF_DOCUMENT_TOKEN_TO_BE_REPLACED

"It's quite intense at the moment - we're doing lots of running and lots of weights. 4,500 calories will be gone pretty quickly. You'll burn them off."

Muldoon is a flanker so his calorie intake would be similar to that of Sean O'Brien, Peter O'Mahony, Josh van der Flier and CJ Stander. 4,500 calories is something that would make Walsh's eyes water. The champion jockey said:

"I eat twice a day, simple as. I have done for years - I'd have lunch and dinner.

"Today, I ate once. I had dinner before I came in here [around 6pm]. I was in work this morning and didn't get to eat on my way to racing [at the Galway Festival]. I had McDonalds last night, on my way home from the races... Earlier tonight, I ate tapas down the road.

"I know they say it's good to have breakfast first thing in the morning as it gets your metabolism down but [missing it] is good for me to make weight at 10-stone."

On average, top jockeys will eat 1,000 calories a day. The average consumption for men is recommended at 2,500.

Muldoon offered some additional insight on the daily routine at Connacht and the tailored training loads for each squad member.

"With GPS [tracking] these days, no stone is left unturned," he said.

"It tracks how many metres you've run in a game, load capacity, contacts are monitored and the shifts in movement of the contacts. They're able to track everything and, during the week, they can tell you exactly what you need to do.

"You have a scale of four different [training load] sections so on a Thursday they are able to tell you, 'Right, we've changed the afternoon session to this because we haven't got the load contact in. We haven't got bump on'. So more bump for this week, or running and high speed metres."

Two tough sporting professions but we reckon we'd go for the 4,500-calorie one.


popular
Jurgen Klopp reacted like everyone else to Darwin Nunez headbutt red card
Jamie Carragher on the two Man United players Erik ten Hag can't trust
"I cannot believe how Nunez thinks he's going to get away with that!" - Jamie Carragher
"I went up to the Italians and gave them a big auld shoulder" - Paul O'Donovan does it again
Carragher and Neville brutally name Man United's biggest transfer flops since 2013
Man United have 'decided to sell' promising midfielder James Garner
Wexford Under-20 lights it up as Ferns win their first ever county title
You may also like
1 month ago
Join our ultimate sports quiz in Dublin for a chance to WIN a trip to a Premier League game
4 months ago
Join Munster legend Billy Holland for this free mortgage masterclass
6 months ago
[CLOSED] COMPETITION: WIN a two-night stay at the luxury Trident Hotel in Kinsale Harbour
8 months ago
Here's where you can find some incredible deals on exercise machines in 2022
8 months ago
WATCH: This clip shows just how amazing amateur clubs in Ireland really are
8 months ago
Pieta and Shane Carthy encourage people to take part in #HopeOverSilence this Christmas
Next Page