The acquisition of Joey Carbery has a lot of Munster Rugby fans excited about next season.

Carbery will compete with Ian Keatley, J.J. Hanrahan and Bill Johnston for the starting role at fly-half but Munster have a number of exciting options elsewhere in their backline for next season.

Johann van Graan's side will lose Simon Zebo to Champions Cup finalists Racing over the summer but they will add Sale Sharks full-back Mike Haley to their squad as a replacement.

END_OF_DOCUMENT_TOKEN_TO_BE_REPLACED

Haley will presumably compete with Andrew Conway for the starting full-back role while the return of Jaco Taute and Chris Farrell will beef up Munster's options in the midfield.

Here's a look at a potential Munster backline with alternatives named below the probable starters in each position: 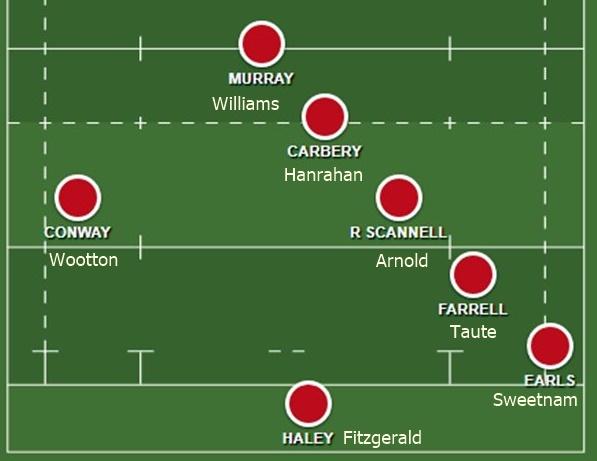 Former Munster centre James Downey said that he believes that Carbery can be the x-factor to unleash a Munster backline that was often decimated by injury last season.

"They have an exciting backline when everyone is fit and available," said Downey on the latest episode of The Hard Yards.

"We have this extra x-factor [Carbery] that can unleash that. As a defence you're going to be more worried about a 10 who is going to attack the line more and be more of a threat then it's going to create space for others outside."

Downey added that Carbery's Leinster background should not be an issue at the province and that former Leinster utility back and current Munster attack coach Felix Jones laid the blueprint for how to transition from Belfield to Thomond.

"When you're in that environment you buy into it completely," added Downey, who started his career at Leinster before later moving to Munster.

"Look at what Felix Jones has done. He's a fella that has just bought into everything. He's nearly Mr. Munster.

"People aren't expecting you to be involved as much as you are but you've just go to get in there, get down with it and forget about it.

"It's kind of a business but you've got to get immersed in the whole culture. Joey has to get down there and have the right attitude.

"You saw [Ian] Madigan beforehand with Munster and he didn't want to go down there. He was like 'no, I can't do it'.

"He has to go down there and forget about it because no one cares."

Listen to the full conversation from the 51:00 mark below.


popular
The FootballJOE Pub Quiz: Week 11
Man United's tactical issues summed up in six shocking screenshots
Manchester United players 'lose faith' in Solskjaer after Liverpool pasting
O'Hora and Keegan hammer into each other, both of them only revelling in it
McBrearty has dramatic equaliser ruled out as Naomh Conaill win Donegal grudge game
Jesse Lingard seeks to clear up what United fan shouted when he was warming up
Liverpool's half-time words in Old Trafford dressing room will please fans greatly
You may also like
1 week ago
The Leinster and Munster tries that should have both sets of fans excited
1 week ago
"The guy just can't catch a break" - RG Snyman back on gruelling comeback trail
2 weeks ago
Munster confirm RG Snyman has re-ruptured his cruciate ligament
2 weeks ago
Worrying scenes for Munster as RG Snyman lasts only nine minutes against Scarlets
2 weeks ago
Gavin Coombes and the fascinating tug-of-war for Ireland's No.8 jersey
3 weeks ago
Peter O'Mahony's try-saving actions cannot be understated or undersold
Next Page