"And now here is a man with a children's keyboard to entertain you."

David O'Doherty was a very special, and extremely entertaining, guest on Baz & Andrew's House of Rugby this week and he proved his rugby talents are not confined solely to his 1991 Leinster Junior Cup win for St Michael's.

The comedian joined Barry Murphy and Andrew Trimble for their show and, as well as unveiling a new back-spin kick the Irish team are welcome to use, he mused on selection possibilities for the Italy game, Johnny Sexton's attacking skills and escaped chimps up in Belfast Zoo.

O'Doherty brilliantly recalled [from 41:00 below] when he was asked into the Ireland camp ahead of their 2016 summer tour to South Africa. Most of the squad loved his 30-minute set but he's not sure CJ Stander was a fan. 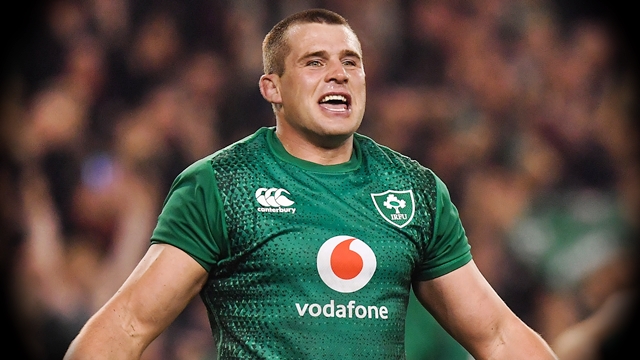 "I remember you saying," Trimble began, "that you cracked a joke and it got a few giggles. You looked around the around and then caught eyes with CJ!"

O'Doherty laughed at the recollection of meeting eyes with the indomitable Munster back-row.

O'DOHERTY: "It was one of those things where... I hadn't done a [private] gig like that for around 10 years in front of that few people where, over the course of that half hour, you've pretty much eyeballed everyone in the room. So, you've seen who is digging this and who is absolutely not!

"And it's fine - people like different things - but then there was some other real curveball stuff. I think it was Sean Cronin who had these, like, Wallace and Gromit's Wrong Trousers. There were like these physio trousers."

O'DOHERTY: "Yeah. And the things were like humming and then beeping every 15 seconds and I was supposed to not notice. Like, in comedy you're supposed to react to these ridiculous things! It felt, with respect to the group, like doing a gig in an old folks' home."

END_OF_DOCUMENT_TOKEN_TO_BE_REPLACED

O'Doherty had heard, somewhat unhelpfully, that a few comedians had been invited in for the rugby team only to struggle badly in front of them. The last performer the group had got in, before him, was hypnotist Keith Barry, who apparently flummoxed many of them by guessing their pin numbers.

"And now here is a man with a children's keyboard to entertain you," O'Doherty remarked. "I'm not sure CJ will be back."

That experience has not scarred the award-winning comedian too much and he has fond memories of performing in front of the likes of Paul O'Connell, Jerry Flannery and Duncan Casey in Dolans, down in Limerick.


popular
McGregor admits shout from Dustin Poirier's corner got inside his head
McGregor's first words to Poirier after defeat show where the damage was done
Roy Keane story shows the power he had at Manchester United
Khabib Nurmagomedov reacts to Conor McGregor's shock UFC 257 loss
Dustin Poirier annihilates Conor McGregor to earn stunning UFC 257 victory
Jolie Poirier certainly let her voice be heard after her husband's win over McGregor
He'll be remembered as a footballer but Keith Higgins has always been a hurler
You may also like
23 hours ago
Two uncapped Munster players backed for Ireland's 2021 Guinness Six Nations squad
5 days ago
"That was the one game that I cried after" - Mike McCarthy
5 days ago
QUIZ: You'll need to be a massive Ireland fan to get all these one-cap wonders
1 week ago
Ireland's best uncapped prospects for the Guinness Six Nations
1 week ago
Darren Cave tells House of Rugby about one part of rugby he definitely doesn't miss
1 week ago
"He's ruptured his hamstring off the bone and he’s trying to get up into the defensive line"
Next Page