Promising Irish centre forced to retire due to concussion

The 26-year-old has hung up his boots for good under doctor's instructions. McSharry met with a neurologist recently who advised retirement, which he announced through a statement on Wednesday.

"Although I am devastated that my time as a player has come to an end, I know that it is the only decision available to me after speaking to the specialist."

"I have thoroughly enjoyed my time as a professional rugby player with Connacht Rugby. I arrived here as a 21 year old and Galway became my home over the past five years."

McSharry had been one of the provinces most promising players in his first few seasons with the club and was called into Ireland's training squad during the 2013 Six Nations.

However, a slew of injuries, including four concussions, in 2015 saw his playing time severely reduced. It is understood that the concussion he suffered against the Newcastle Falcons last December essentially ended his professional rugby career after making 65 appearances for Connacht.

"I would like to take this opportunity to thank IRUPA, all the supporters, volunteers, staff, players and my friends and family for their continued support over the years."

"I would also like to thank all the coaches who have helped me along in my career, from my schoolboy days in Templeogue college, right through to UCD and into the professional set-up.

"I leave Connacht Rugby with incredible memories that I will cherish forever and I am hugely proud to be leaving as a Pro12 champion. I wish Pat and the team huge success for the season ahead." 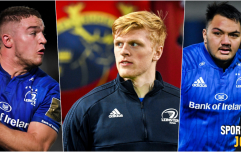 Six Leinster players that could benefit from a provincial switch

END_OF_DOCUMENT_TOKEN_TO_BE_REPLACED

McSharry isn't the only player from the province who has been forced to retire for this reason. In 2014, Craig Clarke was advised to retire after sustaining multiple concussions over the space of three years.

On the latest episode of the GAA Hour Hurling Show Wooly and the lads reflect on a monumental weekend of action. Listen below or subscribe here on iTunes.


popular
Carragher pushes all the right buttons and Keane delivers in gold
Jermaine Jenas' reaction to Eamon Dunphy punditry is absolutely hilarious
Conor McGregor's next fight narrowed down to two options
"At the end of it, you're just saying, 'thank God I didn't block that ball down'"
Andy Farrell names Ireland squad for crucial England game
The Tony Kelly show in the storm as forgotten man Shanagher shows his worth
Converted corner back sums up the magic of Davy Fitz
You may also like
1 month ago
Injuries to three form players cause Six Nations concern for Andy Farrell
1 month ago
Sean Cronin back in blue for clash with shuffled Ulster side
2 months ago
Irish sides must do without World Cup stars for festive inter-pros
2 months ago
Connacht do a Connacht as nerveless late try sends Sportsgrounds wild
2 months ago
Some big calls in Champions Cup Team of the Weekend
3 months ago
"If I was going to watch a game, I'd go, 'Oh Jack Carty is playing. Yes!'"
Next Page