That comment from Dan Leavy - during his appearance at a live recording of Baz & Andrew's House of Rugby - elicited little sympathy. The Leinster and Ireland flanker turned 25 on Thursday and reflected that he was not one of his teams' young guns any more.

There was plenty of sympathy, however, when Leavy revealed the awful extent of the leg injury that ended his season, his World Cup hopes and will not see him return until 2020 at the earliest.

This time last year, Leavy ended his season as a double winner with Leinster and a Grand Slam champion. He was likened to England legend Richard Hill, by World Cup winner Will Greenwood, and declared 'an Irish invincible'.

Self assured as he is, Leavy would not have bought into the extraneous hype and would have told himself 2018/19 was a chance to build on two excellent seasons. He had gone from Ireland's fourth-choice openside to a player that, along with his key lieutenants, Joe Schmidt hoped to build a World Cup tilt around. 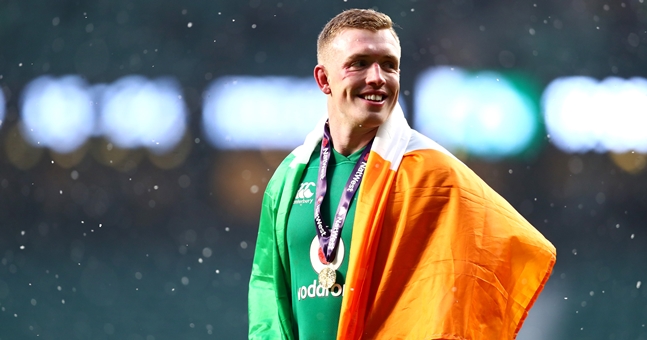 Injuries fragmented his time on the pitch, this season, and though he made nine Leinster appearances, he only added one Test cap and missed out on the All Blacks victory, in Dublin, last November. His abrasive, physical presence was certainly missed in the Guinness Six Nations.

Leavy returned in time for Leinster's Champions Cup quarter final against Ulster and came off the bench during the second half of an absorbing, punishing fixture. The flanker lasted less than 10 minutes, however, as his leg buckled horribly when he was cleared from a ruck by two Ulster players.

On House of Rugby (from 11:00 below), Leavy revealed the full extent of that gruesome injury, and when he hopes to be back. 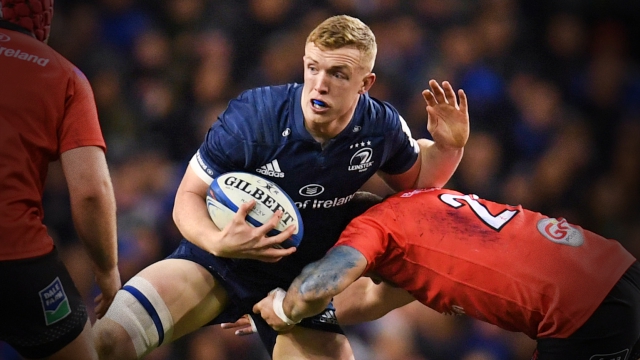 Dan Leavy is tackled by Sean Reidy of Ulster during the Champions Cup Quarter-Final at the Aviva Stadium in Dublin. (Photo by Ramsey Cardy/Sportsfile)

"It happened during the end of the Ulster game," says Dan Leavy. "Someone went off their feet, I was caught in a poaching position and my knee sort of got hit, and dislocated backwards.

"I've had a few knee injuries before. I actually played against Ulster in a pre-season game, about three or four years ago, and I got rolled out of a ruck by big Nick Williams and I had a bit of a dislocation then too, so I knew straight away.

"That time, it popped back in. This time, it was out and it wasn't going back in. I was giving it a rattle myself, to see if it could pop in, which, I'm thinking, isn't the best idea, in hindsight.

"So the physios came on and popped it back in and I had two of those (oxygen) pipes and it was sweet cinnamon for the rest of the evening!"

Leavy says he was told, the following day, about how he coped with the injury as he was convalescing in the Leinster dressing room. The only issue here was, he could not recall a single minute of it, or his conversation with head coach Leo Cullen.

Leavy injured as he attempted a poach against Ulster. (Credit: BT Sport)

END_OF_DOCUMENT_TOKEN_TO_BE_REPLACED

"A few of the guys popped over, just to say hello," Leavy comments. "I had unbelievable support from friends and family, after, and players, everyone coming over with their wishes and stuff. But the guys came over and after a chat [about it] it very quickly blew over and I don't want to dwell on it.

"They told me I had said, 'I'm getting nothing from the pipes', like no relief. And they were looking at me [and] wondering, 'Is he for real?'

"They proceeded to tell me that I had been in the changing room for about 20 minutes and had been talking to all the lads. I have no recollection. I literally got wheeled in and, they were saying, I looked like an alien. White as a ghost, waving and smiling to everyone....

"All the lads were coming up to me - and this is hearsay now because I can't remember this - and telling me Leo had come over to me. Now, I had little flashes [of this], but I said to Leo, 'This is as good as it gets' and I gave him a hug!"

Leavy jokes that he repeated the line, and hug, to Cullen the next time they met. That was fine and dandy, but Cullen didn't want it to become a running gag.

Getting down to the nitty-gritty of his injury, Leavy lists the damage:

"I did the ACL (anterior cruciate ligament) and PCL (posterior) and I was in for surgery. I got it done over in London. I spent a week in hospital after the surgery and was going absolutely crazy during it.

"But it's into the straight and narrow now. I'm into rehab in the last week or so and off the crutches, and starting to move a lot better. It's definitely moving in the right direction, which is good."

"It's one of those ones. If I had something to rush back for. If the World Cup was at the end of next year, I'd try get back [for that] but that was the big one and I'm missing that goal. So I'm going to give it all the time it needs and make sure my body is right, and go from there."

Leinster and the IRFU will do all they can to help Leavy on his long road to recovery. He was given a new Leinster contract - announced midweek - and the province will send him to the United States, this summer, to talk with top NFL physios and rehab experts.

For Dan Leavy, 25 will forever be linked with the efforts to get his knee right and get back to the incredible player he is.

Many people that turn 25 do indeed feel they are getting on, but get his body right - as he has vowed - and Dan Leavy the player has a long, long way to go.