"They really played with some kind of collective purpose and that is something we have not seen from the Wallabies in quite a long time."

Georgina Robinson was not the only Australian left invigorated by what she witnessed at Suncorp Stadium last Saturday night. Here was a Wallabies team mixing dialled in aggression, statement-making hits, streetsmarts and daring, attacking play in one, cohesive outing.

"Australia probably wanted it a bit more," says Kevin McLaughlin. "That was the impression I got."

END_OF_DOCUMENT_TOKEN_TO_BE_REPLACED

Will Genia, Kurtley Beale, Israel Folau and Michael Hooper were all the big name Aussies going into the First Test and, to a man, they excelled. The supporting cast were impressive too - Dane Haylett-Petty looks a player, Marika Koroibete laid in some big hits, Izack Rodda was a rock-solid presence and Bernard Foley was on song.

The best player on the pitch, though, was a man who had not played a Test game in 18 months and who was badly cramping in both legs when he surged over for the match-clinching try - David Pocock.

The 30-year-old had a sensational return to the green and gold jersey. He secured four turnovers for is team, had 56 ruck involvements, stuck 19 tackles (according to FOX Sports), made seven carries and scored that late try.

McLaughlin and James Downey discussed ways Ireland could try to stem Pocock's influence on the Second Test, in Melbourne, on The Hard Yards [from 23:30 below] and suggested the recall of two Leinster players to counter-act his strengths. 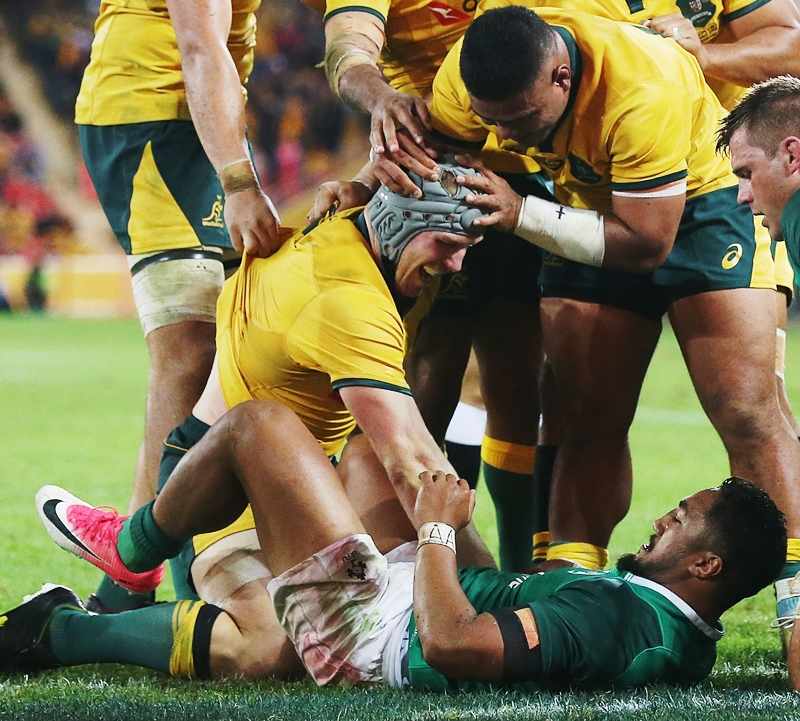 "Pocock and Rugby Australia copped it for the last 18 months for letting him have a sabbatical," says Sydney Morning Herald reporter Georgina Robinson.

"For letting him take a year out and travel, and build huts in Zimbabwe and fulfil that side of his personality; fill his soul up a bit. And when he came back at the start of the Super Rugby season, he had to get some surgery on his knee; a bit of a clean-out. Everyone was just filthy, saying, 'How dare he? How can he just take a year off then get back and be in rehab on Brumbies time and Australian Rugby's time?'

"But surely that performance against Ireland is vindication of his choice and Rugby Australia's decision to grand one of their best players some time away from the game after a decade of service."

END_OF_DOCUMENT_TOKEN_TO_BE_REPLACED

McLaughlin spent much of his career, with Leinster and Ireland, getting stuck into rucks and either trying to secure his side clean, quick ball or disrupt the opposition's rucks as much as he was allowed to get away with.

McLaughlin can't help but admire the Wallabies turnover machine but he did not his actions at the breakdown with interest.

"It's pretty amazing because you talk of the 56 ruck involvements and him going in for 15 poaches, but he also made 19 tackles. It was pretty incredible but, you know what, he's generally illegal.

"Looking back at his approach and the way he actually makes his poaches... he actually has this ability to fall with the tackled player, attach to the tackled player. Doesn't release, gets straight back up and he never really releases the tackled player. He has such a low centre of gravity and huge upper-body strength. He latches on with his arms and uses his arms to leverage him up, and he gets his hips up in the air. He paints a really nice picture for the referee."

"And he isn't always actually going for the ball," McLaughlin adds. "Sometimes he is just blocking the ball in. So it looks like he is trying to get the ball but he's in a really nice position and it is next to impossible to clean him out. Because he falls with the tackled player and there is no release, it is very hard for the referee."

Pocock was named man of the match [and no-one was arguing] despite giving away two penalties close to his own posts. Such was the havoc he wreaked for the rest of the game. McLaughlin disagrees with Alan Quinlan, who said on Sky Sports that Pocock was harshly pinged for one penalty. "Technically, if you are part of the tackle you have to release. And I don't think he does a lot of the time.

"But the way he does it, he disguises it unbelievably well for the referee! And he's next to impossible to move once he latches on and gets those big arms on the ball."

"He tackles, swoops, holds on and gets his bum up in the air," Robinson chimes in. "He does just make it look like poetry in a way, which I never thought I'd say about a defensive breakdown!"

McLaughlin loves the spectacle of the man in the grey scrum-cap stalking across the pitch, hunting turnovers or seeking merely to disrupt Ireland at the breakdown as much as possible. 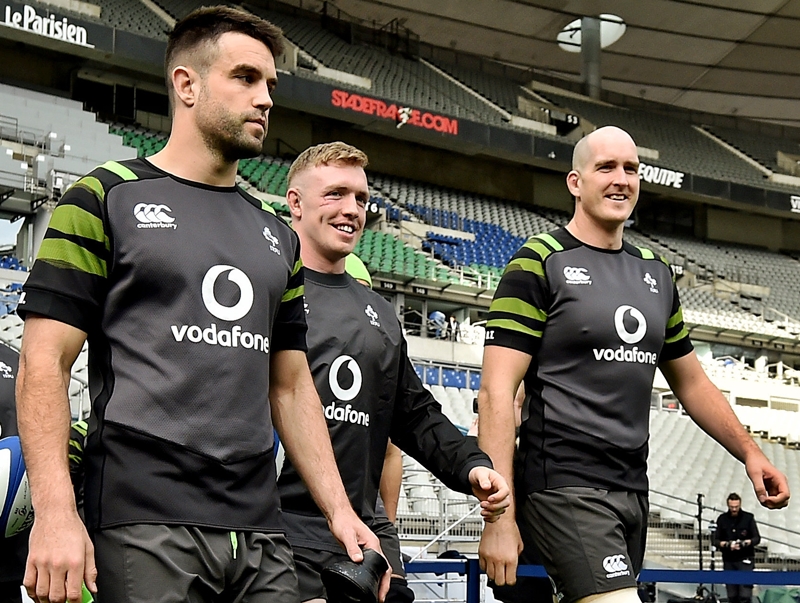 He predicts that Ireland will be putting a similar cap on a squad member during this week's training drills:

"They'll be putting one of the poor bench players in a grey scrum-cap this week and kicking the absolute shite out of him. I guarantee it... It may be Tadhg Beirne, I guess. The absolute perfect target!"

As for how to Pocock-proof Ireland as much as possible, they can do what they did well for the first 20 minutes of the First Test and pin him into rucks so he can't get to the next one or run directly at him so he is the one making the tackle rather than nipping in to poach.

"Joe Schmidt is going to have a meeting with the referee (Paul Williams) ahead of the game," McLaughlin notes, "and the first thing he is going to say is, 'Pocock needs to release after he makes the tackle and before get gets back over the ball', It is going to be the number one thing Joe will ask him to look at. The second thing is they will look to target him earlier."

Option three, according to Downey, may be to 'take Pocock out early'.

"You see him and you target him. I wouldn't even worry about the ball. I'd go straight for him and just try clear him out."

Option 4, suggests McLaughlin, is latching onto the ball carrier. "As they go to ground," he says, "you are sliding beyond them and you're smashing beyond the tacklers."

There is no better man for doing that in Irish rugby, at present, than one of the most underrated players in the squad - Devin Toner. "He is the king of the latches," McLaughlin remarks. "He makes incredible latches and bashes guys through contact."

The 6-foot-10 lock is some man for clearing out beyond the ruck, too, and making it awkward as hell for the opposition to get through the front-on gate.

McLaughlin is not the only one who cannot wait for the "fascinating" contest that should ensue when Leinster flanker Dan Leavy is thrown into the breakdown mix.

The 23-year-old has been in some phenomenal form since the turn of the year and would relish going toe-to-toe(s) with Pocock and Hooper.


popular
"I went up to the Italians and gave them a big auld shoulder" - Paul O'Donovan does it again
Luke Chadwick recalls furious Alex Ferguson reaction when he rejected loan move
Wexford, Waterford and Kilkenny down some good men as Australia calls
Wexford Under-20 lights it up as Ferns win their first ever county title
Man United have 'decided to sell' promising midfielder James Garner
Graeme Souness under fire for calling football a ‘man’s game' while sat with Karen Carney
Erik ten Hag's training ground punishment for Man United shows there may be hope yet
You may also like
2 weeks ago
“My confidence was on the deck" - Aaron Connolly explains why he has made the move to Italy
2 weeks ago
Every Irish transfer in football, this summer, as several big deals get done
3 weeks ago
Six Irish players make damn impressive 'World XV' that would take some beating
3 weeks ago
The frontrunners for Ireland's 33-man squad for the 2023 World Cup
3 weeks ago
All Blacks media manager explains why Ian Foster appearance was cancelled after Ireland defeat
3 weeks ago
Warren Gatland selects nine Irish players in his strongest Lions XV, right now
Next Page