Craig Casey was in his element at North Harbour Stadium, on Saturday, as he faced New Zealand media for the first time on Ireland's summer tour.

The Munster scrumhalf is in line to feature in Wednesday's tour opener against the Maori All Blacks. He will hoping to press his claims, too, for Test squad selection.

END_OF_DOCUMENT_TOKEN_TO_BE_REPLACED

Casey is well versed on New Zealand rugby and spoke of how he was glued to TV footage on the 2005 Lions Tour - "probably my earliest Test match memory" - and the 2012 Ireland tour, when he was back in 6th class in his native Limerick.

Ahead of that Maori game, Casey spoke of how the Irish preparations are going, and the one tour aspect that threw him for an early loop. 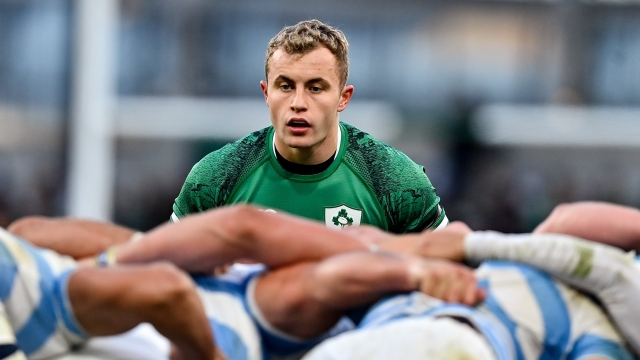 "I was absolutely wasted" - Craig Casey

END_OF_DOCUMENT_TOKEN_TO_BE_REPLACED

Only one of Craig Casey's six Ireland caps was away from the Aviva Stadium, and he has only played 10 Munster games outside of Ireland [from his 48 senior appearances with the province].

The 23-year-old is one of several young players in the Ireland squad lacking that touring experience that comes in so handy in tournaments, and for player development.

Asked what the biggest challenge of going long-haul for this summer's tour, Casey said, "The jet-lag. I've never experienced anything like it.

"I thought it'd be grand, but it was the second night when it hit me properly. I was absolutely wasted. It's weird to explain, [my] first time experiencing it.

"But we're over it now. We've had two blow-out sessions here, so it's been good."

END_OF_DOCUMENT_TOKEN_TO_BE_REPLACED

Casey says 'it is a dream come true to be down in New Zealand' and notes how the squad have been studying as much video on Maori All Blacks games, and key players, as they can get ahead of Wednesday's game.

Of course, with New Zealand coming up on Saturday, Casey was asked about facing the three-time world champions at in the Test Series. A man with a keen awareness of rugby history, the scrumhalf knows Ireland have not won a Test match in New Zealand, yet.

"Our mind-set is that we want to win the Test Series and the Maori All Black games. Of course, coming down to New Zealand is an entirely different challenge that playing them in the Aviva. It's something we've touched on. It is a challenge, but it's a challenge we're relishing."