"Conor Murray is in a funk... He's a great player but nothing is going right."

When Conor Murray leaves the Test match fray well before we get to 60 minutes, he is either injured of something has gone badly wrong. Mike Tindall believes the Munster scrumhalf could do with a spell on the sidelines, in reserve to John Cooney, and he is not the only one.

Heading into the 2019 World Cup, Joe Schmidt kept faith in his long-time half back pairing of Murray and Johnny Sexton (with Cooney not even making the final squad). Andy Farrell followed suit when he took over from Schmidt and he appointed Sexton as captain after the retirement of Rory Best.

Sexton was one of Ireland's stand-out players in the opening Guinness Six Nations victory over Scotland and the 9/10 combination upped the ante in an impressive follow-up win over Wales, the 2019 Grand Slam champions. That result quietened the clamour for Cooney but it is resoundingly back following the 24-12 reversal at the hands of a revved up England side at Twickenham.

On the latest episode of Baz & Andrew's House of Rugby, former Ireland star Andrew Trimble admitted he would like to see Cooney get a run-out in Ireland's next championship match but he strongly defended Murray and claimed he was 'hung out to dry' against England. 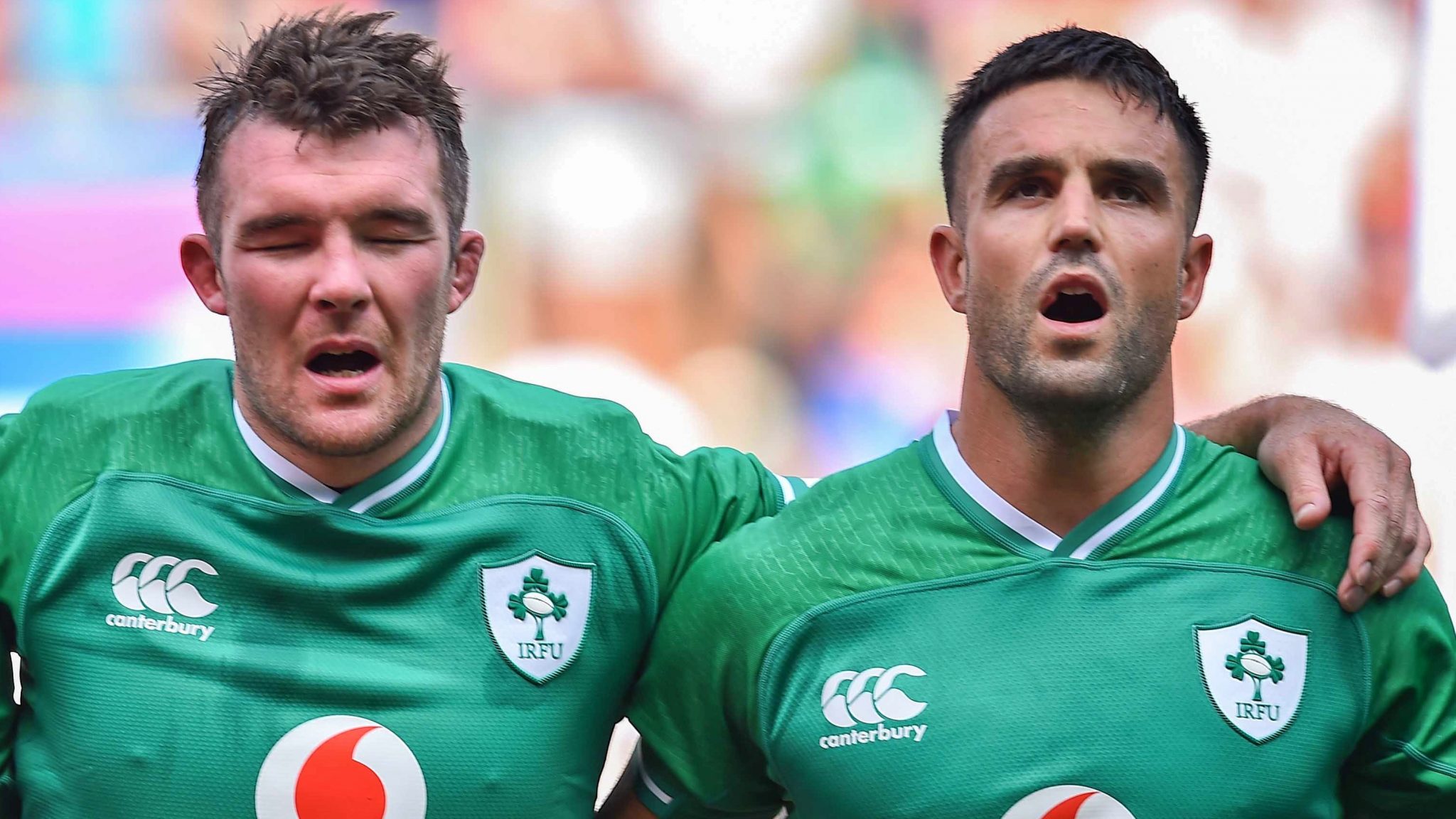 "I don’t buy into the fact that Murray had a shocker," says Trimble.

"He’s not quite where he was but I think he was hung out to the dry, where the forwards let him down. And maybe the coaching let him down because I don’t think there was enough deception or shape off those plays."

"Do you think we could have more deception in around 9?" Trimble asked Barry Murphy and Lynne Cantwell. "As Murray is just about to pass the ball, if you took a picture - and say like there’s 30 different pictures – I’d say there’s probably 28, 29 of them, you’d be able to say, 'I bet you the ball goes to him'.

END_OF_DOCUMENT_TOKEN_TO_BE_REPLACED

In terms of painting pictures to tie up the opposition defence, pressure from the likes of Maro Itoje and a lack of protection from the forwards, no piece of play illustrates that more than in the 31st minute when the England lock blocked an attempted clearing kick from Murray.

With Ireland trailing 14-0, Ireland's No.9 went to CJ Stander and Dave Kilcoyne as a couple of one-out runners. Stander was driven back a metre while Kilcoyne made zero ground. England were on top and Murray took the option to kick away possession in the hopeful return of gaining territory.

As you can see (below), Itoje was edged offside, beyond the Irish ruck. Murray called the encroaching Saracens man to the attention of the referee and touch judge. Itoje stepped back but was soon offside again and the vital inches (being kind) he gained allowed him to block Murray's clearance. 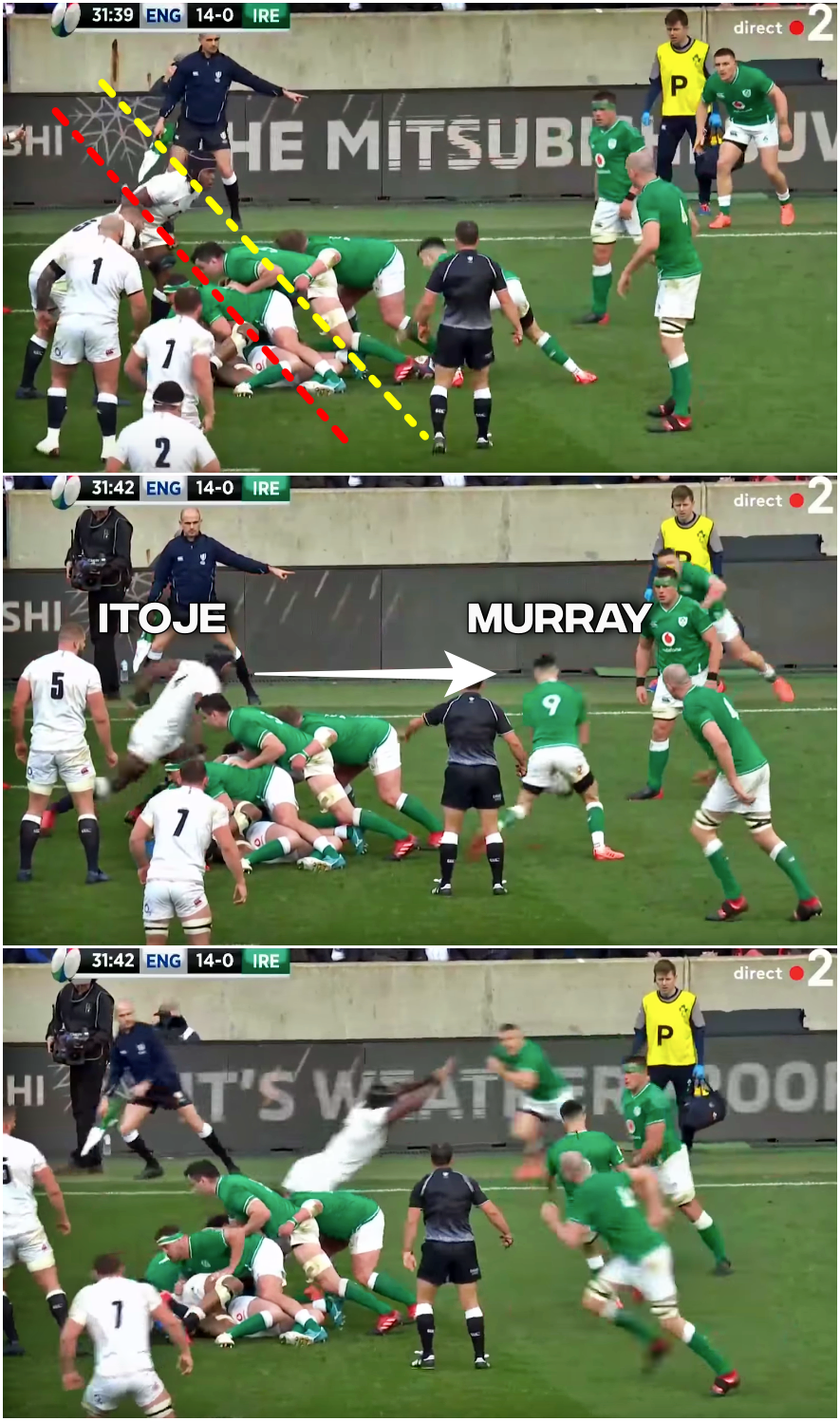 Looking at the clip (below), you will see that the forwards have got Ireland nowhere in two carries and Murray, following the Irish game-plan, opts to kick away the ball.

You have to wonder where the protection is from those around the breakdown, with no-one standing pillar to block Itoje:

The one-out carries and the kicks were telegraphed by the Irish players and Murray was put in a bind. Another sequence, on 33 minutes, shows how Ireland's ponderous, obvious plays were being picked off at ease by England.

Ireland start off with an attacking lineout about five metres inside the English half. Within six phases and 45 seconds they are back on their 22 and Andrew Conway is kicking the ball up-field to relieve pressure. 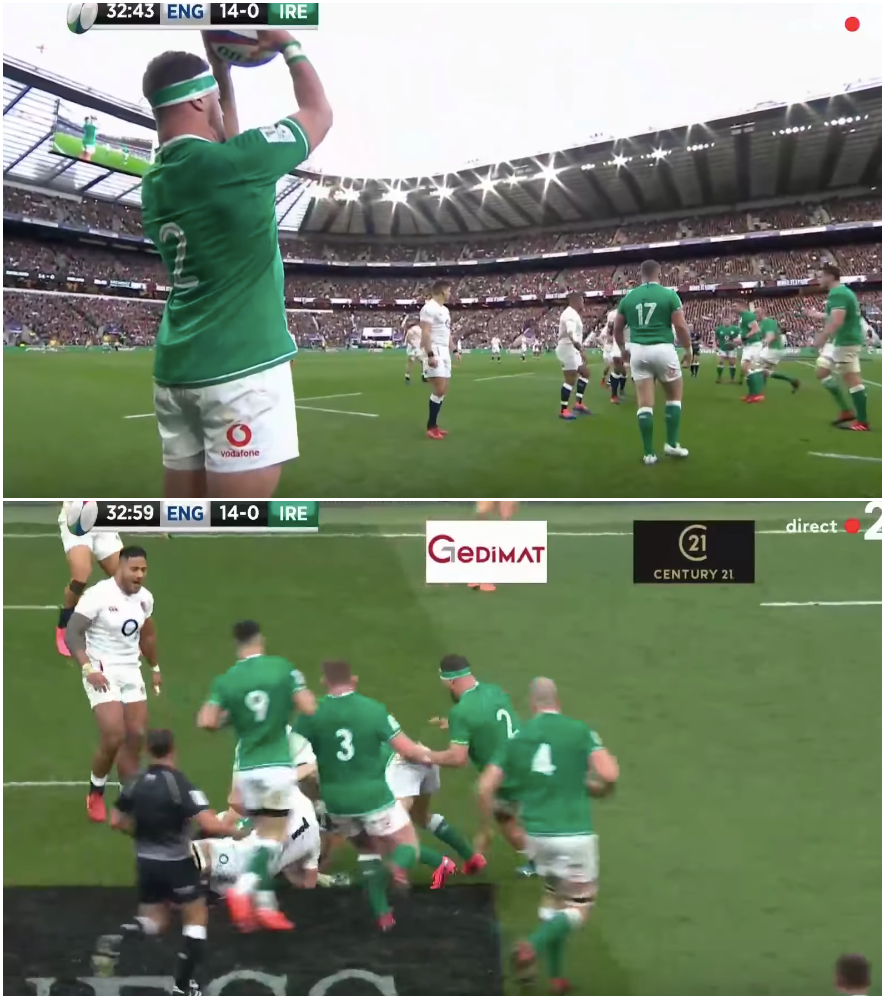 END_OF_DOCUMENT_TOKEN_TO_BE_REPLACED

Phase 1 sees Jacob Stockdale make a couple of metres before Sam Underhill presses up, on Phase 2, to drag Bundee Aki to ground. Ireland are back into their own half and get nowhere through a CJ Stander carry before Sexton, on Phase 4, pulls back deep to find Robbie Henshaw and hope he can get his side over the gainline.

Itoje [highlighted by an arrow below] gets up on Henshaw and dead-ends that escape route. Phase 6 sees Sexton pass to Jordan Larmour (circled), who finds Conway with an ambitious double skip pass. Conway was on his 22 when he received the pass but England were still piling forward so he kicked up-field. 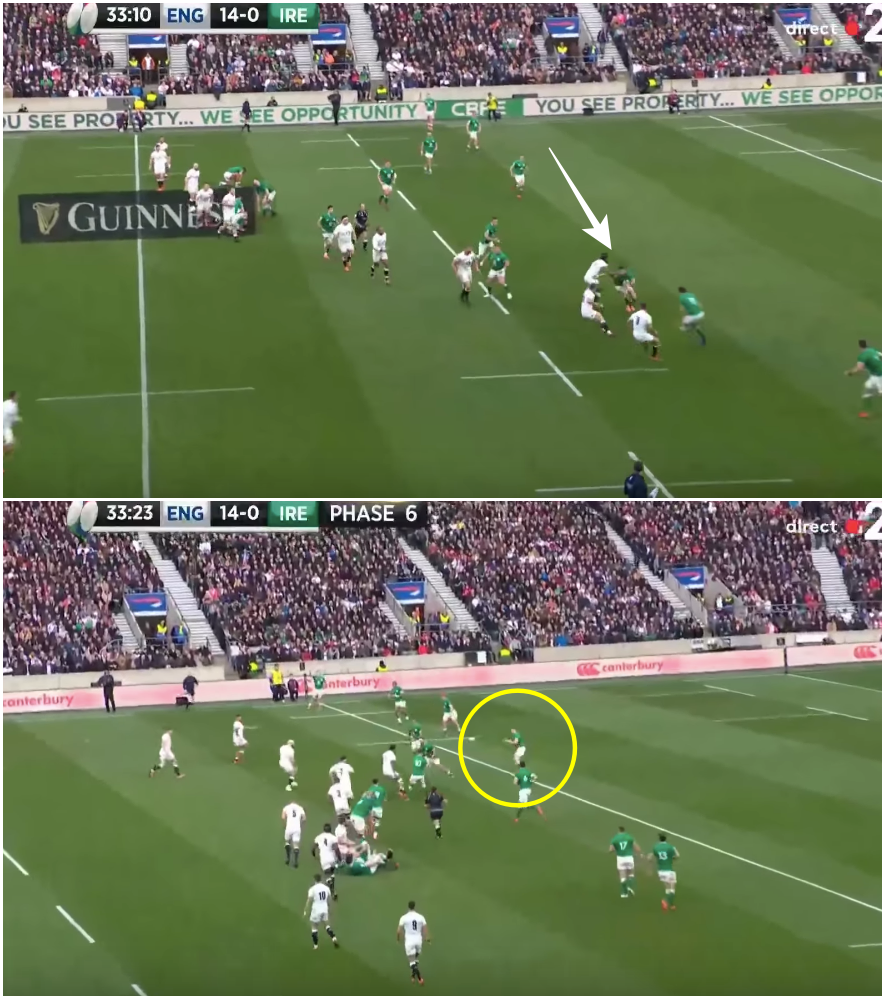 In all six phases - bar Devin Toner running one decoy line - you knew exactly where the passes from Murray and Sexton were going. Add to that England's relentlessness, their winning the physicality battle and Ireland lacking another playmaker in the backline and it was always going to spell trouble.

As Ireland lock James Ryan noted when we spoke with him on Tuesday, "Our shape could have been better as well. We're not making the lives of Murr and Johnny easy as forwards when we're too slow to load off 9 and 10. So we're too slow to get set and then we are set it's just kind of one-off runner. You're feeding exactly into England's game plan, they want to get off the line and get stuck in and smash you."

What Cooney brought to the party was some sniping runs of his own, something which Murray does not do as much as he did between his 2012 and 2018 peak. Split seconds are vital in Test rugby and the combination of Murray and Sexton could do with freshening up as, right now, they are taking too much out of the ball. 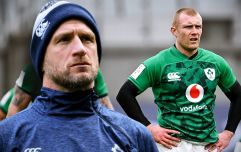 END_OF_DOCUMENT_TOKEN_TO_BE_REPLACED

Murray is likely to be a sub when Ireland next line out, but this is not the end or even the beginning of the end. A change in Irish playing style and some tweaks of his own and he could be back to his best.


popular
"I was like, ‘My ear is hanging off my head. Can you not see that?!'"
QUIZ: How well do you know Manchester United players of the 2010s?
The SportsJOE 12 o'clock quiz | Day 307
QUIZ: Identify the missing sponsors from these football jerseys
QUIZ: Name all 50 of these 2000s Champions League players – #4
Cristiano Ronaldo sets rough retirement date
"People that get All-Stars aren't just a cog in the wheel. These are the special, outstanding players"
You may also like
4 days ago
36-man Ireland squad announced for Italy clash
6 days ago
"People associate hardness, ruthlessness and 'Fear of God' with Paul, but that's 1% of him"
1 week ago
"You’re not pushing robots around the place. We all have bad days" - Ronan O'Gara
1 week ago
Tomás O'Leary calls for Craig Casey to get No.9 jersey for Italy
1 week ago
James Lowe facing into the biggest month of his career
1 week ago
James Lowe denied by the narrowest of agonising replays
Next Page