Conor Murray stayed true to his promise to be even more cautious with his neck.

Murray was withdrawn from Munster's starting team for Saturday's Guinness PRO14 clash with Connacht after suffering a knock in the warm-up at Thomond Park.

The full extent of Murray's neck injury will be revealed on Monday, after Munster have had time to properly evaluate their scrum-half.

Murray, who missed much of the first half of the season with a neck problem, was replaced by Neil Cronin for Munster's 27-14 victory and head coach Johann van Graan explained that it was the medical staff's decision to "err on the side of caution" with regards to Murray.

"He got a knock in the warm-up and a bit of stiffness, and we decided not to take any risks."

It should come as no surprise that Murray was not risked because the 30-year-old recently told SportsJOE that he would be overly cautious with any future neck issues and would not rush himself into a match if there was any lingering doubts about his fitness. 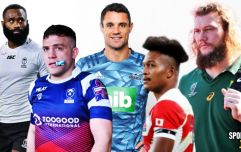 All the major rugby transfers made this summer

END_OF_DOCUMENT_TOKEN_TO_BE_REPLACED

"Going back way before the Six Nations, I took so much time with this neck. To make sure it was right," Murray explained.

"I know Brian [O'Driscoll] has said it before, that you're never really fully fit. You're always going to go into the game with a bang on the elbow, a dead leg or something annoying you.

"But, in terms of the neck, I was fully fit. If ever anything happened [with it] again, I would wait beyond the date they [the medics] said it would be okay. Even more so, I'd give myself another two or three weeks beyond when people said I could play, to make sure I was comfortable with it.

"People don't see if you're injured. If you have a bad knee or a bad ankle, people don't see that on Saturday. They see you and they expect a certain standard of performance from you."