"You're such a sausage man. Pick one!"

There was one hell of a Conor Murray vs. Craig Casey debate, last weekend, but both men will need to contribute against Antoine Dupont and Toulouse if Munster are to make the Champions Cup semi finals.

On Saturday, at Stade Ernest Wallon, the Toulouse scrumhalf was at it again. By 'it' we mean EVERYTHING and by 'again' we mean that each time the scrumhalf laces up his boots, he inevitably goes out and has a screamer.

END_OF_DOCUMENT_TOKEN_TO_BE_REPLACED

Dupont is currently so good that he was able to go off at about 80% his maximum in the Six Nations and still be huge. He comfortably won the 'Best Player' award as France claimed their first championship in over a decade, and in Grand Slam style.

Against La Rochelle, in another must-win game of must-win proportions, Dupont was electric as he made multiple line breaks and offloads in an exhilarating game, as well as grabbing a vital try from a block-down.

Best No.9 in the world

END_OF_DOCUMENT_TOKEN_TO_BE_REPLACED

The way rugby matters are shaping up, Antoine Dupont is on course for his second World Rugby Player of the Year crown in two years. In truth, he should have got the 2020 award, too, but officials opted against the big ceremony in the midst of the Covid pandemic.

Some fans and followers may put forward alternate candidates for the 'world's best' award, but very, very few would argue [with a straight face] that Dupont is not the stand-out No.9 in the globe, right now. Faf de Klerk sometimes comes close, but the crown rests steady on the head of Dupont.

It is a crown that was once worn by Conor Murray. Steady from the moment he stepped on the world stage, in 2011, the 2012 summer tour to New Zealand saw him step it up a notch. By 2014, he was the best in the northern hemisphere and, from 2016 to 2018, he was up there with Aaron Smith as the best in the world. The crown swapped about a few times, but Murray and the All Black were the two best run-and-gunners.

END_OF_DOCUMENT_TOKEN_TO_BE_REPLACED

Murray is 33, now, and although he has settled into the elder statesman 'finisher' for Ireland, he is the man Munster still entrust the 9 jersey to when the big games come about.

On the latest House of Rugby URC episode [LISTEN from 5:50 below], Munster centre Rory Scannell joined Greg O'Shea, Lindsay Peat and Darren Cave to discuss the upcoming Champions Cup clash with Toulouse, and which scrumhalf should start against the reigning champs. 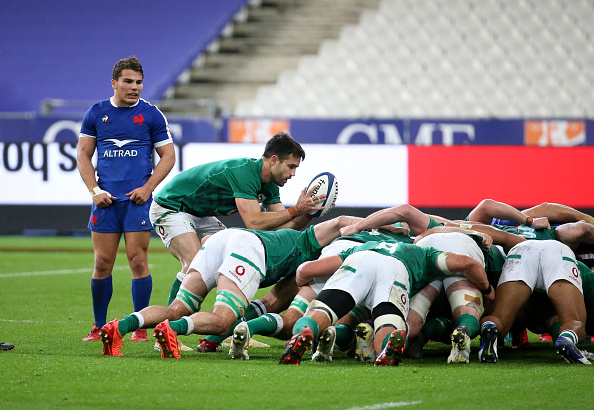 Conor Murray of Ireland prepares to put the ball through a scrum as Antoine Dupont of France looks on. (Photo by John Berry/Getty Images)

Ahead of the big Champions Cup clash with Toulouse, the House of Rugby gang, not for the first time, got stuck into the meaty topic - Conor Murray or Craig Casey to start?

Johann van Graan has tended to go with Murray in the Champions Cup, and big inter-pro outings, but Casey has been getting big minutes across the season. In his last game to make his voice heard, Casey came off the bench and scored two tries against Cardiff to lock up the try-scoring bonus point.

"He's a real favourite of mine," says Lindsay Peat. "His game has really evolved, and any time I see Munster put a consistent performance together, he has been at the heart of it. He moves the ball quick, gets forwards on the ball. Munster are playing this offloading game with a nice mixture of youth and experience, and I think most of your best performances have come with Craig Casey there [starting].

"Conor Murray has been a real stalwart for Munster but, for me, going into the business end of the season, I'd favour Craig."

"Do you think he should be starting?" Peat then asked Rory Scannell.

"Greg is a big Murray fan, I know that," Scannell remarked. Greg O'Shea has, indeed, spoke up for Murray on a couple of occasions on past shows.

Not too long retired, Darren Cave appreciated the tough spot Scannell was being put in - "So which one of your teammates do you like better? You have to pick one!" In fairness to the Munster centre, he made a call.

"With the last few weeks, Conor has been playing very well when he's started. Craig has been bringing a great impact off the bench, as we saw the other night. When Craig has started, he's had some great performances, as you've said. But I think the way things have been going the last few weeks has been working well - that last 20 minutes, when games open up, Craig has been coming on and having a huge impact. Two tries the other night. He's running around lads for fun.

"They're two very different players, as you said. Conor's kicking game is best in the world, I think, so the way we've been going the last few weeks, it's been working, so I wouldn't see it changing but I'm not picking the team."

When Greg O'Shea turned to Darren Cave to settle the matter, the former Ulster and Ireland centre stressed how both players have great qualities, and how Munster would do well no matter who they picked.

"You've got an opinion on everything, but not this?" O'Shea joked. "You're such a sausage man. Pick one!"


popular
Boris Johnson slams Jurgen Klopp for defending Liverpool fans booing national anthem
Gearoid Hegarty's harsh red card leads to a heated debate in The Sunday Game studio
French media rave about Caelan Doris and 'Playstation rugby' from Leinster
QUIZ: You have 60 seconds to answer one Premier League goalkeeper question
Pep Guardiola reveals what he said to Mark Noble during touching embrace
QUIZ: Can you name these 26 Premier League winners?
Ronan O'Gara's La Rochelle stand in Leinster's way after semi-final grind
You may also like
5 days ago
"He could be one of the world's best" - Sean O'Brien on rugby's latest speed demon
5 days ago
Picking the best sporting moment of the past decade is not simple
5 days ago
"I've probably watched every single Paul O'Connell speech" - Kyle Sinckler
5 days ago
"I hope we are all clear now" - Chris Ashton on post-match apology to James Lowe
6 days ago
James Lowe calls on Leinster fans to give Toulouse fans red-hot welcome
6 days ago
'I've met some of my best friends playing here' - Rugby, Canadian style
Next Page