The acquisition of Gerbrandt Grobler is the story that refuses to die, and for good reason.

The South African lock has been at the centre of a media storm this week having tested positive for the anabolic steroid drostanolone in 2014.

The 25-year-old has spent most of this season sidelined with an ankle injury, but his return to the Munster first-team fold has prompted a wider philosophical debate in Irish Rugby as to whether Munster and the IRFU should have welcomed a known doper into their ranks after he signed from Racing last summer.

Essentially, the question is were Munster and the IRFU satisfied that Grobler had served his ban and repented for his sins? Or, by signing him, have they actually endorsed a player with a history of substance abuse? Contradicting their 'zero tolerance' policy towards doping. 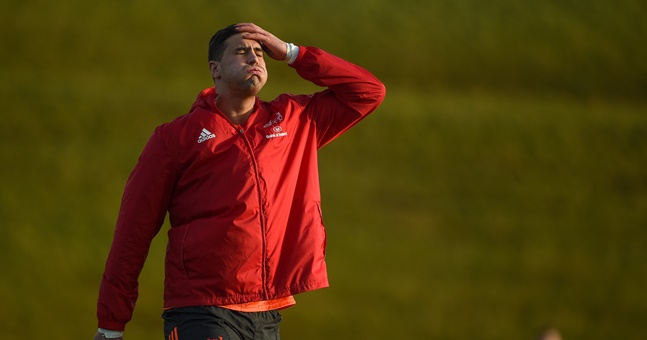 Before going on any further, it is important to note that Grobler was not a player developed in Irish Rugby, or even a player that took steroids while playing in Ireland, but a player, nevertheless, Munster and the IRFU welcomed and were pleased to have welcomed.

That is important to highlight because the furore that has emerged this week is a problem that Munster and the IRFU have created within their own ranks, not an issue they are responding to, but a situation they have brought upon themselves.

Therefore, if Munster and the IRFU have created this issue, and if this is a problem that Munster CEO Garrett Fitzgerald, IRFU Performance Director David Nucifora and IRFU CEO Philip Browne have rubber stamped, why are we hearing from Peter O'Mahony and Conor Murray before we hear from any of the aforementioned stakeholders?

Why have Murray and O'Mahony, two of Munster and Ireland's most high profile players, had to field questions on Grobler while those responsible stayed silent?

The players didn't sign Grobler. Peter O'Mahony was not the person who wanted to bring him to Thomond Park. Conor Murray didn't ask to be asked about whether he's happy to play with someone with a history of a positive test. 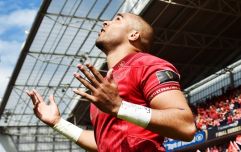 END_OF_DOCUMENT_TOKEN_TO_BE_REPLACED

When Martin O'Neill stalls for 15 weeks over his contract with the FAI, we want to hear from CEO John Delaney on why he hasn't signed yet, not David Meyler.

Murray and O'Mahony were put in a position on Tuesday where they had to answer for the past crimes of a new teammate.

Predictably, they defended him.

Interviewed Peter O'Mahony and Conor Murray today and they came out in support of Gerbrandt Grobler pic.twitter.com/3KP3U067Jy

"It's certainly not for the players," O'Mahony said to TV3 News when asked if Grobler's past was an issue for the team.

"It's important that we keep the game clean from an Irish Rugby point of view, from a Munster point of view. It is something that needs to be talked about.

"As far as I'm concerned with GG, he made some bad decisions and he has done his time. He is here with us now as a Munster player and we will stand by him."

"He gets the backing of us as players," he said.

"He completely accepts what he did, it was wrong, but does that mean he shouldn't play rugby again? I think that is crazy.

"It was the wrong decision, he was young and foolish. He paid the price for it. I think everyone deserves a second chance. He has learned from his mistakes."

The issue here is three-fold. Firstly, why do this to yourself if you're Munster? Why unhinge decades of developing a strong culture by bringing in a known doper as a stop-gap between the departure of Donnacha Ryan and the arrival of Tadhg Beirne? Why jeopardise years of growth for a short-term gain?

Secondly, people inside and outside of Munster and the IRFU knew that a day like Tuesday was coming in advance. And if they didn't, they should have known.

Everyone - every past player, every journalist and fan - would have known that any player would toe the party line if they were put in a position that Murray and O'Mahony were in.

If there was a party line or unified message for all players to follow, why did that message not also apply to Garrett Fitzgerald, the Players Advisory Board (PAB), David Nucifora and Philip Browne?

Why couldn't they toe that party line before the players if there was a message devised from inside the organisation in the entirely plausible scenario that what the players said to the media was not actually their honest opinion on the matter.

Then, on Wednesday, Philip Browne did face the press at the announcement that the Aviva's naming rights had been extended until 2025. He had a bit more to his response, he admitted that the policy for signing proving dopers would be reviewed, but not before the players' words were national stories caught up in this narrative.

"I think we probably need to consider how we would deal with something in a similar set of circumstances in the future."

Asked if another convicted doper could be brought into Irish rugby, Browne dismissed it as a “nonsense question”.

“The reality is that we will obviously consider our policies, we will consider how we deal with a a similar set of circumstances in the future."

Is it that difficult just to say 'no, we won't bring in any more convicted dopers'. What's there to consider other than the fact that he has just left the door slightly ajar when it should have been slammed shut.

"It's inexcusable using a performance enhancing drug," O'Driscoll said on Off The Ball. "I think a two-year ban for an anabolic steroid is ridiculously short. I wouldn't be against the encouragement of a liftetime ban because it's going to discourage thinking about making a small 10-15% gain."

"I think there's a certain criteria for Ireland in particular now bringing in (players from overseas), because we produce so many good players.

"One of those criteria is that they have to be so much better than any like-for-like players that Ireland may have... Another criteria is that they're going to play lots of games, set culture and bring in new ideas and I'm all for that. We're in a position now where we've got so much home-grown talent and I think people coming in from overseas can add to that and make it better.

"The other criteria is that they're whiter than whiter than white when it comes to drugs and drug testing and, unfortunately, although the rules say that you get another chance and that's fine - but Ireland, Munster, Leinster, Ulster and Connacht don't have to be the ones to provide them with that chance and I don't think they should have."

"Whatever about Racing 92 signing him last season, do Munster not build their entire value system on honest endeavour?

"It’s what will remain unsaid in that changing room that would worry me as a former player.

"This smacks of hypocrisy. I’ll tell you why I believe that. For as long as I can remember, the IRFU have resisted even a hint of performance enhancing drugs creeping into the Irish rugby."

"The Munster professional board would have sanctioned the signing of Grobler, but that should never have happened. It sends out the wrong message to everyone in the organisation.

"The signing of Grobler sent the wrong message to those whose dreams are consumed on a daily basis by a desire to make it all the way to the top. It was shortsighted and unnecessary."

"It's important that we keep the game clean from an Irish rugby point of view, from a Munster point of view. It is something that needs to be talked about. As far as I'm concerned with GG, he made some bad decisions and he has done his time. He is here with us now as a Munster player and we will stand by him."

"He gets the backing of us as players. He completely accepts what he did, it was wrong, but does that mean he shouldn't play rugby again? I think that is crazy.

"It was the wrong decision, he was young and foolish. He paid the price for it. I think everyone deserves a second chance, he has learned from his mistakes."

Why does he get the backing of the Munster players when almost every other former player has said that he should be banned for life, or should have never been signed in the first place?

Because, what else can you say as a current player? Go against your employers? Slate a teammate in the week of a game he could play in?

Munster and the IRFU have allowed the players to look like mugs when it's ultimately Fitzgerald, Nucifora and Browne who should be taking responsibility.

Today two senior Ireland stars went on the record with their support of a drugs cheat and my timeline is still full of people up in arms over the timing of the issue coming up in the media instead of their employers for putting them in that position.

They gave the players no rail to lean on where they could say 'look, they addressed it yesterday, they said 'blank'. He's here now, and as long as he's here, he's one of our teammates'. At least give them that.

Munster and the IRFU have let two of their most high profile players take a fall here while they remained silent.

The ball has been dropped and the players had to pick it up when Munster and the IRFU should have never let it slip in the first place.

popular
Tyrone shoot the lights out with no fewer than 11 goals against Wexford
Danny Murphy's comments on BBC tonight prove some folks will never learn
"He looks the fool now" - Didi Hamann took exception to one magic Ronaldo moment
Cristiano Ronaldo is not human. Not human at all
An important moment in football history: Gareth Bale lets his hair down while playing for Wales
England and Scotland fans clash in incredibly underwhelming set of handbags
Thierry Henry schools Belgium players with perfect training ground free-kick
You may also like
4 months ago
Munster snatch defeat from the jaws of victory
8 months ago
Player in Munster's senior squad tests positive for Covid-19
1 year ago
'Be who you want to be, and give everything to the jersey' - The rise of Munster's new breed
1 year ago
Tadhg Beirne on the Wayne Pivac request that helped change his career
1 year ago
Pro14 Preview: Munster v Southern Kings
1 year ago
Connacht name strong 15 as Munster make 10 changes
Next Page