Ulster got a rude awakening at the Aviva Stadium.

If it were not for their inconsistent scrummaging and lineouts, Connacht could have put an even greater beating on Ulster.

The Westerners flaked previously unbeaten Ulster 36-11 to give their United Rugby Championship campaign a much-needed shot in the arm. Mack Hansen ran in two tries and there were other scores for Diarmaid Kilgallen, Niall Murray and a lovely one from John Porch.

END_OF_DOCUMENT_TOKEN_TO_BE_REPLACED

Ulster supporters that may have been cribbing about Billy Burns having two passes picked off - by Hansen and Kilgallen - for intercept tries is missing just how dominant the Connacht defence was.

The Connacht players knew that the best way to cut out Ulster's dangerous backline was to starve them of quality ball. Even if the passes were going wide, Ulster were often losing ground just getting there.

While Connacht made 573 metres off 117 carries, Ulster gained 276 off their 97 carries. When you are getting over the gainline like Connacht were, and making big line breaks, you're always going to prosper.

Conor Oliver and Dave Heffernan typified the doggedness of the Connacht forwards and how Ulster struggled to get front-foot ball. One moment, six minutes into the match, summed up the type of afternoon Connacht dished up and Ulster were forced to swallow.

Ulster start with a decent attacking platform on the halfway line and, with the set-piece solid, Nathan Doak found the man his was looking for - Stuart McCloskey. 'The Bangor Bulldozer' (circled) and Nick Timoney are the men to get Ulster over the gainline and put the opposition on their heels.

Conor Oliver was on red alert to this set-play - he was probably studying it in video analysis all week - and Dave Heffernan was there in support. The Ulster centre was driven back a few metres and Ulster were already reeling. 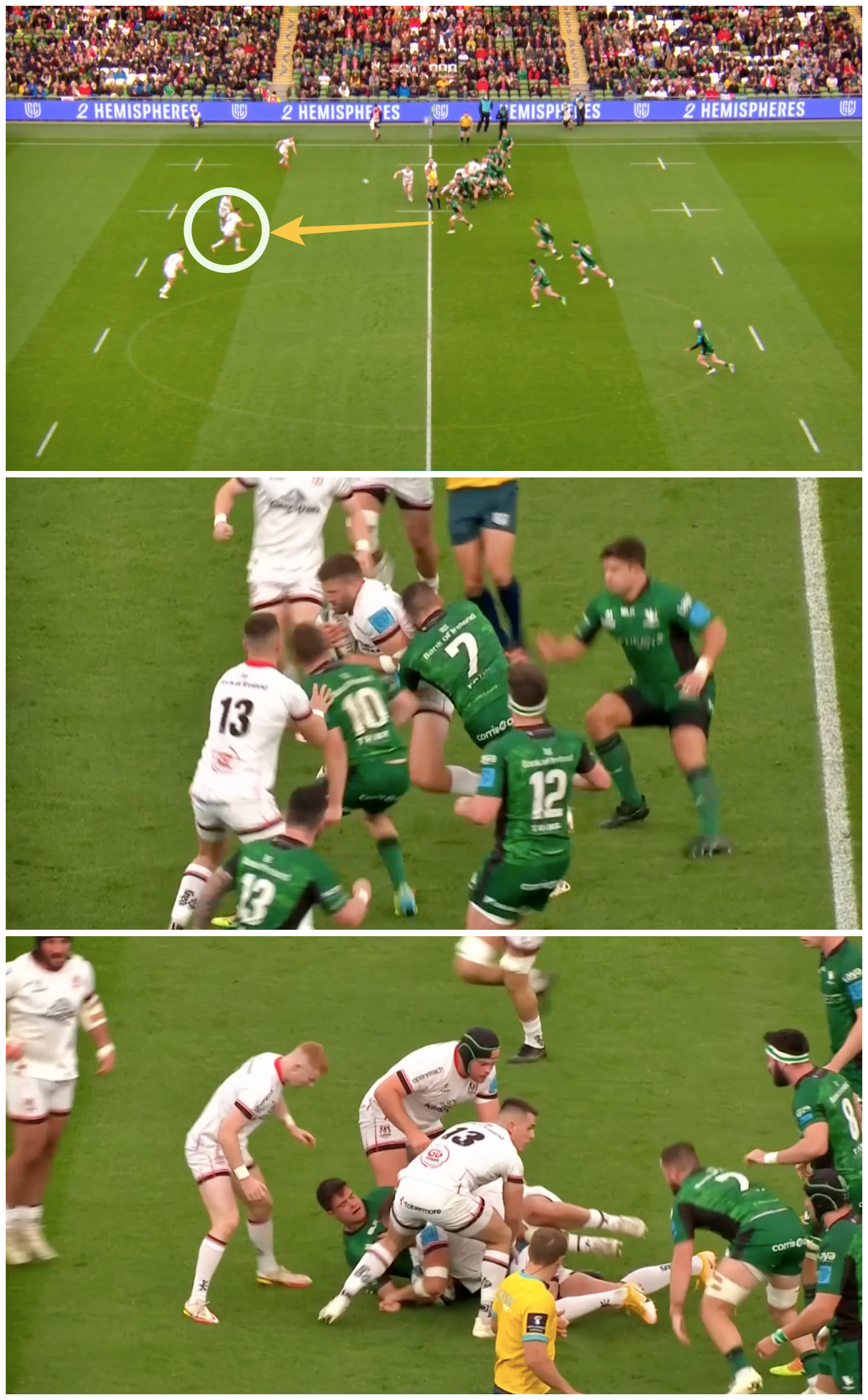 END_OF_DOCUMENT_TOKEN_TO_BE_REPLACED

Next up, Doak found Matty Rea for a carry as Ulster looked to regroup. The Ulster blindside was met by Finlay Bealham and Ultan Dillane. While not as emphatic as McCloskey's denial, but he still went backwards.

Connacht were now frothing. They knew they had Ulster in trouble.

Doak switched sides and found James Hume to his left. The Ulster centre evaded the diving tackle of Niall Murray and had No.8 David McCann hugging the left wing, in support. Even though they had driven Ulster back twice, that Hume run gave them a scoring chance.

Had Hume got a clean pass away to McCann, Ulster would be favourites to get a try. Doak was already running an inside support line and McCann would have just had the scrambling Heffernan to out-pace.

Jack Carty [right, below] was running over as cover but it mattered not. Marmion sunk a big tackle on Hume and, due to that, the pass to MccAnn went forward. 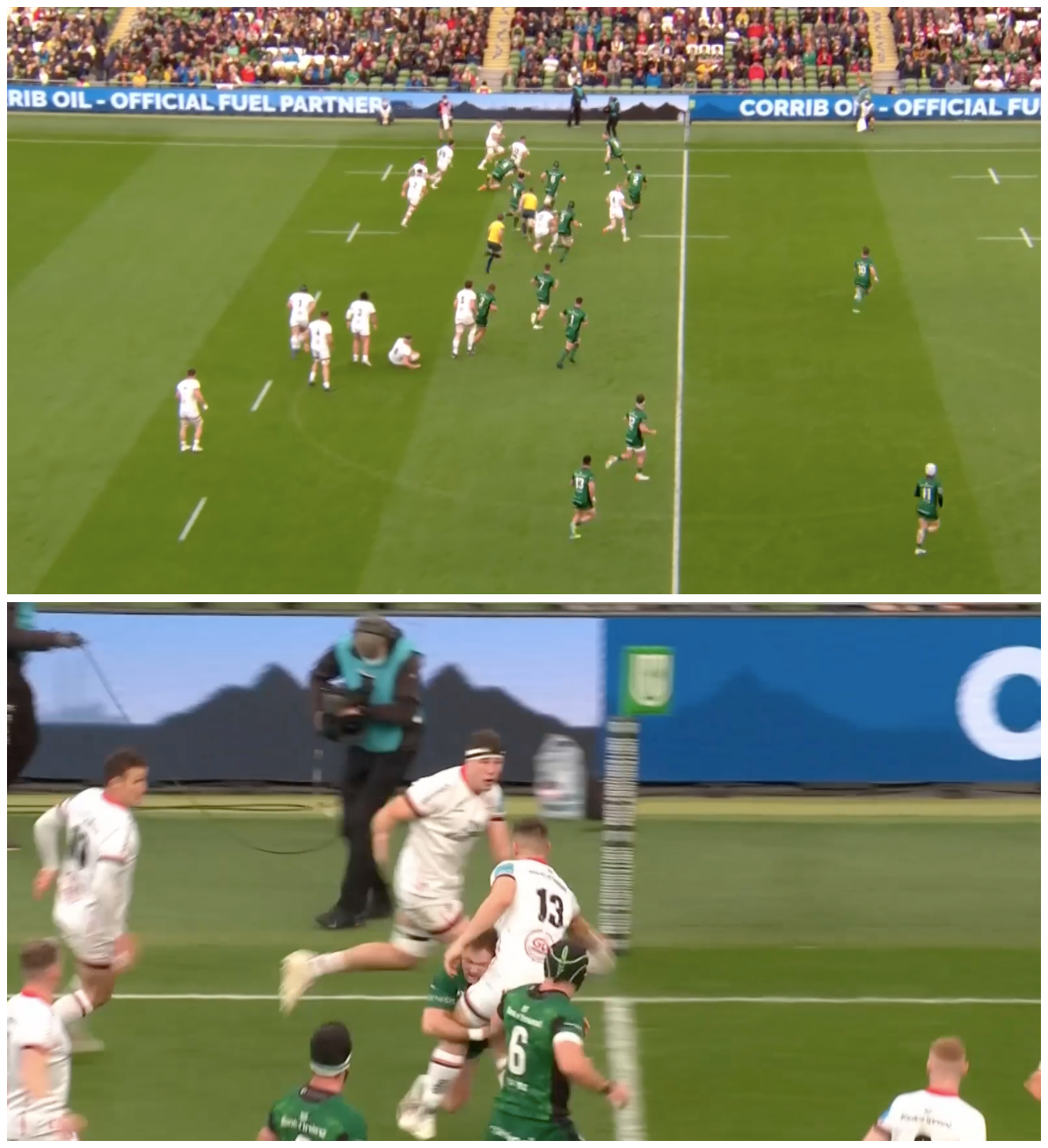 END_OF_DOCUMENT_TOKEN_TO_BE_REPLACED

The ball was lost forward and Connacht had another turnover secured. It was one of 15 Ulster turnovers conceded on a bad night in the office.

The full clip is below. Look for Oliver, who finished Man of the Match, leading the charge and the work-rate of all the Connacht forwards.

This 20-second sequence shows how dialled in the @connachtrugby lads were, last night 💪

Starts with McCloskey being driven back and (for Ulster) gets worse

Connacht fans will be hoping this will be the starting point for a more positive season, especially after winning only one of their first four games.

Andy Friend's side have Ospreys (home) and Leinster (away) next, following the Test window. The Australian will be looking to bottle that full-on performance for those games, leading into big Champions Cup dates in December.