"Split Leinster in two!" - Connacht stocking up with quality acquisitions

"I wouldn't be surprised if they put in a great performance against Leinster. That's Connacht, you know."

When they look back on the 2021/22 season, few at Connacht will remember their Friday night trip to Edinburgh with much fondness.

Andy Friend's side were leading the Scots 8-0 after 28 minutes, before the wheels came off in spectacular fashion. Eight tries - book-ended by a brace from Emiliano Boffelli - over the next 50 minutes saw them lose 56-8 to Mike Blair's side.

END_OF_DOCUMENT_TOKEN_TO_BE_REPLACED

The westerners have a couple of weeks without matches, and are next in action on March 26 against a side they will face over two legs, in April, in the Champions Cup Last 16 - Leinster.

On the latest House of Rugby URC [LISTEN from 14:25 below], Lindsay Peat, Greg O'Shea and Jason Hennessy were joined by Wasps and Ireland hooker Cliodhna Moloney. The quartet discussed Connacht's rollercoaster season, and their latest Leinster acquisitions. 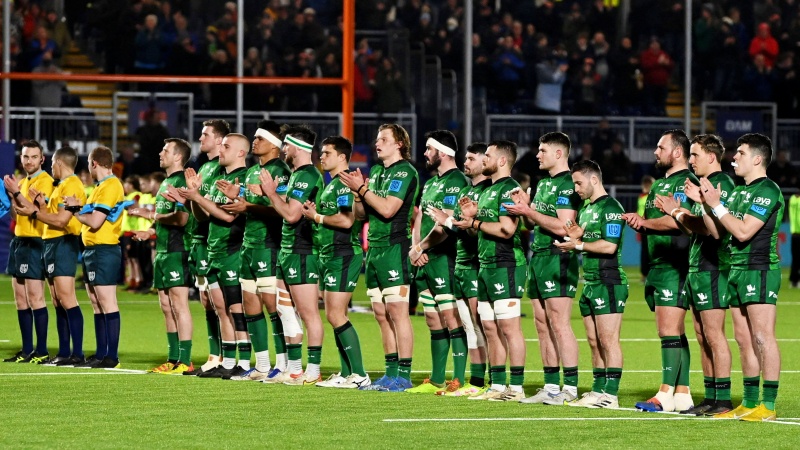 Both teams observe 30 seconds applause in solidarity with Ukraine before a United Rugby Championship match between Edinburgh and Connacht. (Photo by Paul Devlin/Sportsfile)

Go West, get game-time, make a name for yourself

END_OF_DOCUMENT_TOKEN_TO_BE_REPLACED

In recent seasons, Connacht have brought over a host of young players from Leinster, including Sam Illo, Jack Aungier, Gavin Thornbury, Greg McGrath and Oisín Dowling.

It has already been confirmed that Josh Murphy is heading to Connacht, from Leinster, next season. Several outlets reported, last week, that Adam Byrne and Peter Dooley were also set to head West.

"This talk of Dooley and Adam Byrne heading to Connacht is great," said Lindsay Peat, "and we can keep them in the country and won't lose them to clubs abroad. When players like Bundee Aki leave Connacht to link up with Ireland, they are losing that experience, insight and leadership.

"Hopefully, with some of these additions, we'll see a more consistent Connacht."

END_OF_DOCUMENT_TOKEN_TO_BE_REPLACED

Jason Hennessy says he was shocked to learn Byrne would be heading to Connacht. Leinster do have James Lowe, Jordan Larmour, Dave Kearney and three O'Briens [Jimmy, Conor and Tommy] that can play on the wing, but Larmour and Lowe are regulars in Ireland camps. Byrne may be moving West to make room for younger wings like Andrew Smith and Rob Russell.

"If you see all the Leinster players that have signed contracts in the past few weeks," said Peat, "how do you balance the books?"

Connacht have beaten Munster, Scarlets and Stormers this calendar year, but have shipped resounding defeats to Glasgow, Ulster and from that Edinburgh game. The panel spoke highly of Connacht coach Andy Friend, but consistency is the stick frequently used to beat them.

"We had Ross Byrne on recently and he was complimenting their back play," noted Greg O'Shea. "This is coming from a Leinster outhalf. He's saying, 'Connacht are good'."

There was praise for Dowling and Conor Oliver, who was previously in the Leinster academy but cut his professional teeth at Munster. The province is sourcing its own players, such as Niall Murray, Colm Reilly and Matthew Burke, but the IRFU has clearly given them the clearance to look at other provinces to add depth to their squad.