"The same stuff that's in the media is what I know."

On Saturday afternoon, Cliodhna Moloney had another fine game for Wasps as they defeated reigning champions Harlequins for the first time in Premier 15s history. Wasps did it in bonus point style, too.

On Sunday morning, Moloney hopped on a plane back to Ireland. The original plan, in her mind anyway, was to get home and see some family and friends before plunging into Six Nations camp with Ireland. As it stands, her country do not require her for a championship that will hopefully see signs of real progress after a tough 2021.

END_OF_DOCUMENT_TOKEN_TO_BE_REPLACED

Last week, Moloney - one of the country's best players - was left out of a 38-woman squad named by new Ireland coach Greg McWilliams. Asked about the omission of Moloney, on Friday, IRFU chief executive Kevin Potts said McWilliams had selected his squad based on form and in no way was the Galway native dropped due to past criticism of now-departed IRFU Director of Women's and Sevens, Anthony Eddy.

On the latest House of Rugby URC [LISTEN from 1:30 below], Cliodhna Moloney spoke of her devastation and disappointment of missing out on the latest squad, the departure of Anthony Eddy from the IRFU and the independent report into the women's team failing to qualify for this year's World Cup. 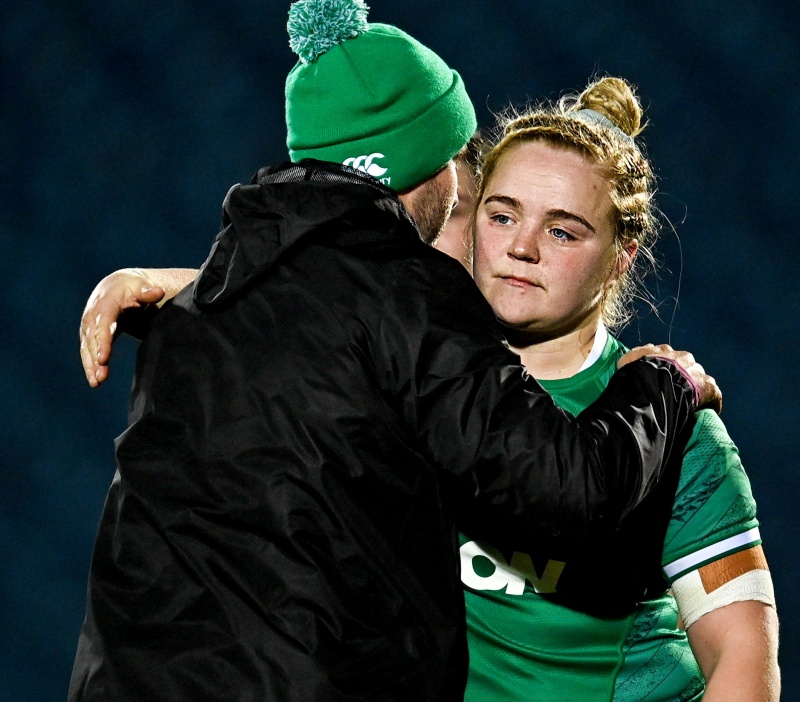 Cliodhna Moloney and former Ireland head coach Adam Griggs after a November 2021 clash with Japan at the RDS Arena. (Photo by Harry Murphy/Sportsfile)

END_OF_DOCUMENT_TOKEN_TO_BE_REPLACED

Capped 31 times for Ireland, the 2020 Ireland Women's Player of the Year and a force of nature when at her best, the decision to omit Cliodhna Moloney from that Greg McWilliams squad rightly made headlines and generated conversations.

The hooker was red-carded on Wasps duty, earlier this season, but has been back for several weeks now and looks in decent form. Former Leinster and Ireland prop Lindsay Peat, who was sitting in as House of Rugby co-host for the latest show, noted how well Moloney played in that Wasps bonus point win over Quins.

Asked for her take on missing out on that Ireland squad for the 2022 TikTok Six Nations, Moloney replied:

"I'm devastated. You always want to put your hand up to play for your national team.

"But it's a changing time, isn't it? We haven't qualified for this World Cup, it's a transitional time and we've got a new head coach in Greg McWilliams. I haven't actually been in camp at all yet, so I haven't had the pleasure of seeing how things have changed, how we're going to move on or what system we are going to play. Where I would or wouldn't fit into that, I couldn't say.

"But, yeah, disappointed not to get picked. I don't know too much about it, in terms of anything other than it is form. The same stuff that's in the media is what I know."

END_OF_DOCUMENT_TOKEN_TO_BE_REPLACED

Peat says she can see why McWilliams, who was part of the Ireland set-up when they reached the 2014 World Cup semi-finals, would be eager to blood new players in this Six Nations. However she added, "I'd personally have Cliodhna Moloney side-by-side with me, and in any squad."

"We do need to deepen our squad," said Peat, while noting that the Irish coaching team 'need to be honest' with the public about where that could see the team finish in a Six Nations that features five other teams that are all heading to the World Cup, later this year.

Asked if she had spoken with McWilliams, Moloney said, "Briefly." She added:

"As I said, I wasn't in camp so there has been no selection feedback or anything like that. Just that I wasn't selected, based off form. I don't know anything other than that. Hopefully I will get back in camp at some point in the future."

With the likes of Claire Molloy, Ciara Griffin and Lindsay Peat now retired from international rugby, and experienced players Sene Naoupu, Anna Caplice and Moloney all left out of the latest squad, there is a serious dearth of women in the squad that have been there, done it and secured big Irish wins.

Eimear Considene (23 caps) and Nichola Fryday (22) are now the most experienced players in the current Ireland squad, with no other player in there with over 18 caps.