If found guilty Etienne Falgoux could face a significant ban.

Ulster's brave second-half comeback was a case of too little too late as they fell to a 38-19 defeat to Clermont Auvergne in the Round 4 Champions Cup clash at Stade Marcel-Michelin.

One incident which seemed to go unnoticed during that game was an alleged eye gouge by Clermont's Falgoux on Ulster's Luke Marshall.

The incident occurred during the 31st minute of the match.

The first few seconds of the video above show the seemingly unsavoury act for which the player has since been cited.

Marshall goes in to tackle the player who has just fielded a high ball.

Falgoux then removes Marshall from the ensuing ruck but does so with his arm around the Ulsterman's neck and face in the process.

It is difficult to determine whether contact is made with Marshall's eyes but the player was definitely bothered by the challenge as you can see in the footage above. 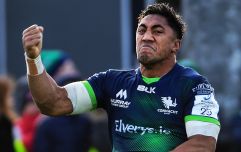 END_OF_DOCUMENT_TOKEN_TO_BE_REPLACED

Above is a screenshot of the immediate aftermath of the incident.

Marshall takes his time getting up from the turf and can also be seen bringing his hand towards his face.

We can't imagine Marshall would be the type of player who would feign an injury such as this so it will be interesting to see what the outcome of tomorrow's hearing will be.

You can see a full description of the EPCR's citation below. 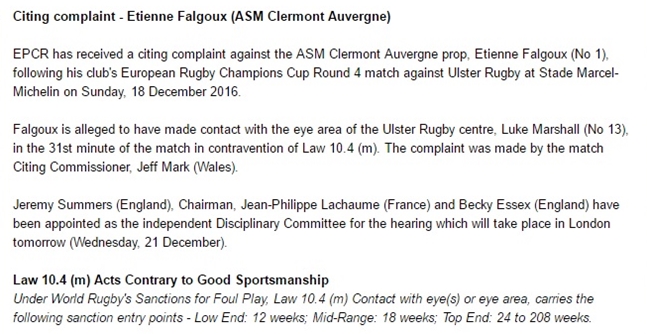