Backing away from the scene of another turnover, CJ Stander squared his shoulders and exhaled. He looked every inch the pack leader.

16 carries and 10 tackles are creditable numbers for most players but, for CJ Stander, it is a return that is just around par. A usual day at the office. Five turnovers, though... that is some going.

Ahead of rugby's return, in Ireland, Munster head coach Johann van Graan observed, "The role of the jackler is going to be massive... you've got to make sure that you get jacklers into your team."

World Rugby wants quick ball from attacking rucks and so do most teams. A defending team that can slow that ball down, then, will be benefitting from turnovers and penalties going in their favour. Stander has taken to this challenge fantastically well. Even before the six-month break in the season, he was becoming more and more of a nuisance at the breakdown.

On Saturday, behind the closed doors of the Aviva Stadium, Munster's No.8 made hay. Aside from a few bruising carries - one of them skittling Johnny Sexton - Stander was our man-of-the-match candidate for his jackaling masterclass. He made one turnover early on and won his side a penalty, which JJ Hanrahan converted, later in the half. Three more turnovers were secured after the break. 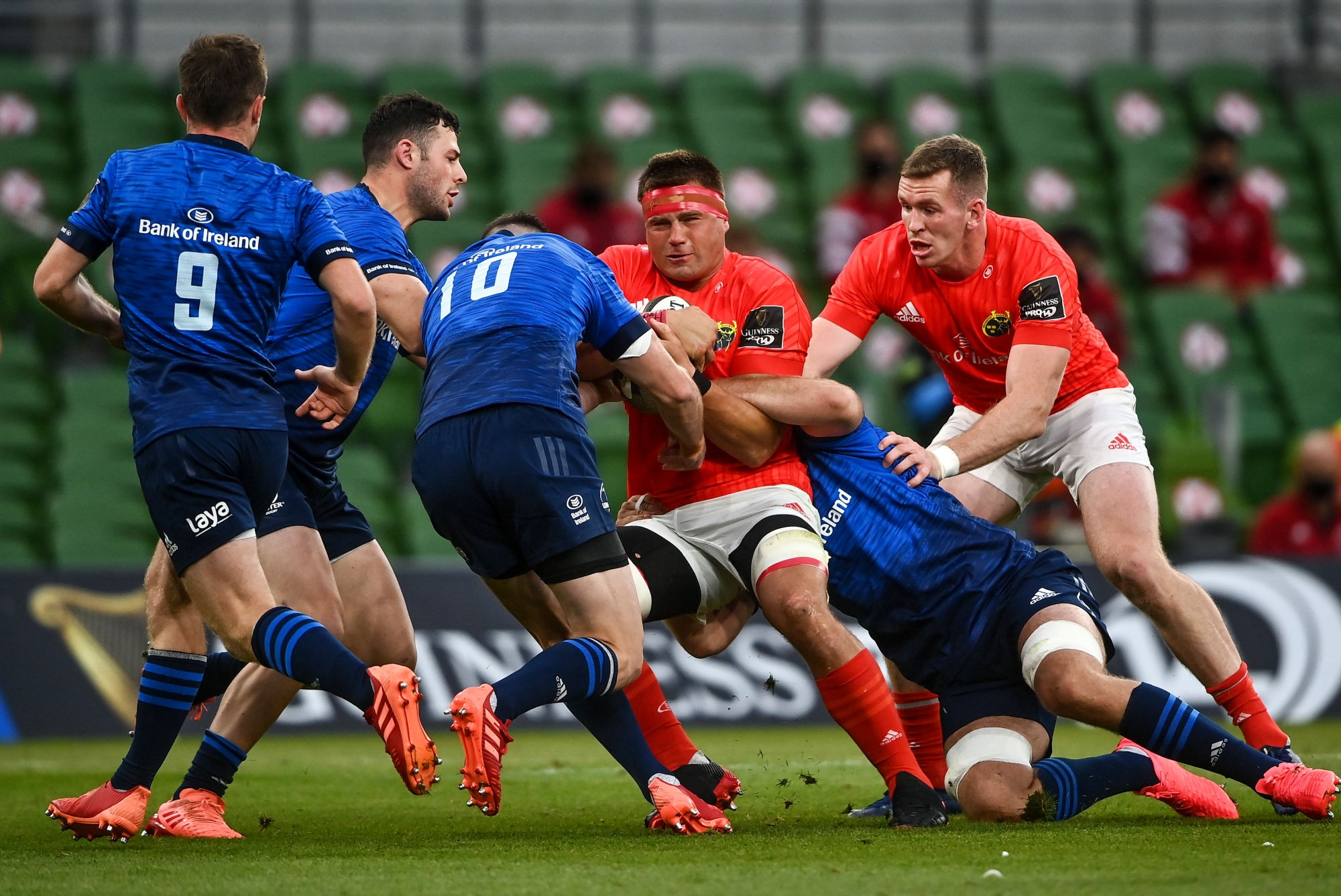 CJ Stander is tackled by Jonathan Sexton of during the Guinness PRO14 match between Leinster and Munster at the Aviva Stadium. (Photo by David Fitzgerald/Sportsfile)

Leinster went with Scott Fardy and Ryan Baird in the second row with a back row unit of Caelan Doris, Josh van der Flier and Jack Conan. An attacking quintet but lacking a ground-hog like Dan Leavy or Will Connors. Van der Flier was Leinster's stand-out forward in his side's 27-25 victory but Stander was the most influential player on show.

Stander made may but Leinster coach Robin McBryde notes that Munster committed heavy numbers to the breakdown, to assist his poach and turnover attempts. McBryde believes referee Andrew Brace may have been too stringent on the breakdown, last Saturday, but with reason.

END_OF_DOCUMENT_TOKEN_TO_BE_REPLACED

Munster can secure their semi-final slot on Sunday with a positive result [or by picking up some points, at least] against Connacht. If so, they will meet Leinster, again, at the Aviva Stadium on September 5. Asked how Leinster would try get a handle on Stander should the two sides meet again this season, McBryde says:

"The breakdown battle is very important. Munster really committed a lot of numbers to the breakdown and made a bit of a mess of it. We weren't really able to get our flow, from an attacking point of view, into the game.

"That was aligned, too, with the referee's interpretations of the game, which we've got to get used to. I'm not being critical of the referee because he was playing his first game in six months - the same as everyone else was.

"And as we saw with the Super Rugby, in New Zealand in particular, for the first couple of rounds there was certainly a bit of bedding in, from a players' and refereeing point of view. Because of those decisions being a little bit harsher in those opening rounds, the remainder of the competition was played at a very high level. It's because they were pretty harsh in those opening rounds.

"There's going to be a little bit of a bedding down process and everyone getting to understand the referee's interpretations. But the nature of the game against Munster, we knew that they were going to be pretty physical at the breakdown and contact area. That's one area we need to improve on."

Leinster are set to make several changes to their matchday 23 for their Saturday evening game against Ulster. They have a guaranteed home semi-final on September 5 and then Saracens in the Champions Cup, in late September.

For Munster, the all or nothing games are upon them. Stander will be back at it against Connacht on Sunday and it will be interesting to see if Andy Friend and his players have any plans to negate the forward's growing influence in a crucial area of the game.

popular
Referee Mathieu Raynal puts Sexton in his place after TMO mess
Robbie Henshaw one of three Irish players deserving of Lions Test XV
Jamie Redknapp's face after going toe-to-toe with Roy Keane as Matt Doherty caught in the crossfire
QUIZ: How well do you know Manchester United players of the 2010s?
Ellis Genge reveals death threats received after England's loss to Wales
Tadhg Beirne now delivering what so many of us knew he was capable of
The SportsJOE 12 o'clock quiz | Day 308
You may also like
1 month ago
Munster snatch defeat from the jaws of victory
1 month ago
Munster secure victory after thrilling Connacht comeback in Galway
1 month ago
"It’s a jersey that I’d never swap or give away for no amount of money" - Ian Keatley
2 months ago
Danny Care accuses Munster players of 'rolling around and diving'
2 months ago
"It's something I have been pushing towards since I was very young" - Shane Daly
3 months ago
"It was rock bottom... I was going to pack my bags and start farming" - CJ Stander
Next Page