"We do all the hard work and they get all of the glory, that’s why they are here."

CJ Stander made the post-match comments then cracked a wide grin.

Having assumed the captaincy duties when Peter O'Mahony's rib injury forced him off, Stander followed that up by facing the press in the bowels of Gloucester's Kingsholm Stadium. He spoke of Munster letting themselves down in their away loss to Castres. Friday night in England was another stride in the right direction.

Exeter Chiefs will visit Thomond Park next weekend and another win will see them top their pool. They may need to get the bonus point if they want a home quarter-final. Off the back of their past three games - convincing wins over Leinster, Connacht and Gloucester - that should not be beyond them.

Munster's key to success was their strong, direct ball-carrying. Although Gloucester stuck 88% of their tackle attempts (142 from 161 attempted), Munster had close to 70% gainline success, meaning the hosts' defence were on the back-foot for much of the game.

The first half tries for Joey Carbery and Rory Scannell were teed up by the Munster pack, and centres, gaining ground on just about every relentless phase.

No need to go round them if you can go thru them!!

The first 10 minutes of the second half were tough going for Johann van Graan's men. Carbery, with perhaps his only blemish on another impressive night, didn't make the Gloucester 10-metre line with his kick-off. Munster then lost the scrum and, soon after, lost captain O'Mahony.

Gloucester piled into Munster and, after 36 phases over four minutes of ball-in-play, they scored through Ollie Thorley. Post-match, van Graan said it was that stern defensive stint, with Munster repelling Gloucester time and again until they were eventually breached, that helped spur them on.

END_OF_DOCUMENT_TOKEN_TO_BE_REPLACED

Two minutes after that Thorley score, referee Romain Poite gave Conor Murray permission to snap off his leash. Gloucester scrum-half Callum Braley rolled the ball back from a ruck in his 22 and was about to make a clearing kick when Murray, rushing around the man at pillar, tackled and dragged his opposite number to the deck. Munster got the scrum and it was in prime position for an attacking set-play.

Watching the game at the ground or on TV, it was obvious what was coming. Munster's scrum just needed to stay strong, keep the Gloucester pack invested and leave the rest to CJ Stander. The Munster No.8 (circled red) was already eyeing up Gloucester 10 Danny Cipriani (circled below). Keep an eye out for Keith Earls on the left wing too. 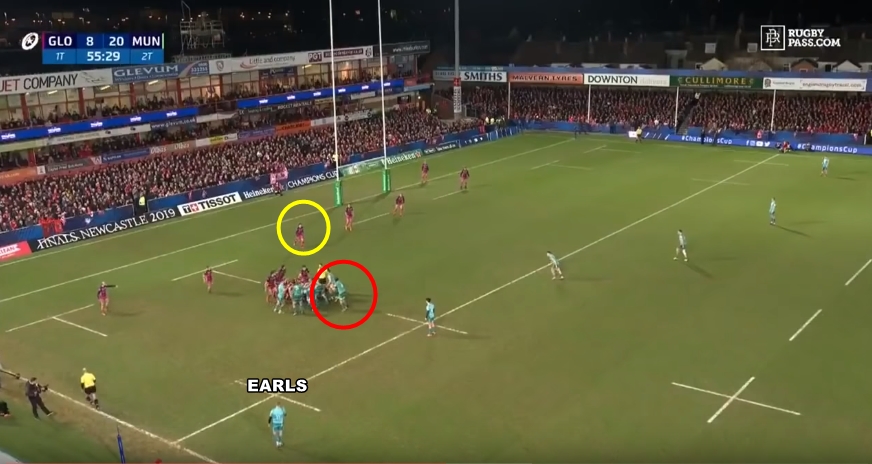 As it turned out, Gloucester were pinged for early engagement but Murray was thinking fast. He tossed the ball to Stander for a quick-tap penalty and the move was back on.

Stander made a beeline for Cipriani and drove him back a few metres, drawing in Gloucester's Lewis Ludlow and Mark Atkinson to try and hold him up. Rory Scannell and Tommy O'Donnell piled in to drive home the  front-foot advantage.

Jean Kleyn was up next and he made another strong carry, getting Munster up to the five-metre line. Stander and O'Donnell were back up and ran convincing dummies as Conor Murray switched from a sweep from the right corner back to the left.

Rory Scannell took the pass at pace but was held up as he backed himself for a dart at the tryline, despite Earls pleading for the pass. Again, crucially, Scannell got over the gainline. Stander and O'Donnell were there to clear-out, and drive defenders back.

END_OF_DOCUMENT_TOKEN_TO_BE_REPLACED

Forwards Stephen Archer and Billy Holland busted a gut to get out to the left flank and Murray. Archer tied up one defender and Holland, who took the pass, the other. That left Earls free but Holland still needed to get his pass away under serious pressure. He did, and in some style too.

Carbery nailed the touchline conversion and Munster were 27-8 ahead with just over 20 minutes to go. That was essentially the winning of the match. The bonus point try (Andrew Conway) and a fifth team try for Carbery sealed the contest and strengthened Munster's grip atop their pool.

Following his side's 41-15 defeat, Cipriani - the target of that Munster set-play - acknowledged just how good the Irish province were.

Well played @Munsterrugby - precision all round 👏🏽

The victory over Gloucester only goes to show how dangerous this first-choice Munster XV is. If they can keep as many frontliners fit as possible, they deserve to be in the conversation about teams best set to challenge cup holders Leinster.


popular
The SportsJOE 12 o'clock quiz | Day 294
"If Munster hadn't given him a contract, I'd say Leinster would have gone after him"
Cristiano Ronaldo facing laughable fine having broken Covid rules for Ski trip
Conor McGregor wants immediate Dustin Poirier rematch, for UFC title
QUIZ: Name the missing player from the All-Ireland final team sheets
QUIZ: Name every Chelsea manager hired by Roman Abramovich
The SportsJOE 12 o'clock quiz | Day 293
You may also like
4 weeks ago
"It’s a jersey that I’d never swap or give away for no amount of money" - Ian Keatley
1 month ago
Danny Care accuses Munster players of 'rolling around and diving'
1 month ago
"It's something I have been pushing towards since I was very young" - Shane Daly
2 months ago
"It was rock bottom... I was going to pack my bags and start farming" - CJ Stander
2 months ago
"I could feel that connection at Soldier Field. Axel was there, 100%" - CJ Stander
2 months ago
"There is no doubting Baird is a future Irish second row, long-term" - Paul O'Connell
Next Page