"I wouldn't change my journey now for anything in the world."

It is just over two years since Cian Prendergast was back home, near Kildare's Curragh expanse, when he was told by Noel McNamara that he had missed out out on an academy spot with Leinster.

In the days and months that followed, the young flanker has done everything to prove himself a poster boy for second chances in rugby.

END_OF_DOCUMENT_TOKEN_TO_BE_REPLACED

He headed West, impressed at Connacht and made his senior debut six months after that devastating phone call. 18 months on, again, and the 22-year-old was named as one of five uncapped players heading with Ireland to New Zealand.

On House of Rugby URC [LISTEN from 25:30 below], Greg O'Shea, Lindsay Peat and Jason Hennessy discussed some of the big selection calls from that Ireland squad, while Cian Prendergast spoke about his rugby journey so far. 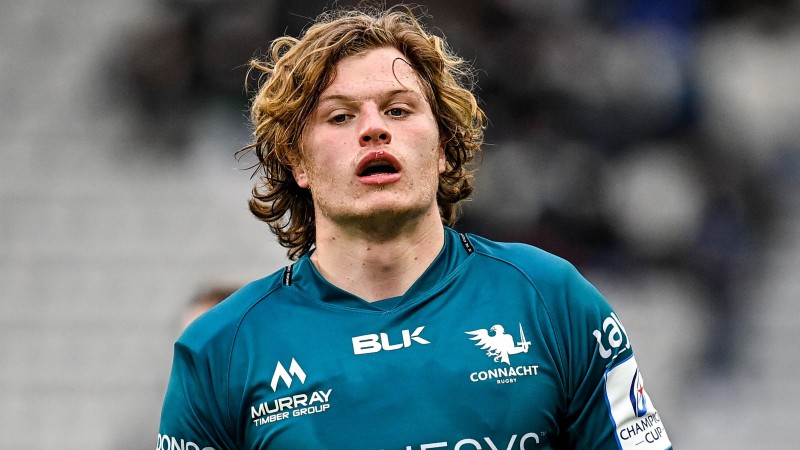 'Cian Prendergast didn't give up on his career'

END_OF_DOCUMENT_TOKEN_TO_BE_REPLACED

After initially fancying himself as 'the next Johnny Sexton', Cian Prendergast was encouraged to try out the second- or back-row after a teenage growth spurt, one summer, that saw him stretch from 5' 10" to 6' 4".

He made strides with Newbridge College and was in the Leinster underage set-up but, even though he had Ireland U20 caps to his name, fell victim to the province's steady production line of young, quality flankers. Two years on, he can still remember the day he found the door at Leinster would be closed to him.

"I got a phone call off Noel McNamara during lockdown, around April 2020. It was like, 'Listen, we don't have a place for you'. The world came crashing down around me, at that time. I didn't know what I was going to do.

"About 24, 36 hours later, I get a phone call from Eric Elwood [Connacht academy manager] and he was like, 'We'd like to offer you a place in the Connacht academy'. I'll be forever grateful for that, because it was a second chance for me. I remember having conversations with lads, at the time, who had got academy offers for Leinster. I was very jealous but, look, I wouldn't change my journey now for anything in the world."

END_OF_DOCUMENT_TOKEN_TO_BE_REPLACED

Prendergast made 10 appearances for Connacht in his first season, was bumped up to an improved deal and then logged a 2021/22 season - 21 games, four tries, multiples man-of-the-match awards - that saw him win a three-year senior contract and the 'Nevin Spence Best Young Player' accolade at the Rugby Players Ireland awards.

On his Ireland call-up, all at House of Rugby expressed their eagerness to see Cian Prendergast get some decent minutes down in New Zealand. For Jason Hennessy, the Connacht flanker will start against the Maori All Blacks, and be an outside bet bench option for the Test Series.

"He seems like such a nice, young guy. He's been through a lot, already, but didn't give up on his career and, YES, you are going to New Zealand!"

"The fact that we have the Maori games," he added, "Cian is guaranteed to start the two of them. Without a doubt, he'll at least start those games. It's great that we're having his old-fashioned tour, which gives guys a chance."

"I'm delighted for him," said Lindsay Peat, as she likened him to Tadhg Beirne. "He's been a stand-out for Connacht and a stand-out for Irish rugby. We've talked for weeks about rewarding players and, for me, he's one that needs to be rewarded. He's got his opportunity now and I hope he takes it."

Greg O'Shea added, "He's literally personified that statement - Be so good that you can't be ignored. He's been so consistent; so many man-of-the-matches, playing out at The Sportsground. He's only young, as well, but it's great to see Andy Farrell going, 'Yep, he's good. Let's get him in'."


popular
Roy Keane cracked up Ian Wright and Gary Neville with England team spirit remark
'I was so stressed the week before the All-Ireland and I ended up having a panic-attack' - O'Shea and O'Sullivan open up
Roy Keane shoots down ITV presenter's 'excuse' for England's draw with USA
World Cup 2022 Day Seven: All the major action and talking points
The nine England World Cup footballers who could have played for Ireland
The confirmed World Cup pundits for RTE, ITV and BBC have been released
'Just a bit of PR' - Roy Keane and Ian Wright have their final say on OneLove armband U-turn
You may also like
22 hours ago
Former England international admits he wishes he had played for Ireland
5 days ago
Two baffling omissions as four Ireland stars make World Rugby 'Dream Team' of the Year
5 days ago
Josh van der Flier claims World Rugby Player of the Year at Monaco ceremony
5 days ago
"Highlight of my Ireland career" - Behind the scenes as Jack Crowley and Ross Byrne covered for a legend
6 days ago
Bundee Aki reminded us all of his best qualities, on a night Ireland couldn't do without him
6 days ago
Peter O'Mahony delivered some fitting Jack Crowley comments after surprise Test start
Next Page