"It could have been a landslide."

Andy Farrell insisted, after his side's 32-17 defeat to the Maori All Blacks, that he was proud of his new-look side's second have showing. The loss could still be a speed-bump, but injuries to Cian Healy, James Hume and others are very worrying.

Niall Scannell has already been called up as cover for Rob Herring and Iain Henderson [knee] is heading home. Mack Hansen [Covid] is isolating for seven days. On Wednesday night, in Hamilton, Healy, Hume, Jimmy O'Brien and Jeremy Loughman all got added to the 'doubtful' or 'EXTREMELY DOUBTFUL' list.

The biggest worries are Cian Healy and James Hume, though. Both looked in considerable distress, leaving the field of play, and Andy Farrell later said the Leinster prop 'does not look good'. 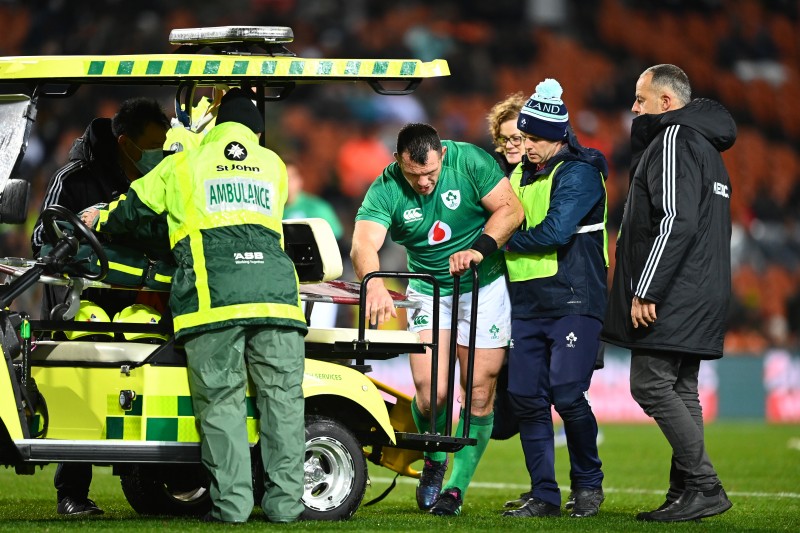 Cian Healy leaves the field injured during the match between the Maori All Blacks and Ireland at FMG Stadium. (Photo by Hannah Peters/Getty Images)
Advertisement

END_OF_DOCUMENT_TOKEN_TO_BE_REPLACED

Having replaced Jeremy Loughman, who went for a Head Injury Assessment and passed it [despite worrying TV footage], after 90 seconds and then at half-time, Cian Healy was kept busy.

Midway through the second half, though, Healy's leg was caught in a heap when he was tackled and a medical cart was called on to help him off. James Hume received treatment on a couple of occasions, in the match, but two medics needed to help him off the pitch.

As he slowly made his way to the sidelines, a flushed Hume declared, "F*** me!" It was an exclamation that easily summed up Ireland's performance and injuries.

Andy Farrell tried his best to offer a pragmatic 'it is what it is' approach to his post-match press conference, but he must be wondering if he crossed under some Kiwi ladders in the past few days. He commented:

"Cian Healy does not look too good… he was in a bit of pain coming off the field. It has settled down a bit, so we will have to see with him... James Hume has a bit of a groin injury that needs assessment tomorrow."

END_OF_DOCUMENT_TOKEN_TO_BE_REPLACED

On the other lads that took big blows and looked in difficulty, Farrell said, "Jimmy [O’Brien] came off with a strain. He thinks it is a strain, but he’s feeling pretty good in the changing rooms.

"A few lads were struggling with cramp at the end there, it was a tough old game, especially for the forwards."

Asked if Jeremy Loughman, who returned to play after 12 minutes but went off again at half-time, had failed his Head Injury Assessment, Farrell said, "He actually passed his HIA with an independent doctor. We brought him off as a precaution."