"He's not dirty in the slightest, but it was red" - Darren Cave on Chris Farrell tackle

"Thumping contact. We could almost hear it up here."

One often hears about how Player X or Player Y is 'the nicest guy' in a particular sport, but Chris Farrell would put most to shame. The big Fivemiletown native is one of the most humble and sincere rugby players out there.

Nobody would deny that claim for a second, but there would be surely more disagreements over the bruising hit he made on Tom Farrell at The Sportsground, on Saturday night.

END_OF_DOCUMENT_TOKEN_TO_BE_REPLACED

The Munster centre burst out of the defensive line to force the issue with Tom Farrell, who had just come on as a Connacht replacement. He was looking to make a big hit to help out his team, but went too high and there was a glancing head clash between the Farrells.

On the latest House of Rugby URC episode [LISTEN from 34:15 below], Darren Cave discussed Connacht's win over Munster with hosts Jason Hennessy and Greg O'Shea, and covered that controversial Farrell tackle. 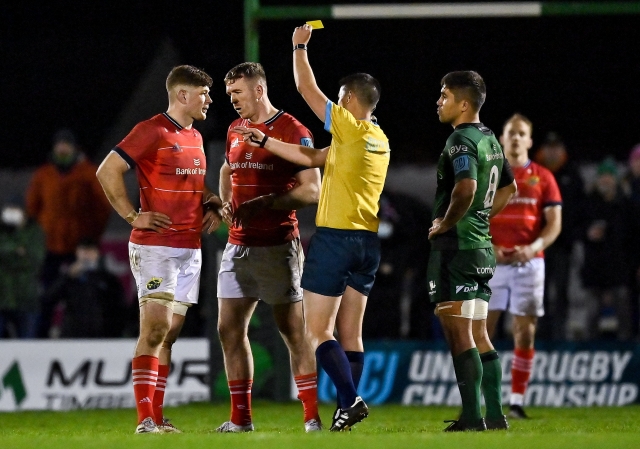 Chris Farrell of Munster, second from left, is shown a yellow card by referee Chris Busby during the United Rugby Championship match against Connacht at The Sportsground in Galway. (Photo by Brendan Moran/Sportsfile)

END_OF_DOCUMENT_TOKEN_TO_BE_REPLACED

Referee Chris Busby was called to review the Farrell-on-Farrell incident, by the Television Match Official, but appeared set on just issuing a yellow card. He spoke of the mitigation of Tom Farrell's slight step, but most viewers recognised the Munster 13 was fortunate to just see yellow.

"I do think Busby is a good ref," says Greg O'Shea, "but you could see he may have been looking [for a reason] not to show the red card, in a local derby."

"For me," Darren Cave states, "I feel like I'm banging the same drum, every time I talk about this, but I don't like to see head-on-head [collisions].

"Chris Farrell is a former [Ulster] teammate of mine, he's a lovely guy and a class player. He's not dirty in the slightest but, for me, you can't be touching heads... if people are clashing heads because the tackler is entering the tackle zone too high, I just think it's a red card.

"Head-on-head causes serious injuries. Just tackler lower. I don't like to see head-on-head collisions like that. I think it's really dangerous and I'd just like to see them out of the game."

"Massive tackle coming in from Farrell... thumping contact. We could almost hear it up here" 💥 💥

Chris Farrell went to the sin-bin for this, but many Connacht fans felt it was a clear red

Connacht took advantage of Chris Farrell being in the sin-bin as they scored from a driving maul, not long after he went to the sideline. That put them 10-8 clear and they held out for an important victory.

It remains to be seen if any citings will follow that Connacht vs. Munster game, which saw another two players [Ben Healy and Shane Delahunt] sin-binned for a half-time fracas along the sideline.