"Hello, Bristol Bears! How can I help you?"

It is just after 1pm on team photo-shoot day, at Bristol Bears, and the senior squad are in a giddy mood. Callum Sheedy and AJ MacGinty share a joke while Pat Lam directs operations and gets his squad organised far quicker than the photographer could have hoped.

A phone rings in the main reception of the Bears' High Performance Centre and, with the desk temporarily unmanned, Semi Radrada wanders by and takes the call.

END_OF_DOCUMENT_TOKEN_TO_BE_REPLACED

We are here for our 'A Season With... ' series, which will get a behind-the-scenes look at Bristol Bears and European champions La Rochelle, this season.

A sign at the gate of the HPC reads 'You are now entering Bear Country', before the road winds up to the slickest-looking rugby base I have ever seen. The centre opened in 2020 and offers the players two full-size pitches, a fully covered pitch that is half the size of the club's Ashton Gate home pitch, an expansive gym and analysis room and a canteen with a great vista on sunny days.

On this day, though, it is grey and mizzling. Still, the spirits are high. Bristol opened up their Gallagher Premiership season with a 31-29 victory over their West Country rivals, Bath. Ellis Genge has returned to his hometown club, from Leicester Tigers, and blazed in two tries in that Bears victory.

"That game, first of the season, is huge," says forwards coach John Muldoon. "I'm sure Bath are sick of us, at this point. We've gotten one-up on them for the last couple of years, on the first day."

AJ MacGinty teams back up with Pat Lam

On the slate, during our first visit of the season to the Bristol Bears' HPC, are chats with John Muldoon, the former Connacht captain, and players Callum Sheedy, AJ MacGinty and Chris Vui.

END_OF_DOCUMENT_TOKEN_TO_BE_REPLACED

Vui, who is from West Auckland but a Samoan international, ambles over to the far corner of the indoor pitch and is grateful when he is offered a tackle bag to sit on. He is heading into his sixth season with the club, was part of their promotion back to the Premiership in 2018, and ranks their 2020 Challenge Cup win over Toulon as his Bears highlight, to date.

"We're like a family here and everybody has each other's backs. Very close-knit. Any of the new guys that come in, we try get them settled in as quick as possible. Get them out for a coffee, show them what's what."

Irish outhalf AJ MacGinty is one of the new guys at Bristol, having moved from Sale Sharks over the summer. After he helped Connacht to the PRO12 title, in 2016, Pat Lam told the Dubliner, who is a USA international, that he would always have a place for him in one of his squads. Six seasons later and Lam kept his word, bringing MacGinty in to challenge Sheedy, Tom Wilstead and Sam Worsely.

"Those six years have flown by," he tells us. "I'm still finding my feet here, at the moment - straight into pre-season, getting the family settled in and getting to know the lads... I'm sure there will be a bus journey, heading back from an away game, to help with the initiations and team bonding!" 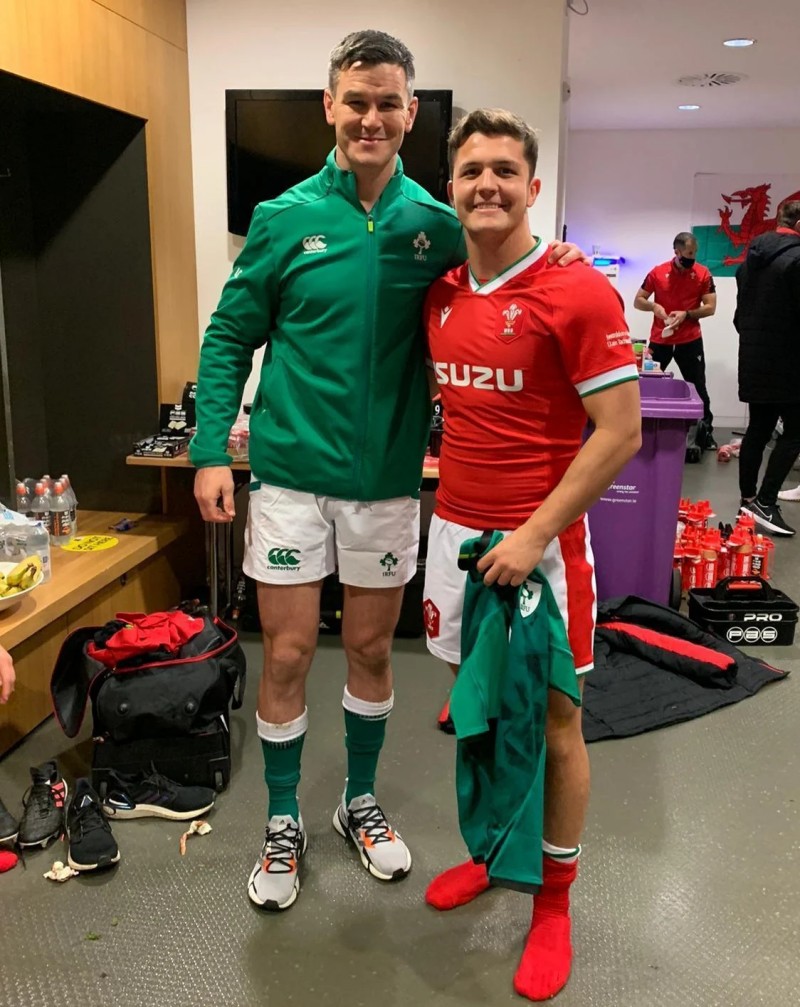 The No.10 jersey looks set to be tugged at by both AJ MacGinty and Callum Sheedy, this season, while 18-year-old outhalf Sam Worsley has been tipped to get a few senior outings, over the course of the campaign.

Sheedy has been with Bristol since 2014 and, after some loan spells away to get senior rugby experience, he really kicked on from 2017 and has already contributed over 1,000 points to the Bristol Bears cause.

Despite being born and raised in Cardiff, Sheedy did play some underage rugby with Ireland as he qualified through his father hailing from Kildare. "Dad is a very proud Irishman," Sheedy tells us, "and when I was growing up, he was all Ireland, Ireland, Ireland. Mum is from Wales, so are all my friends, and I was born there, so that was my decision made. But I'm still very proud of my Irish links, and have gone back to Kildare a good few times, over the years."

In November 2020, as fate would have it, Sheedy made his Test debut for Wales against Ireland. The Bears outhalf came off the bench in a 32-9 loss to Andy Farrell's side, but was heartened by a post-match visit to the Wales dressing room from a player he has always looked up to - Johnny Sexton.

"Oh it was amazing," Sheedy recalls. "It was incredible. It was my first cap and Johnny came over to give me his shirt.

"I was like a fan-boy, to be honest. I was asking him to get in a picture with me. To be fair to Johnny, he still keeps in contact with me now and he seems like an absolute legend of a bloke.

"He's someone I have looked up to for years, and just to get a message, out of the blue, to see how things are going... he's a role model. We're both professionals, as well, but I still look up to him, massively."

As the Wales international speaks about 'buying into the team culture', Kyle Sinckler - not wanting to spoil the shot - comes through and sneaks behind the camera, whispering an apology as he heads back out to the bottom pitch.

Before Sheedy scoots off to get changed out of his gear and get on with the rest of his day, we run through some quick 'throw your teammates under the bus' questions. The theme is 'Most likely to... '

The players from the men's senior squad are all heading away for the day, but there will only be a lull for about an hour - the U18s and several of the women's squad are due in around 4pm and the HPC will be abuzz again.

Wasps are next up and, with Callum Sheedy bagging a try in an 18-point haul, Bristol will go two for two in the league.

Right now, in Bear Country in the West Country, things are looking up