"It’s a moment that we’ve dreamed of as children... and big children."

So said Connacht captain John Muldoon on the eve of his side's first final in 132 years – the Guinness PRO12 final.

This evening, in the early summer sun of Edinburgh, Muldoon and Connacht claimed the league after playing Leinster off the park. They won 20-10 and won in style. There could be no complaints from the beaten Leinster side.

END_OF_DOCUMENT_TOKEN_TO_BE_REPLACED

Connacht played in the image of their head coach Pat Lam and his innovative, daring staff. They believed in themselves and took the game to Irish rugby's most successful province from the start.

It was a joy to watch. Did we ever truly believe an Irish side could play such running rugby, peppered with offloads and full of players who backed themselves to outstrip their man? 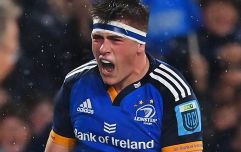 END_OF_DOCUMENT_TOKEN_TO_BE_REPLACED

Leinster looked to have Connacht where they wanted them in the opening stages. The game was being played at a frantic pace and Leinster backed their fitness levels – built through Test and Champions Cup rugby - to outlast their neighbours.

Connacht were more than happy to shoot from the hips.

Matt Healy's break gobbled up ground in no time and left Tiernan O'Halloran with a one-on-one that left Rob Kearney on his arse and swept Connacht into the lead.

Connacht proved it was no fluke, 25 minutes in, when Niyi Adeolokun finished off a superb team move. He controlled his own chip over the top and touched down for a sensational score. AJ MacGinty's penalty, soon after, left it 15-0 at the break. 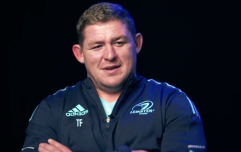 END_OF_DOCUMENT_TOKEN_TO_BE_REPLACED

Leinster got off the mark after 43 minutes when Johnny Sexton knocked over a penalty but that was all they got until the final quarter.

Connacht would not be cowed and stayed true to themselves - keeping the ball alive, offloading and taking cuts. Tom McCartney was almost over for a try until a last-ditch Sexton tackle but that was merely a reprieve.

Kieran Marmion feinted right and passed left but it was MacGinty's perfect grubber for Matt Healy that undid Leinster. Healy was never going to lose the foot-race and he dived over to make it 20-10.

Leinster were denied a Zane Kirchner try after a questionable forward pass call. That was evened up, a couple of minutes later, when referee Nigel Owens waved play on despite O'Halloran been in a worrying bundle on the ground. The Blues played the whistle and Sean Cronin got over in the corner.

Sexton's conversion made it 20-10 with 15 minutes to go and, with players dropping like flies, the last remaining soldiers dug deep to see it home.

They finished as they started - looking for tries and chasing glory. It was already their's.

It always was. They believed their dreams and made them reality.


popular
Roy Keane flew home from Qatar World Cup as 'fellow pundits were getting on his nerves'
World Cup 2022 Day 20: All the major action and talking points
Talksport presenter puts Martin O'Neill to the pin of his collar over Declan Rice and Jack Grealish
Roy Keane reveals what he wrote about England during Senegal game
Rory McIlroy explains 'falling out' with Shane Lowry that lasted a few years
World Cup Power Rankings: The top 10 players at the tournament ahead of the quarter-finals
Ronaldo finally reveals why he got that hideous haircut
You may also like
1 month ago
"He saw the potential" - Gavin Coombes on inheriting No.8 mantle from Anthony Foley
1 month ago
Dylan Hartley makes astonishing revelation about Heineken Cup final loss to Leinster
1 month ago
Footage of James Ryan's knee injury shows why Alan Quinlan was so concerned
1 month ago
South Africans may get over themselves, Johnny Sexton is just looking out for his teammates
2 months ago
Irish rugby stars on strongest teammates and biggest gym bunnies in their squad
2 months ago
Josh van der Flier fondly recalls John Muldoon's words to him, after one crunching tackle
Next Page