"And with that, probably a future captain as well. And that's even more pressure on him, now!"

Leinster have won 15 from 15 in two competitions, this season, and are averaging just a tick under six tries a game. At the weekend, Caelan Doris scored one of them and assisted in another two.

Josh van der Flier may have got the flowers, accolades and awards in 2022 - deservedly so, too - and have scored seven tries already this season but Doris and Jack Conan are also in red-hot form. Whenever one of them needs to rest up, Ryan Baird, Scott Penny and Max Deegan are practically salivating for a chance to impress.

END_OF_DOCUMENT_TOKEN_TO_BE_REPLACED

We are used to Doris getting praise on an international level, ever since his 2020 burst onto the Test stage. However, his latest deeds in the Champions Cup have him being likened to a modern-day rugby great.

On the latest House of Rugby [LISTEN from 19:45 below], the crew spoke about the importance of Caelan Doris to Leinster and Ireland's hopes of silverware. Over on BT Sport, too, he was a hot-button topic too. 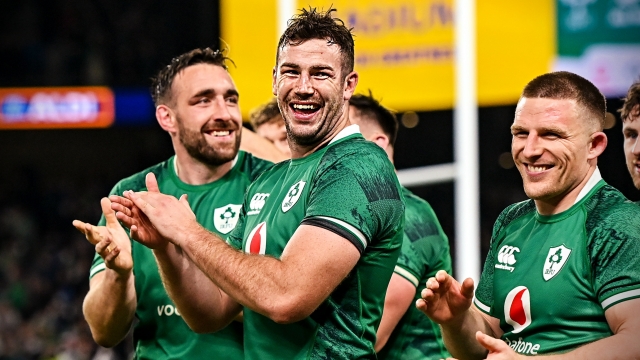 END_OF_DOCUMENT_TOKEN_TO_BE_REPLACED

Leinster went to Kingsholm, last Saturday, and delivered their second Gloucester smack-down in a matter of weeks. They ran in seven tries of their own while, due to poor discipline, gift-wrapping two penalty tries for their beleaguered hosts.

On the BT Sport round-up of all the Champions Cup games, former England captain Lawrence Dallaglio tried not to get too carried away by Caelan Doris... before getting carried away.

"They've got stars all over the pitch," said Dallaglio. "The back row has always been very strong at Leinster.

"Caelan Doris has been on the radar for quite some time. He's improving steadily. He had a bit of a set-back with a head injury that probably pushed him out of Lions contention.

"He is a player that will keep on developing. Some of the handling he has shown - he had three assists against Gloucester - and he's got the carrying ability. He doesn't ruck with the head down, which I actually used to. He's actively looking for teammates to pass to, and offloads all over the field.

"I don't want to big him up too much. There's a lot of really good number 8s out there. He's only 24 years of age and from the evidence of what we've seen, he's got the potential to join the likes of Kieran Read and some of those real greats. He's a really good prospect."

END_OF_DOCUMENT_TOKEN_TO_BE_REPLACED

On House of Rugby, Jason Hennessy recognised Dallaglio as 'one of the greatest 8s to ever play the game' as he highlighted the praise that was bestowed on Doris.

"That is how high they rated Doris," said Hennessy, "and that there is no ceiling for the guy."

"Caelan Doris is just exceptional," said Lindsay Peat. "He's a joy to watch... Jamie Heaslip was one of our greatest players to have played at 8.

"When he was forced into retirement it felt, for a long time, that no-one would be able to fill his shoes. Finally we have someone that is not only capable of matching him but could well surpass him."


popular
Man United could be blocked from playing in the Champions League next season
Man United vs Leeds: Why the game won't be shown on Irish TV
French media's opinion of this Ireland team becomes clear as vital clash nears
Ireland team vs. France: Form players rewarded and a welcome return
Eight players to watch in tonight's Sigerson Cup semi-finals
Clive Woodward happy to 'eat humble pie' after bold comments about Ireland
"I should have been more mature" - O'Sullivan's injury trail a cautionary tale for Sigerson casualties
You may also like
1 day ago
Josh van der Flier's post-match recovery routine could spark a bracing trend
1 day ago
Clive Woodward happy to 'eat humble pie' after bold comments about Ireland
2 days ago
The Ireland team Andy Farrell needs to start when France come to town
3 days ago
Matt Williams wants two changes and Peter O'Mahony benched for Ireland vs. France
3 days ago
Warren Gatland says Andrew Porter needs 'kick up backside' after flashpoint tackle
3 days ago
"Remember that name" - Sonny Bill Williams raves about Ireland U20 star after outrageous try assist
Next Page